You might know that Aurora Cannabis (ACB) has long been a favorite Canadian cannabis stock of mine. You might even know that ACB has long been a staple holding of the "Stocks Under $10" portfolio that I co-manage with my colleague, Chris Versace. There is another name that would have been a good add for the portfolio back in the autumn. Cronos Group (CRON) had been considered, and rejected as my wish at the time was not to become overexposed to one industry grouping. That said, CRON no longer qualifies for that product, but certainly qualifies for mainstream consideration. So... that said... let's go there.

Cronos Group will report the firm's fourth quarter financial results this Tuesday (tomorrow) prior to the opening bell. Expectations are for a break even EPS of $0.00 on revenue of $6.5 million. If the firm is to realize the revenue projection, this would illustrate year over year growth of 300% plus and double revenue quarter over quarter. Revenue is where it's at for cannabis in 2019. One advantage that Cronos will have over a firm such as Aurora moving forward will be deep pockets. The firm should not need to dilute equity anytime in the near future after the investment stake closed on by Altria (MO) earlier this month.

These are the problems. While growth is apparently good, that's because then numbers are still small. This firm only ranks eight among Canadian producers in projected output. Cronos also seemed to be underperforming the competition in cross-border commerce. These pitfalls are where the investment from Altria comes in.

As part of the deal, Altria invests $1.8 billion in Cronos, taking a 45% stake in the firm. The Cronos board is increased from five persons to seven, to include four nominees made by Altria. Altria will also be granted a warrant that if over the next four years were to be exercised in full, would pay Cronos another $1 billion, and leave Altria with majority (55%) ownership.

The reasons why are obvious. Instant credibility. Potential acquisitions that might both diversify the portfolio of products while also boosting production capacity. Lastly, the probability of an increased push toward a higher level of international competition.

What I am thinking is this. On Tuesday morning, profitability will not matter to investors one iota. Revenue matters, but not nearly as much as what management says regarding the stake in the firm taken by Altria and what direction Altria takes the firm. 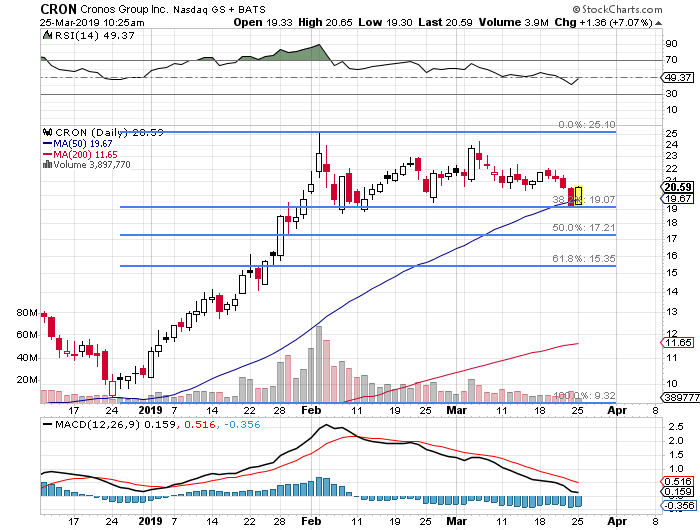 What the human eye sees immediately is just how often over the past six or seven weeks that the 38.2% Fibonacci retracement level has been tested and successfully held. Target Price is tight. I think $25 looks good. There is a way to buy the name here, and put the trade on steroids. Check this out.

Net Basis? Now, it's $15.98. Can you work with that? This brings the potential profit from a forced $25 sale in June to 56.4%, while exposing the trader to the risk of doubling the position to 200 shares should the shares drop below $19 by June. In that worst case scenario the trader bears a net basis of $17.49.

Get an email alert each time I write an article for Real Money. Click the "+Follow" next to my byline to this article.
TAGS: Investing | Stocks | Technical Analysis | Trading | Cannabis