Discouraging News... or one might have thought. Banking earnings? No, though there is more to come... What we have seen there with such a small sampling, at least from the likes of JP Morgan (JPM) and Citigroup (C)  , is that these firms have stayed quite profitable, and probably see something less than an imminent economic catastrophe to their fronts. I am not really surprised to see some managers taking profits in banks that have had a decent two to three week run.

The news that I thought markets might have had a rougher time with was the headline that broke around mid-session that Eli Lilly (LLY) was putting a halt to enrolling additional participants for its investigational Covid-19 antibody treatment. Algorithmic keyword readers did try to seize control over the point of sale, and to be frank, equities were on the cusp of being technically overbought at that point anyway.

After Johnson & Johnson (JNJ) had become the second pharmaceutical corporation (after AstraZeneca (AZN) ) last month to pause Phase 3 trials for a Covid-19 vaccine earlier that morning due to an unexplained illness, investors had a right to venture warily into the afternoon.

These pauses are quite normal as new drug candidates move through the process of clinical testing. We all know this, and under normal circumstances... just don't notice. Covid-19 is quite different though. The pandemic has changed the way everyone lives, even if they have been fortunate enough to this point in evading this evil virus. Covid itself, and any therapeutics or vaccines associated with taking on the SARS-CoV-2 coronavirus, have been placed under a public microscope.

We know nothing about these two pauses that were announced on Tuesday. We do not even know if any participants that have fallen ill had taken the drugs or placebos. We have heard that the Eli Lilly therapeutic bears similarity to the Regneron (REGN) antibody cocktail that appears to have worked well for President Trump. Lilly supposedly has a much larger inventory at the ready than Regeneron. If the pause turns into a regulatory hold, that would be unfortunate. As to vaccines, the two closest to the finish line (in terms of timing) remain the efforts at Pfizer (PFE) / BioNTech (BNTX) and Moderna (MRNA) . Both of these efforts are making use of experimental messenger RNA technology. That makes them different, so the slowdowns at AstraZeneca and JNJ should not mean that one necessarily has to occur with these two.

As far as efficacy and safety, we'll know more when we know more... and we can not know more any sooner than that. There is a positive takeaway (not for the markets) from a public health perspective. I think this. The fact that the development of these drugs has been rushed under "Operation Warp Seed" has cast them under some suspicion so close to a national election. The fact that there have been kinks in the process so close to that election probably means that this rush has come from the right place (trying to save lives and preserve quality of life), and that politics has obviously played a smaller role here than many had previously thought. Just my opinion. A highly unprofessional opinion, but an opinion nonetheless.

As the above news broke, certain types of stocks were pressured over the balance of the day... mostly Materials, Industrials, Energy types, and of course Financials. These are the kinds of names that will do better the sooner economies return to a more normalized state of functionality. Stay at home stocks roared, Work remotely stocks soared. The Communications Sector was the only one of the 11 to finish in the green, but not in the way you might think. Sure, "internet" stocks out-performed the markets, but "broadcast & entertainment" stocks out-performed internet stocks. Thanks mostly to the reorganization that put a bid under shares of Walt Disney (DIS) .

As for the Information Technology sector, performance for the day was extremely varied. Hardware took a tumble, led lower by Apple (AAPL) as investors seemed bored by that firm's line-up of 5G capable iPhones. The semiconductors hung in there. Both the Philadelphia Semiconductor Index (-0.1%), and the Dow Jones US Semiconductor Index (+0.02%) showed a general state of inertia. The market demand was there for software, but not the usuals, not the "cloud kings", save ServiceNow (NOW) , up 1.8%. Demand for software showed up in healthcare related names such as Teladoc Health (TDOC) , and Livongo Health (LVGO) . On that note, Veeva Systems (VEEV) did manage to extend that breakout we spoke of yesterday.

I found Tuesday's action quite constructive. I wrote to you on Tuesday morning that the Nasdaq Composite had done what that index needed to do to confirm for me that markets had regained their upward trajectory... That these recent moves were not some kind of dirty trick. I also wrote to you to say that the S&P 500, though close, had not confirmed this for me just yet.

Breadth on Tuesday appeared to back this up just a bit. Though both the Nasdaq Composite and Nasdaq 100 closed lower (just barely) for the day, winners beat losers up at Times Square by a rough 3 to 2. Advancing volume also beat declining volume uptown while aggregate volume declined. In other words, Tuesday's session was exactly what Nasdaq bulls would want to see on a "down day". No conviction at all. No broad impulse to take profits.

The story was quite different down at my former professional home. While the S&P 500, Dow Industrials, and Dow Transports all surrendered between half of, and one full percent for the session, losers beat winners at the NYSE. By more than 2 to 1. Declining volume beat advancing volume by almost 3 to 1. Aggregate trading volume increased day over day. Panic button? Not quite. Profit taking? You might say so. There was certainly some level of professional distribution experienced across these types of names.

Taken together, the large cap story remains constructive. My bias remains tilted toward what I think does well under a number of risk scenarios. Including a change in tax regimes or having to wait for more fiscal stimulus. This leaves me overweight technology. Still.

Talk about lines in the sand. We already know that House Democrats passed a (net) $2.2 trillion fiscal package that was far more realistic than were prior proposals from that side of the aisle. We already know that after doing an about face on further negotiation, that the president told lawmakers to "go big.'' In fact, the administration has made a very reasonable $1.8 trillion proposal that has been turned down by Democrats that must feel as if their side has the upper hand three weeks before this national election.

Now this. Senate Majority leader Mitch McConnell intends to try to bring the $500 billion "Skinny" bill (remember that one?) to the Senate floor next week. Completely unrealistic? Obviously. In the longer run. A political gamble? Definitely. The Skinny bill includes aid for unemployed individuals as well as small businesses. What's the idea? The idea is perhaps to leave a lasting (at least until November 3rd) impression on voters of just who tried to get aid to households and who blocked what most recently. It's important to remember that the Trump administration and House Democrats are actually much closer on fiscal policy than are House Democrats and Senate Republicans. 2020.

Thinking about refusing to vote for anyone I see, hear or read placing negative publicity on opponents. If you can not tell me something positive about yourself, then why the heck would I vote for you? Unfortunately, this rules out virtually every Democrat and every Republican running for every office. Imagine if we all did this. 2020.

This actually happened on Monday. I never mentioned it due to lack of space, but I thought it interesting. Maybe you noticed that S&P Global Ratings increased Tesla (TSLA) debt to BB- from B+. Don't look now, but Tesla debt is now just two rungs away from being investment grade. Rock and roll. Standard & Poor's cites third quarter deliveries, as well as the production ramp up for the Model Y, which has gone far smoother than it had for the Model 3. S&P now looks for Tesla to deliver greater than 470K vehicles for this full year, and as many as 800K in 2021.

I'd be really careful here. 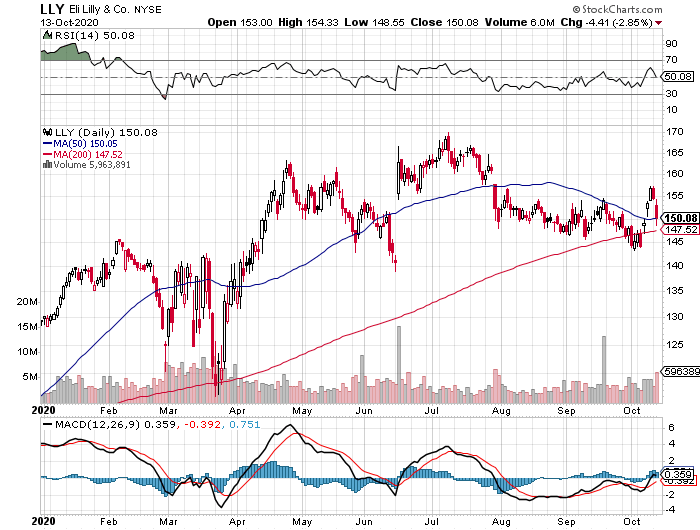 The shares are trading in the low $149's overnight. Should the shares not regain the 50 day SMA at some point after the opening bell, I would wait to see what they do upon testing the 200 day line at $147.52. That, in my opinion, is the highest price that I would pay for an entry point of perhaps 1/8 of intended position size. The stock is not expensive, and does report in less than two weeks.

Expect the last sale to be driven by keyword reading algorithms at least until then. This stock could trade in the low $140's as easily as it could rebound from this negative news should these headlines pass quietly from here.

Get an email alert each time I write an article for Real Money. Click the "+Follow" next to my byline to this article.
TAGS: Drug Approvals | Earnings | Investing | Markets | Stocks | Technical Analysis | Trading | Coronavirus | Electric Vehicles