"Down with the topmast! Lower, lower! A plague upon this howling! They are louder than the weather!" The quote? Borrowed from "The Tempest". Yeah, Shakespeare. What? The words are spoken by the Boatswain during the opening (shipwreck) scene. The Boatswain was a practical sort, capable of more or less maintaining focus on the mission at hand during a crisis. The howling this character referred to was not the wind, but instead the audible worries of the rest of the crew. Anyone who has ever been at sea during a storm of any significance can certainly place themselves in the place of either the boatswain or his crew. Instinct, at least at first... calls upon one to hang onto something solid, and just not let go.

Not too hard. Too hard for what. Too hard to imagine that financial markets should mimic that scene from "The Tempest." After all, given the times, are not the everyday lives of nearly all Americans, no check that, all Earthlings, now reduced to a series of chaotic highs and lows? Are not our lives simply boiled down to a rolling, unscheduled, and certainly unlimited sequence of unpredictable occurrences that model as if a helix wrapping moments of elevated hope with others bearing mounting frustration? I think so.

As I write to you, this morning, it truly is Monday morning, the last moments of Sunday night now long passed. I see the faintest hint of gray to the east, a sure sign that the raccoons will soon be scurrying off to their nests. A sure sign that the birds will soon be calling out. Another day on this side of the dirt, and regardless of all else for this truth, we offer a simple, yet humbled thanksgiving.

Domestic equity index futures markets are off of their lows as I proceed with this edition of Market Recon. That said, those just now rising will likely not find these markets, nor global equity markets in general, much to their liking. I understand, equity markets finished in what looked like strong fashion on Friday. That late Friday rally had as much to do with a flattening of short-term positions ahead of the weekend as anything else.

The problems are multiple. The coronavirus? Still in charge. Infections are increasing across a number of highly populated U.S. states. Now, suddenly, a multi-day rise in known infections in Beijing, a city largely spared at the onset of this pandemic. These events are not to be taken lightly, nor should the negative potential from an economic perspective be underestimated. Safe to assume that while another round of lockdowns seems unlikely, the potential for such an event had not been priced in, here in the U.S. or across Europe. This risk still has to be discounted. That is at least part of what you see before you this morning. The rest of what you see is the marketplace removing certainty. Certainty? Yes, certainty that policy makers will respond with anything resembling an honest coordinated effort, or in the size most likely necessary. (Hint: size will be necessary.)

He Said, She Said?

We'll hear from Federal Reserve Chair Jerome Powell who will testify this week before the Senate Banking Committee on Tuesday, as well as the House Financial Services Committee on Wednesday. Though the week ahead is literally crawling with Fed speakers, this will be where the focus will be. Lost in the shuffle might be Cleveland Fed Pres. Loretta Mester, who will speak publicly every day over the final three days of the workweek (Wednesday thru Friday). Does Mester... who is a voting member of the FOMC this year... has always been quite pragmatic in her approach .... and has often leaned hawkish on rate setting decisions, have something she feels necessary to drive home? This will bear watching. Mester is quite the speaker. Do not underestimate her.

Over the weekend, opinion varied on where the economy might be headed. There was a bounty of optimism offered up by White House economic adviser Larry Kudlow. Kudlow is looking forward to a nice sized pop in Retail Sales for May (due Tuesday morning), still sees the possibility of a "vee shaped" recovery, noted that increased testing for the coronavirus is a contributing factor to rising caseloads in some states, while also inferring that a resumption of elective surgeries may have something to do with rising hospitalizations. For the record, let's all hope Larry's thoughts are spot on because that would truly be the best case for all.

After the optimism, came the pragmatism. Dallas Fed Pres. Robert Kaplan also made the media rounds this weekend. On the CBS show, "Face The Nation", Kaplan explained that experts have told him that it is critical that people widely wear masks, and that there is good testing and contract tracing. Kaplan added that "the extent we do that well, will determine how quickly we recover."

Just an aside, I went down to a town beach with my wife on Sunday afternoon. Very quiet beach, very easy to socially distance if that is the intent. One problem, there is one main narrow path from the parking lot to the beach. (My wife and I are smart enough to use an alternate route.) We sit in our deserted spot, we wear masks until we are sure nobody else is around, and with a clear view of that path (from 200 yards away), we watch the countless groups walk past each other with no masks, and making no attempt even to walk off to the side of the path. In New York. Not off in rural America where maybe the danger seems unreal. Everyone here knows too many victims to count, including many fatalities. I have a neighbor that allowed their high school graduate to hold a back yard party last week, Thirty or 40 kids. Nice kids. That does not matter. No masks. No social distancing. If people have allowed personal codes of discipline and social responsibility to decay to this point at the epicenter of the U.S. outbreak, then only a natural degradation in the virility of this virus can save the community (not to mention the economy).

One more thing... now that we know that there are multiple maladies associated with this virus, the respiratory ailment but one, and now that we know that while the virus itself may last but a few weeks, that recovery for many takes many, many months of agonizingly working through a number of post-Covid symptoms, what kind of effect does that not only have on the quality of life for the individuals involved, and for the families impacted, even if they survive? How about the impact on the economy in general? These people may be unable to work for a very long time. They certainly will not be spending on recreation. What then?

On that note, New York Governor Andrew Cuomo, whom I do not always agree with politically, but I feel is an extremely effective communicator, had something important to say on Sunday. Cuomo and I both grew up in Queens, NY. He was older, but I knew who he was, and I knew his younger siblings. Hence maybe why I like his manner of speech. Cuomo acknowledged 25K statewide complaints of reopening violations. Manhattan in New York City and the Hamptons out on the eastern end of Long Island were singled out as problem areas.

After seeing what other states that reopened well ahead of New York, and given the enormity of what New York (and new Jersey) have been through, would the governor reinstate partial shutdowns? The complaints are largely focused on bars and restaurants, so the situation is sticky. You are talking about small businesses. You are talking about livelihoods. You also have to be alive and have live customers to have livelihood. These customers also have to feel well to want to go the a bar or a restaurant. Not now, but next month, or two months after that.

My thought? I understand that restaurants may not make it at partial capacity. I do not have that solution. Masks, though? Who is really the sheep here? The one who wears a mask out of respect for the other guy? Or the guy who thinks it doesn't look cool, and because of that is then willing to roll the dice? Don't downplay it.

Equity markets will open weakly on Monday. For many traders, ServiceNow (NOW) has been the 'Cloud King' that got away. Yet the shares have traded sideways for more than a month. Take a look. 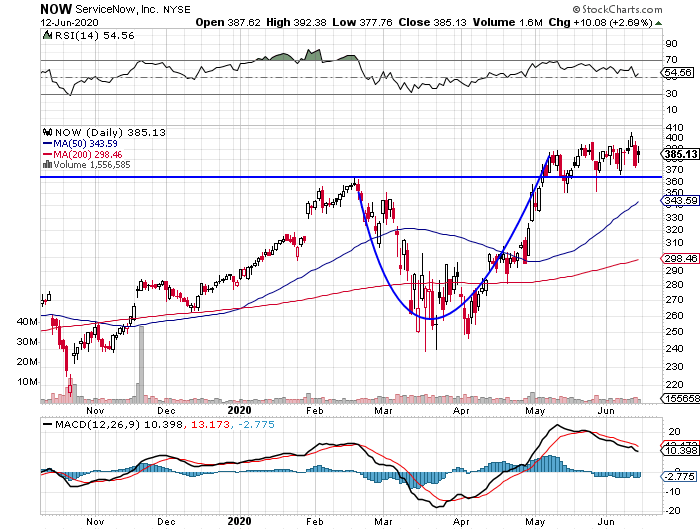 Upon that "break-out" a likely target price for a break-out on the $360's would probably be in the $430's. Yet, we see that share shave instead moved sideways to higher, while using the pivot as support upon multiple occasions. The shares are trading lower this morning, I see a last sale of $378. Now, an investor interested in getting involved in this name at a discount could try the following...

Worst Case: NOW goes lower through expiration. The trader ends up long 200 shares at a net basis of $346, with the shares trading below $360.

The Fed (All Times Eastern):

Get an email alert each time I write an article for Real Money. Click the "+Follow" next to my byline to this article.
TAGS: Economy | Federal Reserve | Investing | Markets | Stocks | Technical Analysis | Trading | Coronavirus