Confident aggression or is it aggressive confidence? I am not quite sure. I do know that I like very much what I hear from Pfizer (PFE) regarding that firm's collaboration with German drugmaker BioNTech (BNTX) in the effort to find a well tolerated, effective vaccine to aid in the global fight against Covid-19.

Oh, Pfizer reported quarterly earnings early last week. Interestingly, even though the firm did beat expectations for both earnings and revenue, that revenue decreased year over year, and the release actually served to put a halt to five week rally. The shares have traded sideways since. Even more interestingly, across business segments, there was nice growth in Internal Medicine, Oncology, and even in Rare Disease. Not so much in Vaccines, or Inflammation & immunology though.

The best part of what Pfizer put to the tape on earnings day, even if it was a generally good quarter, was the guidance. The firm reaffirmed the corporate outlook for both earnings and revenue for the full year. While that is a neat trick this quarter, that is not why I am here. That's not what provoked this piece on this Tuesday morning.

The Need For Speed

There are now more than 100 potential vaccines under development worldwide as science rises to the challenge of defending the human race. At least eight of these hopeful candidates are already in human trials. We have written often in this space on bio-tech firm Moderna (MRNA) . That firm actually went into human trials back in March and has come to an agreement with Swiss based Lonza Ltd. in order to increase scale rapidly should those trials proceed well. We have already discussed Johnson & Johnson (JNJ) , and that operation's plan to go into human trials by September if everything goes as planned. JNJ believes that the firm could produce between 600 million and 900 million doses by the end of Q1 2021.

That brings us to Pfizer. Last Tuesday (earnings day) Pfizer CEO Albert Bourla appeared in the financial media. Bourla spoke of "millions" of doses sometime this year and then hundreds of millions by next year. During the call, the firm indicated that there could be such a vaccine candidate that might be ready for emergency use in the U.S. late Q3 2020 into Q4. That's not just fast, that's incredibly fast. The very next day, Pfizer and BioNTech announced together that the very first humans had already been dosed in Germany for a Phase 1/2 clinical trial. Just 12 people. The plan was to get regulatory approval for testing BNT 162 in the U.S. as well.

This morning, Pfizer and BioNTech again announced jointly that human trials have now begun in the United States. In one respect, this effort is barking up the same tree as the effort made by Moderna. That is the use of messenger RNA. There has never been a vaccine developed through this method that has come to market, as vaccines have traditionally used weakened strains of a virus in order to provoke immunity. The idea is that this kind of "high-tech" vaccine could instruct healthy immune systems to behave differently so that the infection can not make use of the proteins that it needs in order to invade and take over inside of an individual. Additional benefits should messenger RNA vaccines prove successful would be the increased speed of manufacture, as well as improved stability of the finalized product.

The plan for Pfizer and BioNTech in the U.S. is to start with 360 healthy volunteers at the beginning and then, according to the New York Times, add up to 8,000 more by the end of the second stage. The need for so many is due to the fact that there will be several groups created so that four variations of the BNT 162 vaccine with slight differences in the formatting of genetic instructions to be followed by an individual's internal response. 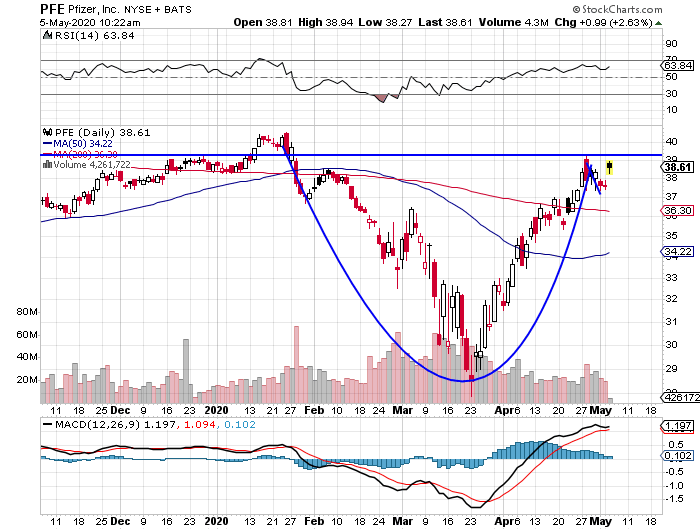 Well for one, shares of Pfizer do pay out $1.52 per year, so with a 4% yield, if this does not work out, the name can be placed in a revenue producing portfolio without a problem. What I see, even as Relative Strength improves, is the completion of a cup formation that has developed a short handle. If I am right, that puts the pivot at just about $39.25. We see failure there, the first line of support probably lines up at the 200 day SMA ($36.30). The daily MACD is extended so there is reason to think that this approach may fail on its first attempt.

On the other hand, should these shares show an ability to take the pivot, a $47 price target is realistic. My thought is this: With some exposure to Moderna and Johnson & Johnson, not to mention Gilead Sciences (GILD) , it probably isn't wise not to cover the bases, and covering the bases means including one of the largest U.S. drugmakers with a global reach and certainly a high level of confident aggression going into the project. Besides, I still have some Tyson Foods (TSN) to sell, and something to do with the cash created.

(Johnson & Johnson and Tyson Foods are holdings in Jim Cramer's Action Alerts PLUS member club. Want to be alerted before Jim Cramer buys or sells these stocks? Learn more now.)

Get an email alert each time I write an article for Real Money. Click the "+Follow" next to my byline to this article.
TAGS: Drug Approvals | Earnings | Investing | Stocks | Technical Analysis | Trading | Pharmaceuticals | Coronavirus