By now I am sure that most readers have seen the headlines regarding Costco (COST) . The stock soared this (Thursday) morning on news that the warehouse retailer had posted March total comparable sales growth of 17.2%, with net sales up 18.7%, totaling $21.61B. Excluding fluctuations in gasoline prices and currency exchange rates, total comps increased an adjusted 12.2%. This was all versus consensus view for 11.2% growth.

Membership fees were up 9.8% as the reporting period ended with 114.8M cardholders and 27.1M paid executive members. Renewal rates were 92% in North America and 89.6% globally. The balance sheet offers up an acceptable (but not great) current ratio of 1.03, while tangible book ran at $43.81 per share. Free cash flow hit the tape at just under $5 per hare. In other words, Costco was, and apparently still is executing at a very high level.

A funny thing happened the next day, March 4th, when I wrote my piece updating my view on Costco. The stock sold off 1.42% and had been down as much as 4% during the regular session. At the time, I suggested that perhaps a double bottom reversal pattern that I had been tracking might have failed. (It did not.) I did not suggest adding to or initiating a long position in the equity at that time, as I needed to see what the chart did next. I did however, suggest going long an April 14th (next Friday) $520/$540 bull call spread for a net $8 to $9, depending on execution. That spread, if one is still long it, can now be skillfully sold for approximately a net $20. 100% plus in about five weeks ain't too shabby in this market, but what now, Sarge... What do we do with COST now?

The stock gapped up this morning. Trading well above both sides of that spread. Take the profit? My feeling is that you are probably not going to get more than $20 for a spread where the strike prices are $20 apart, so yes... I think you take that profit. 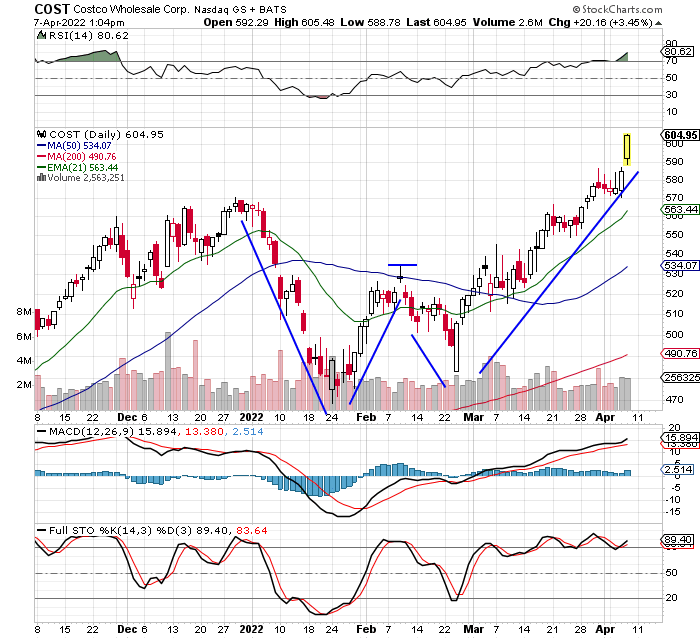 The question becomes... Is there more to go? In a tough market like this, I see that Relative Strength is extended as are the Full Stochastics Oscillator and the daily MACD. That tells me not to chase... not to add or initiate today. Fact is that Costco is the kind of retailer that does well when times are difficult. They sell the stuff you need and they sell it at bulk for a fair price. Think you really needed them during the height of the pandemic? How about during the era of high consumer prices, mass shortages, and a slowing in the pace of economic activity?

Readers will note that the double bottom pattern that I doubted one month ago has proven itself. That makes the pivot $534. That would place my target price at $640, and that's conservative because the stock does trade at 45 times forward looking earnings, which does make me a little uncomfortable. If COST ran with a Target (TGT) or Walmart (WMT) like valuation, my target would likely be in the $660's.

Instead of just tossing capital at a $600-plus a share equity, that I really do want to own ahead of a May 26th (probable) earnings release, my suggestion is to sell (write) discounted puts with a May 27th expiration date. Currently May 27th COST $575 puts can be sold for about $12.20. If that strike seems a little risky, the May 27th $550's can be sold for a rough $8.75. Takes the risk all the way down to $541.25 for a stock trading at $607 as I bang out this note. Know what? I think I talked myself into it. I will write some of these puts after I see this article in publication so I don't front-run the public.

(Costco and Walmart are holdings in the Action Alerts PLUS member club. Want to be alerted before AAP buys or sells these stocks? Learn more now.)

Get an email alert each time I write an article for Real Money. Click the "+Follow" next to my byline to this article.
TAGS: Investing | Stocks | Technical Analysis | Trading | Retail | Consumer Staples | E-Commerce | Consumer Products