Perhaps the most consistent of all U.S. retailers did it again. On Thursday evening, Costco (COST) released the firm's fiscal second quarter financial results, and those results were strong. Again. For the period ending February 13th, Costco posted GAAP EPS of $2.92 on revenue of $51.9B. These numbers decisively beat expectations on both the top and bottom lines. Perhaps the most impressive part of this story lies in comparable sales for the three months.

The firm also broke out February comps as it does regularly provide monthly sales updates. For the month of February which is partially, according to the firm's fiscal calendar, in the current quarter, total comp sales were up 14%, adjusted down to 10.6%, while e-commerce sales increased 10.2%, adjusted up to 10.4%.

Turning to the balance sheet, Costco's net cash balance stands at $12.296B, up from 12 months ago, but down sequentially. Current assets printed at $32.565B, up from November, driven primarily by growth in accounts receivable. Current liabilities decreased from November to $31.545B as accounts payable declined. The firm's current ratio now stands at 1.03, which is not as high as I would like, but it does pass the Sarge test, and might be considered understandable given that the firm has had to maintain an elevated level of inventories for about six months now.

Total assets amount to $63.078B, which easily outweighs total assets less equity of $43.102B. Total debt is down to its lowest level since February of 2020. Tangible book value is up to $43.81 per share, while free cash flow is up $4.97 per share. This balance sheet and these fundamentals get a passing grade.

Costco CFO Richard Galanti spoke to the possibility of raising membership fees in response to a question. Galanti, in my opinion, was kind of evasive, as I guess he had to be. Still, put that idea in the back of your heads as a possibility for later this year. With costs rising, and pressure on margin, which is not really happening just yet, will in all likelihood be expressed as an increase where it counts most, in recurring revenue. The market would take that very well. Galanti also mentioned the possibilities of a special dividend, and an increased regular dividend in response to another question. 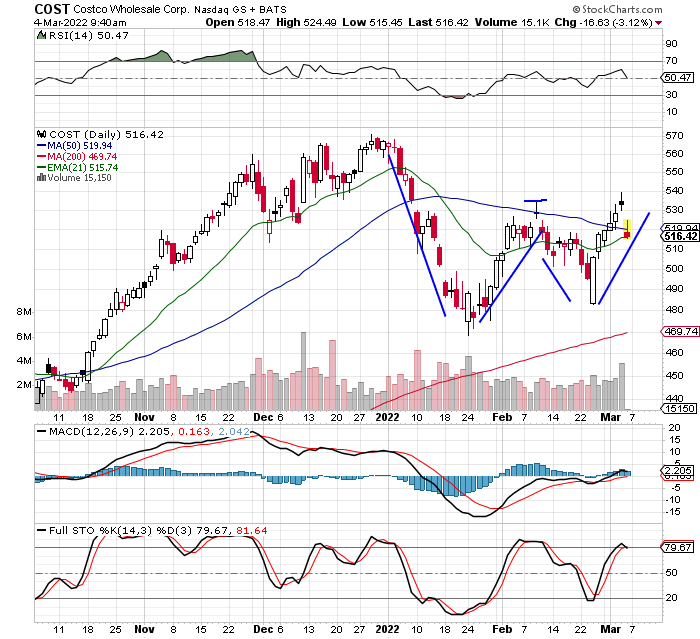 The selloff this morning in shares of COST puts a "fail" on the attempted breakout of a double bottom pattern with a $534 pivot. Both relative strength and the daily MACD are rather neutral, however, the Full Stochastics Oscillator is coming off of an overbought reading.

There is a chance that this morning's weakness ends up adding a handle to what eventually will look more like a cup than a double bottom. In that case, the pivot would move to $538. I'm not buying the name on this dip. Not that Costco has done anything wrong. They are executing exceptionally well.

Target (TGT) trades at 15 times forward looking earnings. Walmart (WMT) trades at 20 times. Now, Costco deserves a higher multiple than those two, but at 41 times in this environment.

I need this chart to tell me something more defined before I spend my cash on equity. If you need to spend some dough, a COST April 14th $520/$540 bull call spread will cost you a net $8 to $9. That's a little safer.

(Costco and Walmart are holdings in the Action Alerts PLUS member club. Want to be alerted before AAP buys or sells these stocks? Learn more now.)