Costco's (COST) earnings report to end the week didn't excite me. Don't get me wrong, the numbers were good, but after a 46% run year-to-date, they weren't exciting. The company produced earnings per share of $1.90 on revenues of $37.04 billion. Expectations sat at $1.71 per share on $37.22 billion in revenue, so we have a bottom-line beat on a top-line number that is essentially in line with expectations. The EPS beat of $0.19 looks huge, but it was aided by a $0.17 tax benefit, although not uncommon for Q1 historically, it is worth noting that the bottom line may not have been as strong as the headline suggests.

The company's struggles revolved around e-commerce this quarter. While Thanksgiving fell late this year, Costco saw its website go down for the better part of a day over the weekend. With e-commerce sales up only 5.7% after rising in the mid-20 percent range the previous two quarters, the outage can explain some of the shortfall but I'm hard pressed to say it accounts for all of the shortfall. Costco's management essentially stated the e-commerce growth and overall results do not accurately reflect the strength of the underlying business. In part, that's true, but the numbers reported weren't as strong as they looked either. That's a bit of a wash in my eyes. 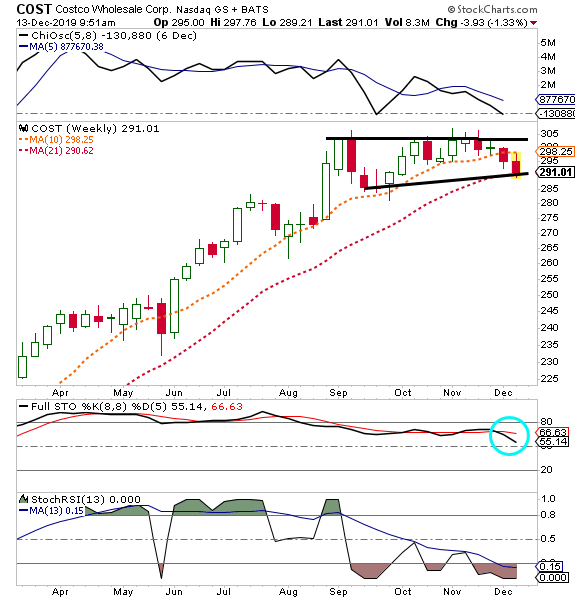 The technical picture may be the most troublesome aspect surrounding Costco. As the stock has retraced from the $300+ area over the past month, we've seen several indicators rollover in bearish fashion as bulls cling to support to end the week today. The bearish break lower in the Full Stochastics indicator is the biggest red flag. We haven't seen a break of this fashion in over a year. The last one did not end well for the bulls as the stock fell 10%. The StochRSI remains oversold, but has been since September. A push higher is worth watching, but with the Chaikan Oscillator falling as well, I have major concerns if we close under $290. If that happens, I'd expect to see the stock test $270.

I understand the appeal of buying at support, and I can see folks nibbling at Costco here with the stock at support levels dating back three months. Additionally, the 20-week simple moving average (SMA) and 21-week SMA both sit around $291. If you plan on pursuing that strategy, I'd keep a tight stop under the stock or simply use an in-the-money call with a short-term expiration and roll it up if the stock is rising. I'd actually consider two or three-week increments with a call that is $5 to $8 in the money to minimize time decay and maximize participation. Using a collar strategy could work here as well.