When it comes to retail, in the year of the pandemic, there is Amazon (AMZN) , the undisputed champion of e-commerce. Then there are the brick and mortar retailers that had already evolved in order to become more competitive prior to the pandemic. We'll lump Walmart (WMT) , Target (TGT) , and Costco (COST) in this group. Then there's a gap, a wide gap in between these three and the next group.

You want a blue shirt, or a pair of sneakers, you'll check Amazon, then maybe the websites of Walmart or Target before making that decision. You probably aren't checking the Macy's (M) website for that blue shirt, or the Dick's Sporting Goods (DKS) site for the sneakers. You might be, but most of you are not. You need a case of canned string beans, or a large pack of paper towels, you probably check the Costco site first, then maybe Walmart or Target. Fresh bananas, then you probably hit the "Whole Foods" tab on Amazon's page. What all of you are doing less and less is setting foot inside of physical retailers as first the convenience of e-commerce, and then the fear of contracting Covid has shut people into small areas, interacting with fewer individuals.

Costco went to the tape with the firm's fiscal first quarter financial results on Thursday night. The firm posted adjusted EPS of $2.29, which beat the street by about a quarter. Funny thing about Costco's adjustment. It was downward. Many firms adjust for impairments in order to dress up performance. Costco took an adjustment for a tax benefit amounting to $0.33 per share. That means that GAAP EPS (the real kind) landed at $2.62, absolutely crushing consensus. Sales ended the period at $43.2 billion, up 16.6% year over year, and beating Wall Street's view by almost a billion dollars. You would have thought that the sell-side might have come a little closer in their expectations given that Costco updates the public on sales and comps every month.

That brings us to comp sales, which were spectacular. Adjusting for both gasoline prices and currency exchange rates, comparable sales increased 17.1% (US: 17%, Canada 16.8%, Rest of planet: 17.7%). E-commerce? Moon shot. Between those picking up curbside and those ordering delivery, e-commerce picked up by an adjusted (gas & FX) 86.2%. Just an aside, as someone who does order from Amazon, Walmart, and Costco online, early on in the pandemic Costco online was a distant third among the three, vastly inferior in delivery times and in reliability. Now, I will be eternally grateful to both Amazon and Walmart for keeping my family well-stocked when New York shut down last spring and I was at my sickest, but I will credit Costco for improving their game tremendously. Now that New York heads back into the abyss of widespread misery, this time with the rest of the nation already there... Costco is keeping up with the competition.

If you don't own the shares, you've already missed it, but Costco will reward shareholders of record this past December 2nd with a special $10 dividend payable today (Dec 11th). I also find it interesting that membership is growing at a 7% clip. This helped generate $861 million in fees, the firm now has over 59 million cardholders, up a million from a year ago. In addition, gross margin increased to 11.55%, half a percentage point from last year, when there was no pandemic. That's impressive. This despite spending on improving the logistics involved in making the e-commerce experience better. This despite a net expansion (eight stores) of the firm's brick and mortar presence. No matter how you slice it, this is a successful, well managed firm, executing at a high level in a tough environment at this point in the game. I am very impressed.

Year over year sales growth of 17% is outstanding. No doubt. This comes after 12% (Q4) and 7% (Q3). In fact, COST has not seen 17% in any quarter any time recently. Is this sustainable? I think we can certainly expect pandemic winners to keep winning for the current quarter and maybe even next quarter. Then, with a little luck, and the grace of a merciful God, a return to some level of normalcy. Maybe.

Will physical retail draw from e-commerce? To some degree of course. I don't ever see a reversal in shopping trends where a majority of people would go back to the ways of years past en masse. Oh, there will be "shopping trips", as something novel, and firms like Costco, like Walmart, and like Target are well set up for that too. Costco is more expensive in regards to either of those two in terms of forward looking PE ratios. That said, shopping at a physical Costco is a little fun. Admit it. Would you say that about Walmart or Target? I don't, but I do think you can win, owning all three and Amazon. As for the rest of retail, only if you sell something special, like a Home Depot (HD) or a Best Buy (BBY) , and yes, I saw the Goldman Sachs downgrade.

Give a Little Whistle 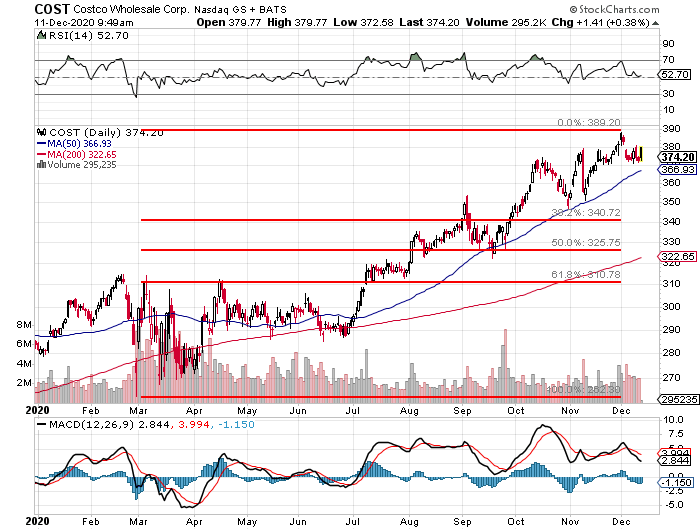 Don't know what to do? I think, and this is just opinion, that when it comes to COST, traders can always (well, at least since the pandemic started) let the 50 day SMA be their guide. If a trader had simply added small every time that the stock tested that blue line since March, that trader would be up a boatload year to date. That's my plan for today. If I do buy some, you can bet your last dollar that I'll write something. Probably calls expiring in a month that will pay me $3 or more against the position.

(Costco, Amazon, and Walmart are holdings in Jim Cramer's Action Alerts PLUS member club. Want to be alerted before Jim Cramer buys or sells these stocks? Learn more now.)

Get an email alert each time I write an article for Real Money. Click the "+Follow" next to my byline to this article.
TAGS: Earnings | Economy | Investing | Markets | Stocks | Technical Analysis | Trading | Retail | E-Commerce