"The Omega Man". What a great movie. Scared the heck out of me as kid. Last night I lived it, albeit without the zombies. Briefly this morning, in Market Recon I made mention that I found myself in my local Sears (SHLDQ) last night. The place was empty. Not an exaggeration. There were clothes on the shelves. There were some shoes, some tools, and even some jewelry in the appropriate departments. There were two things missing that took me by surprise. Shoppers and staff. Eventually, I did find both, but it took a bit of walking around. I walked both floors in their entirety. I found three employees in total, two of whom were manning cash registers, and perhaps eight or nine shoppers. The prices on the goods were low, real low. There were signs offering consumers large kickbacks based on ticket size.

On my way to this Sears, which is mall-based, I drove around what used to be our J.C. Penney (JCP) . That entire store is now closed. You could play roller hockey in the shared parking lot and not worry about cars. On the way out of Sears I walked through the mall. Holiday season. Some stores had a few shoppers inside. Most did not. There were a few more people in a quiet food court, and a very short line to see Santa. Again, this is a Wednesday night at the cross-section of two busy boulevards two weeks ahead of Christmas.

There are a few traditional retailers left that appear to have figured it all out. None are true department stores. All offer a valid e-commerce alternative to their physical presence as well as something in the way of perceived value. Walmart (WMT) and Target (TGT) come quickly to mind. Both remain steadfast in their rivalry with each other, and with Amazon (AMZN) as well. I think one has to include Costco (COST) , though the model is different as this one is a club that shoppers must pay to join in order to reduce per unit expense through bulk purchasing, as a major player in the space, and they have been for a long time now. Costco will report the firm's financial performance for their fiscal first quarter after the close of business this (Thursday) evening.

I see that at least 26 analysts cover Costco Wholesale. Across that community, consensus view is for EPS of $1.71. Whispers are running a few pennies higher than that. Revenue is expected to print at $37.3 billion. That would be earnings growth of more than 6% compared to the same quarter a year ago on sales growth of more than 6% by the same measure.

What do we know already? We know that the National Retail Federation stated in early December that shopping traffic (in stores and on-line combined) was up 14% nationally for period spanning Thanksgiving through Cyber Monday and that spending per consumer was up 16% for the same period. A day later, Costco reports that comparable sales were up 5.3% for the month of November. That was versus consensus of 4.0%. In other words, Costco came roaring out of the gate for the holiday season.

Now, I realize that this is simply anecdotal, but my local Costco is just across the street from my local mall. Upon leaving the mall last night, I decided to compare, so I paid a visit. You know what I found at Costco? I found shoppers aplenty. The parking lot was almost full. The place was well staffed, and there were several longer than I expected lines at the registers. The people in my neck of the woods were indeed shopping this holiday season and doing it in person, just not where they used to. That reminds me. I'm running low on office supplies. You know where I will go to purchase them. I know you do. 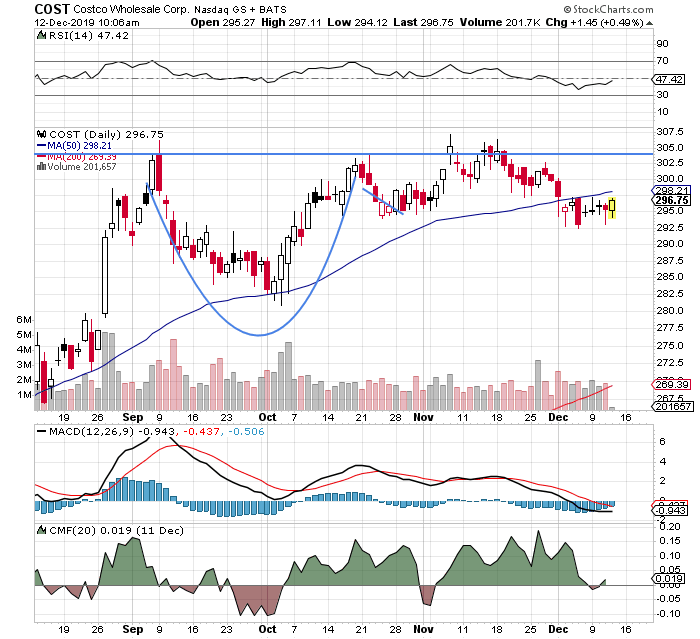 My eyes are quickly drawn to the September through October cup with handle pattern that failed to produce a breakout. Could that failure be a product of the trade war with China? Well, it certainly does not help. The presidential tweet on Thursday morning lends this investor some cautious optimism as far as that goes. I have also been through the ups and downs of these negotiations along with the rest of you many times. It becomes difficult to get too high or too low based on a tweet.

That said, the obvious positives are the upward curl we now see for Relative Strength as well as the 12 day EMA component of the daily MACD. An obvious negative would be the resistance provided by the 50 day SMA all December so far. That line now stands at $298. It is my belief that a positive report this evening will allow portfolio managers to take that line with some momentum ahead of Sunday's trade deadline. I am likely to get long an entry level sized position today, despite the shares still trading on the southern side of resistance.

The idea would be to add on a Monday selloff, or add on momentum if that momentum is not out of control.

Notes: The trader needs to see COST trade at $301.65 by a week from tomorrow (next Friday) in order to profit from this trade. In order to partially subsidize the purchase price of the call, the trader has also agreed to expose him or herself to equity risk at net basis of $291.65 at expiration with the shares trading below $290.

Get an email alert each time I write an article for Real Money. Click the "+Follow" next to my byline to this article.
TAGS: Earnings | Investing | Options | Stocks | Technical Analysis | Trading | Retail | E-Commerce