Wednesday morning melted into Wednesday afternoon. The feeling started to settle in. Remember January 2018? Remember that feeling? A whisper that maybe recent gains in equity prices had been won, but certainly not earned. A spider sense? Would not go that far. Markets can do whatever markets will do. The right word here, or the right word there. Actions taken by central bankers that algorithms read as an expansion in overall conditions of liquidity obviously change everything. Lacking anything that reads like that? The bots will chase each other. That's what they do in the year 2020. Passive styles of investment tend to exacerbate market direction.

There will still be some dip buyers. The last of the stock pickers will dig their trenches somewhere. That's why equity index futures have largely hung in there overnight. Global equities are lower, but nowhere on the planet is there an old fashioned dumpster fire.

The closing bell rang out loud. All-time closing highs for the Dow Jones Industrial Average, for the S&P 500, and of course for the Nasdaq Composite. Trading volume was strong. Winners trounced losers both uptown and downtown. The Energy sector led the way, as market prices for the underlying commodities found some relief. Communication Services as well as Information Technology were also hot. Within that group, semiconductors were hotter than was software, and why not? The spread of this dreaded virus, Covid-19 had slowed in China. So it appeared, there would be an unleashing of pent up demand from that corner of the world.

Then it happened. S&P futures did their best impression at first, of a pea rolling off of a table, and then of that pea landing on a gentle downward slope as its journey continued. What happened? Suddenly, newly confirmed cases of the Covid-19 virus spiked from Hubei Province in China, where the city of Wuhan is located. 15,000 of them. The number of related deaths increased as well. In fact, roughly 25% of all human beings who have had a confirmed diagnosis of Covid-19 since Moses wrote the Book of Genesis have been reported since that closing bell on Wall Street on Wednesday evening.

That's why S&P futures are lower on Thursday morning. That's why OPEC and the IEA are cutting estimates for the demand for oil. The IEA projection by the way is for global demand for 2020 to drop to 2011 levels. This is why the Chinese government is replacing local leaders in impacted areas, while school closures are being extended well into March. This is why Bruno Le Maire, France's Minister of the Economy and Finance, is out speaking on the knock on impacts to both Global and French GDP of a damaged Chinese economy.

Outside of China... a fourteenth case was confirmed in the United States, at Miramar Marine Corps Air Station (San Diego, CA), among those having been evacuated from the Wuhan area... another 44 cases were confirmed aboard that cruise ship Diamond Princess in the port of Yokohama (Japan), increasing the number of infections on board to 218... and Vietnam has apparently put the community of Vinh Phuc (not far from Hanoi) under lockdown, impacting roughly 10,000 residents.

Just scanning some industry leaders from the record breaking action on Wednesday. I see within the Consumer Discretionary sector that the Dow Jones U.S. Gambling Index soared 2.65%, while the Dow Jones U.S. Hotels Index was up 1.42%. Both of those indices ended the day trading back near their highs. You do know that at least part of this flow will likely go the other way on Thursday morning, correct? Oh, while you're thinking... while technically an Industrial industry, the Dow Jones U.S. Airlines Index spiked 1.57% on Wednesday. Same story there, closed testing a previous high.

Run To The Hills

In Wednesday's Real Money "Stock of the Day" piece we discussed properly timing a withdrawal from, or reduction in exposure to, fossil fuels or "big oil". We did acknowledge that for dividend investors, that maybe do not need to follow all that closely the market performance of those equities, that this dividend revenue could be tough to replace.

Well, I run a dividend book myself. I do have some ideas. Two names reported on Wednesday that might warrant some attention. One, CVS Health (CVS) , yields 2.71%, and is dirt cheap. The other, Cisco Systems (CSCO) , yields 2.88%, and while undergoing a painful transition, and indeed exposed to China can not be called expensive in the least. This name will trade at a discount on Thursday morning. I am already long that one with an absurdly low net basis, so I don't know if it trades low enough for me to add today, but if I were flat? Entry would be an idea. Obviously, these are both Sarge names.

AbbVie (ABBV) is another name that I have thrown at you in the past. That one has been knocking the cover off of the ball, will soon enough close on the acquisition of Allergan (AGN) which should act as a firewall versus any losses in market share related to the Humira patent which will expire in the U.S. in 2023, but already has expired in Europe. AbbVie yields 4.83%

Now for something completely different... Store Capital (STOR) , a nation-wide net-lease REIT operating in every state. This firm engages in the acquisition, investment, and management of real estate properties. The clientele could be anyone really. Retail, restaurants, movie houses, health clubs, manufacturing facilities... anything. Why bring this firm up now?

Well, STOR reports next week. Wall Street is looking for EPS of $0.48 on revenue of $172.7 million, or growth of more than 17%. Those numbers are not why this one caught my eye. STOR pays shareholders $1.40 annually for a yield of 3.59%. The shares sold off a bit on Wednesday as investors sold the long end of the U.S. Treasury Curve. That said, the 10 year is knocking on the three month's door again this morning. I would think that plays well for the REITs.

Your old pal has already started reducing exposure to big oil. By sometime later today, this name will be in his portfolio. 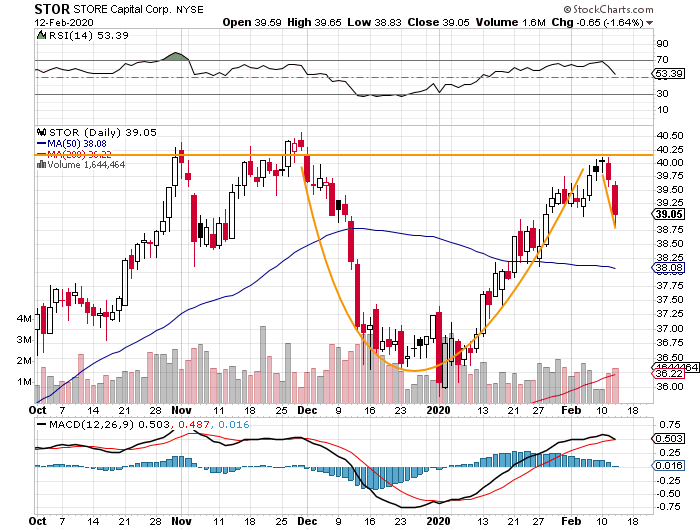 I could paint you a picture of a cup with a handle pattern, or we could just save this chart. Yes, Relative Strength is off a bit. Yes, the daily MACD looks like the 12 day EMA is about to cross over the 26 day EMA (that would be bad). But, and this is a big but, should the risk-off behavior across financial markets early this morning hold throughout, those conditions, I would think might improve.

I would like to pay something close to the 50 day SMA. However, I am willing to initiate entry somewhere close to the last sale. Our pivot will be the $40.15 level. We see that, and by virtue of catapult, the target would be set at $48. Understand though that the objective here will be revenue over price appreciation. Oh, before I go... Kraft Heinz (KHC) , don't laugh... pays 5.33%, and the stock has traded in a very tight range for a year. May add that one as well.

Get an email alert each time I write an article for Real Money. Click the "+Follow" next to my byline to this article.
TAGS: Dividends | Investing | Markets | Oil | Options | REITs | Stocks | Technical Analysis | Trading | China