Take a deep breath. If I had not already realized that U.S. investors were becoming more concerned in their cognizance of global realities as they raced for the proverbial exits late in the Friday session, their aggregate awareness of current events was indeed confirmed for me over the weekend. I hit the gym early on Sunday morning, met up with my usual crew. The talk? Certainly not of last night's Super Bowl (these are regular guys, not financial type fellows), but the topic of conversation (before I got there) was of whether or not the Shanghai Stock Exchange could open on time (it did) on Sunday night. The mere fact that these guys were discussing something that they would never usually discuss really took me by surprise. One fellow even hopefully mentioned his optimism that we could keep meeting up for these weekend morning workouts, but that he would not show up if this coronavirus emerged in our area. Overreaction? I guess we don't known the answer to that question until we know.

As mentioned above, stocks in Shanghai did manage to open on time... down 8.7%, then "rallied" a bit, finishing the day closer to a decline of 7.7%. Better than expected? Many were looking for the Shanghai Composite to drop 10% on Monday. This is positive? Not really. According to Bloomberg Radio, more than 3,000 stocks hit "limit down", which is -10%, and closed early for the day... so we don't really know. This was also after the People's Bank of China (PBOC), the nation's central bank, injected $173 billion worth of liquidity into money markets, the largest single day open market operation made by the PBOC since 2004.

What also know, is that Industrial Profits declined in China by 6.3% for the month of December. This data was collected prior to public awareness of the outbreak of this virus. What that means is that the Chinese economy was limping badly into year's end even prior to the shutting down of transportation in and around many cities.

Concerning the illness, there are now, according the latest information that I see... 17,417 cases confirmed globally. 17,234 of those are in Mainland China, and 11,177 of those are in Hubei Province (where the city of Wuhan is located). Yes, a few more cases emerged in the U.S., and a patient passed away in the Philippines, the first death attributed to this virus outside of China. The virus has now caused 362 deaths, but 489 patients have fully recovered, meaning that at some point over the weekend, the survival rate finally surpassed the rate of mortality.

The big questions for China, and beyond that, planet earth, are how does China get back to work? How will Chinese demand for goods and services as well as dramatically reduced Chinese production impact U.S. corporate performance? Surely, there will be, at this point, both pressure on margins as firms attempt to move supply lines that run through China, and then perhaps actual scarcity as inefficiencies are revealed for the short-term at a minimum. Higher consumer prices for specific goods, even as demand for industrial commodities plummets? Would that really shock anyone?

On the bright side, fourth quarter earnings have been solid. According to FactSet, with 45% of the S&P 500 having reported, the blended rate (quarters already reported mixed into quarters still expected) of earnings growth has improved to -0.3% y/y from -1.9% just one week ago. Over the past week, the blended rate of revenue growth has improved from 2.9% y/y to 3/1% as well. That said, as the coronavirus has continued to slow economic activity, analysts have ratcheted down both Q1 2020 and full year 2020 earnings expectations quite broadly.

Sticking with the numbers posted by FactSet, the S&P 500 heads into the new week priced at 18.4 times forward (12 months) earnings, down from 18.6 times a week ago. Obviously, as Treasuries at the longer end of the U.S. curve have significantly outperformed equities this past week, the Utilities (the only sector higher for the week) enjoyed some multiple expansion, while markets let some air out of the Energy, Information Technology, and Consumer Discretionary sectors. Of course, Technology can hardly be considered one sector at this point, as investors have fled semiconductors in anticipation of reduced Chinese demand while running toward software/cloud type names.

U.S. traders need to be cognizant of the fact that many stocks are currently engaged with their 50 day simple moving averages (SMA). The Dow Jones Industrial Average failed that line on Friday, while both of our major small cap indices (Russell 2000, S&P 600) surrendered earlier in the week. Perhaps quite significantly, as the Nasdaq Composite has yet to face this test, the S&P 500 managed to find just enough to defend that line late in the Friday session. 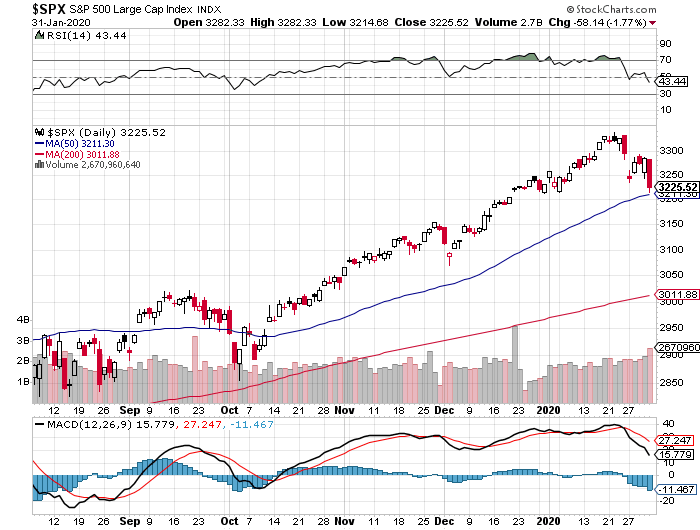 Not only does this week present as another active week in terms of high profile earnings releases, this is also "Jobs Week." Has the data from the BLS (Bureau of Labor Statistics), to be released on Friday, ever mattered less relative to the news cycle? Hard to say. Of course, this data will still matter to the policy makers at the FOMC. As of Friday's close, futures markets trading in Chicago were pricing in a 21% probability of a 25 basis point reduction being made to the Fed Funds Rate as soon as March 18th, and an actual likelihood of such a policy shift by June.

Politically speaking, the Iowa Caucus kicks off this (Monday) evening as the race for the Democratic nomination for president for this election year gets under way in earnest. This news event, which can certainly impact markets, will be followed on Tuesday by President Trump's delivery of his annual State of the Union address, and then on Wednesday, by the Senate's vote on whether to convict or acquit the very same president in conclusion to the recent impeachment proceedings.

Trading Around The Carnage

As zero-dark thirty fades into early Monday morning, equity index futures continues to hold gains, as they have overnight, though well off of the highs. My thoughts on the virus is that we still just do not know. Is recent U.S. equity behavior the start of a more serious correction? Or is this the pause that refreshes? Obviously, a lot depends on how quickly the coronavirus is contained, and how deeply this upends the world order? Could this have a greater impact on trade than the actual trade war? Has the fabric of cross-border trade been torn in some way that can not be soon remedied? Can China even live up the Phase One trade agreement if they want to?

Markets were surely already extended. Many traders find themselves in a "no man's land" where their longs are now off of their highs, but at the same time, still trading so far above net basis as to slow the trigger finger in adding to those positions. The result could be an impulse to raise cash, in other words... to protect profits. Let's talk about trading.

Apple (AAPL) ... Readers know my strategy here. An obvious coronavirus name, I took leave of the name just above $325 post-earnings. Started the process of reentering the name on Friday afternoon. My plan had been to try to end up with an average price below $310, and complete a little "extraction of capital" operation. My thoughts at this time are that perhaps I can get more aggressive, and shoot for a lower net basis.

Disney (DIS) ... Another coronavirus name, would love to grab a few shares close to $135 ahead of Tuesday afternoon's earnings report should that opportunity show it's face.

BP PLC (BP) ... Reports Tuesday morning. PMs hate the group. That's not going to change. Does OPEC take action this week? If not the shares still pay a yield of 6.8%. Probably going to add a short term long to my long-term core position (which has long been part of my dividend book). Yeah, big oil is a lousy investment. There may be a trade here.

Sure, Amazon (AMZN) , Microsoft (MSFT) , and ServiceNow (NOW) all wowed us all with spectacular corporate execution. Is there more on the way where that came from? Some tech/software type names have moved sideways, or just plain suffered as the move has been out of risk in spots. Oh, and not only do these names help folks work from anywhere, they don't have much Chinese exposure.

Salesforce (CRM) ... Reports in late February. Has moved sideways in a tight range for about a month. Ready to pop? One way for the other. Definitely looking to get back into this one on weakness.

Splunk (SPLK) ... Long-time Sarge "big data" fave, will also report in late February. SPLK is currently setting up a test of the 50 day SMA. Give me a chance to add below $150, and if the planet isn't on fire at the time, I'm interested.

Would I like to add to Microsoft, or get long either Amazon, or ServiceNow? Of course, on that note, I have to see an attempt made by either AMZN or NOW to fill the recent gap, to at least fill a decent portion of those gaps to get fired up. As for MSFT, I traded out of one third of my long above $172, and would like to add those back on below $169.

Get an email alert each time I write an article for Real Money. Click the "+Follow" next to my byline to this article.
TAGS: Earnings | Investing | Markets | Stocks | Technical Analysis | Trading | China