Just what are you and I supposed to think? Domestic equity markets were decisively lower, with the Nasdaq Composite down nearly a full percent for more than half of the day's regular trading session. Traders smelt fear, or at least thought they smelt fear, as the the spread between yields paid by U.S. 3 month paper and U.S. 10 year paper did actually invert prior to showing some elasticity. Just a heads up, I am something of a purist. I have never liked the designated hitter rule, and I don't really count inversions if they do not hold through the New York closes.

Yes, the American League still uses the DH, heck the National League even speaks such blasphemy, the 3mo /10yr? That spread expanded overnight. Understand though that it will not take a lot of negative news or even thoughts to move that spread toward either side of a true flat reading. The yield on the U.S. 6 month T-Bill is inverted early this morning right through the seven year note. The nadir of the curve now rests between the U.S. 3 and 5 year notes. Why is the nadir important? These markets do move in real-time, so this is just a snapshot in my opinion, and not truly useful for economic modeling when credit spreads are impacted by uncertainty which in turn is responsive to news items of unknown duration. That understood, this snapshot's implication would be that credit spreads would be unable to make a proper attempt to normalize for at least three years. Hey, don't yell at me, I'm just a hockey player form Queens.

Ever get caught in a riptide? Great exercise. Don't recommend it though. Scary, until one realizes what is going on. Still, the ache in the arms, the waves that seem unexpectedly rough... only because the arms are so darned tired. The first time is the worst time. After that, one who really enjoys local waters, is always half at the ready for something out of the blue.

On Thursday, the tide did seem to suddenly change. So soothing, I guess that the patient who passed on the coronavirus to her spouse in Chicago was symptomatic. So soothing I guess that neither travel nor trade will be restricted, even as corporate America responds in this way. Breadth at both of New York's exchanges swung from notably awful to rather neutral just in the 45 minutes or so prior to the closing bell. In an odd twist, at the NYSE, winners beat losers, while declining volume edged advancing volume, but up at the Nasdaq Market Site, the opposite was true... losers beat winners as advancing volume beat declining volume.

As expressed above, the S&P 500 rejected the pressure one might have looked for from the yield curve. The correlation that has jelled so well over the past year, was not there.

There are times when this correlation has been tight, and others when it has been more loose. That said, the 3mo/10yr yield spread and the S&P 500 have almost always moved in the same direction. This week, it appears that as one has zigged, the other has zagged. Do they reconnect? I am not smart enough to tell you that.

I am smart enough to tell you that the bond market is more afraid of the dangerous coronavirus spreading globally than are equity markets. Does global pressure on the longer end of the U.S. curve for this reason even send a lasting economic message? Hard to say. I do have an idea.

What do you think happens to the global economy should China post let's say 4% growth (officially, actual growth we'll likely never know) for the first quarter? Even if China should recover completely and do it quickly, what does that do to full year GDP? Best case... 5% to 5.5%, I think. Then, the extrapolated impact on the Asia-Pacific region, and then Europe, the U.S., Africa, even Latin America. Remember that the IMF just upped their projection for Chinese GDP to 6% growth for 2020 from 5.8% in the wake of the Phase One trade agreement between Presidents Trump and Xi. Now, if 6.0% growth becomes 5% to 5.5% at best, that clearly makes the IMF's global GDP projection of 3.3% unrealistically optimistic. Demand for energy, demand for industrial commodities, even demand for certain areas of tech such as hardware and semiconductors will decline. Buying these dips needs to be incremental in my opinion.

Is it up to India to now carry the football if planet earth needs a new driver for growth? Those estimates have been going the wrong way on their own, prior to a potentially global health emergency. What if India gets sick? Economies do not evolve overnight. There must first be a human perception of broad scarcity (or surplus) created through either authentic (famine, disease) or artificial (policy) means that forces human response somewhere else.

The least visible evidence will be in generally upward trending volatility for cryptocurrencies such as Bitcoin in dollar terms as China's yuan prompts what looks like capital flight when trading at the lows. Cryptocurrencies do offer public value in their ability to move stored wealth across national borders in times of crisis.

Amazon (AMZN)  ... Holy Moly. Congrats to the crowd that went into these earnings long the shares. That was gutsy, and you were rewarded for it. I did turn what would normally be considered an out-sized profit on an after-hours short position, but you guys beat the heck out of me, and for that, I salute you. I'll take a look at this one later for Real Money.

International Business Machines (IBM) ... So, Ginni Rometty steps aside as CEO, allowing two cloud/software focused business leaders to assume the roles of CEO, and President as of April 6th? Does this mean that IBM can now take that next step, compete with the likes of Amazon, Microsoft (MSFT) , and Alphabet (GOOGL) for the revenue and margin created by the business cloud? Or, will IBM remain stuck in the Oracle (ORCL) zone? I'll tell you what. This means that IBM has a chance. Buy on this pop? No. On the next day that passive investors knock the stuffing out of tech broadly, but not out of IBM for a specific story? Good chance.

Apple (AAPL) ... Still have been able to get my price. Still flat. The shares did find support at $319 on Thursday, if that level remains untested in early morning weakness, I may venture back in small. Remember, my Mason-Dixon line stands juts above the $325 level. At $327, I'll chase. I'm not willing to lose more than $2 on this little adventure.

Macy's (M) ... Bear in mind, the investor day at the NYSE is next Wednesday. I am staying long what I have left in inventory through that date. Already took profits on half of this one as the outbreak first made news.

ViacomCBS (VIAC) ... Added more on weakness Thursday. Yeah, this one has not been good, and really does require active management of net basis. My thought was that the Bolton book, being published by Simon & Schuster (which is a VIAC subsidiary) might lose potential sales as content is possibly redacted. My reaction was that the market reaction was overblown. Time will tell. My position in this name is complex, but at the overnight last sale of $34.16, I am only down pennies. 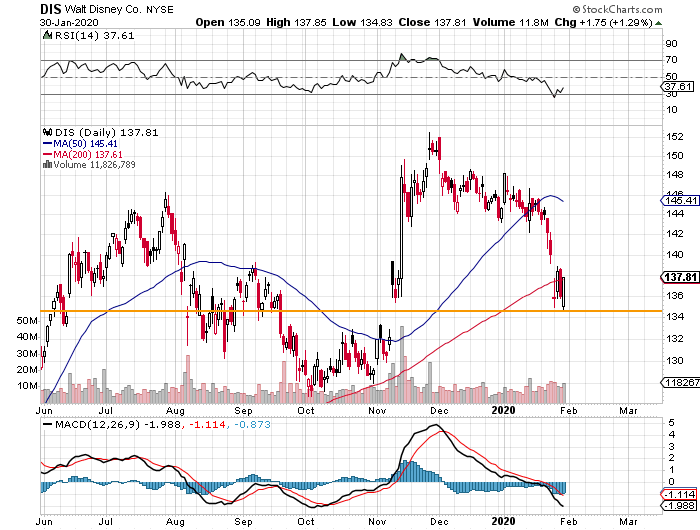 What I see is a November gap higher that still has not completely filled, and the downward gap created last week by this virus really hasn't closed. I'll tell you what, if I do buy these shares ahead of earnings, I will also write calls against the position in order to get net basis down into the $134 range. Right now, I see the equity trading at $137.60. February 21 $139 DIS calls closed at $3.30 on Thursday. Those prices would put net basis at $134.30. Even if called away, that would be 3.5% in profit for three weeks' work. Just an idea.

Get an email alert each time I write an article for Real Money. Click the "+Follow" next to my byline to this article.
TAGS: Earnings | Investing | Markets | Stocks | Technical Analysis | Trading | Cryptocurrency