Say, we can go where we want to
A place where they will never find
And we can act like we come
From out of this world
Leave the real one far behind
- Ivan Doroschuk (Men Without Hats), 1982

If Hades has truly emptied and all the devils are here in the form of economic and margin contraction, volatile bond yields, wars between neighbors in unlikely places and a pandemic that never truly just goes away, what do investors do? Where do they hide?
We have gone into the energy sector with much success... until that trade stopped winning. We have gone into the defense contractors. That trade is still winning. Still, it would be a better world if there was no demand for what these companies do well.
Gather round, my young padawans, and I'll tell you a tale. I will tell you the tale of three stocks that have done me right of late, and appear poised to keep doing so. In disclosure, I am long all three.
Now, let us begin.
Last week, the Consumer Staples SPDR ETF ( XLP) gained 0.51%, good enough for third place of the 11 such ETFs in what was a bloody week for equities. The sector is down 3.9% year to date, which is also good enough for third place of 11. Places number one and two for CY 2022, so far, go to Energy ( XLE) for obvious reasons and to Utilities ( XLU) , but that sector, though defensive in nature, now finds it's nice dividend yields in competition with U.S. Treasuries competing for the same investors.
There are many Staples to choose from. I happen to be in the three profiles below. You are certainly not wrong if you are wearing a Coke ( KO) and a Smile or the face of a kid eating a Hershey ( HSY) bar. Those two are up year to date.
My three are down year to date, but showing recent signs of playing catch-up and finding opportunity is kind of what we do for a living. 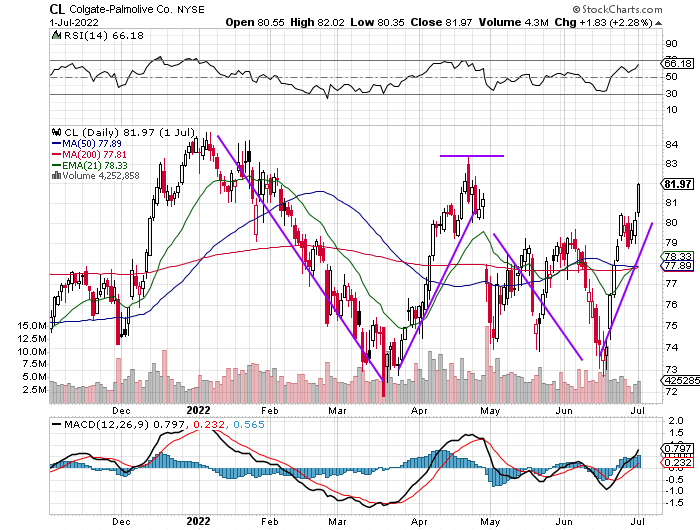 Readers will see that Colgate-Palmolive ( CL) has formed a (rather sloppy) double-bottom reversal this year with an $83 pivot. Relative Strength is strong, but not overbought. The daily Moving Average Convergence Divergence (MACD) is in good shape now that the 26-day exponential moving average (EMA) has joined both the 12-day and 9-day EMAs in positive territory.
The stock trades at 26 times forward-looking earnings estimates, which is expensive relative to the S&P 500, but not other relative to Staples also showing song signs of institutional accumulation. CL pays shareholders $1.88 per share per year in dividends, currently yielding 2.29%.
Colgate ended last quarter with a current ratio of 1.1, which while not fantastic, is acceptable. CL has generated at least $3 per share in free cash flow for five consecutive quarters. The company reports on July 29.
Target Price: $99 (20% run from pivot)
Pivot: $83
Panic: $76 (break of both 200-day and 50-day simple moving averages (SMAs). 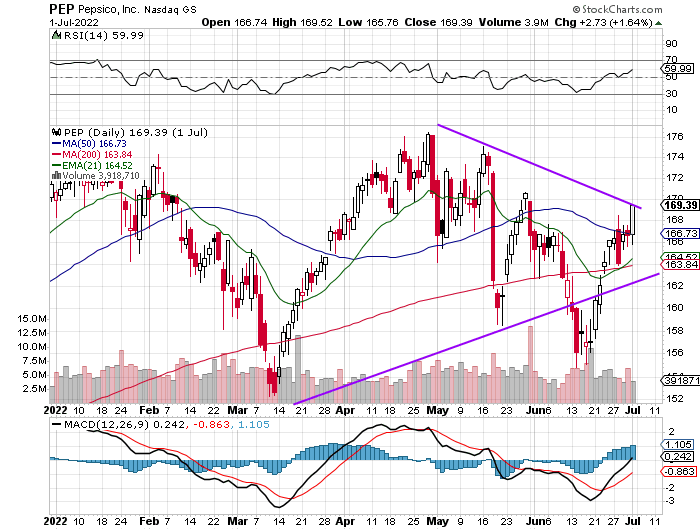 Since mid-March, PepsiCo ( PEP) has put in a series of lower highs coupled with a series of lower highs. As we know, closing pennants or flags often end in an explosive move one way or the other.
Does the move have to go my way here? Not necessarily. However, since mid-June, the stock has retaken its 21-day EMA, 50-day SMA and 200-day SMA. Portfolio (and risk) managers watch those moving averages. The daily MACD and Relative Strength are both strong without being too strong.
PEP trades at 25 times forward-looking earnings estimates while doling out $4.60 per share annually for a yield of 2.72%.
I don't love the balance sheet. The current ratio stands at just 0.87, but this metric is improving as the company has made an effort to strengthen the balance sheet. Three months ago, that current ratio stood at 0.83. PEP reports earnings next Tuesday.
Target Price: $195 (my model actually says $205, I just thought that was greedy.)
Pivot 1 : $169 (upper trendline)
Pivot 2: $177 (former resistance)
Panic: $163 (break of 21 day EMA) 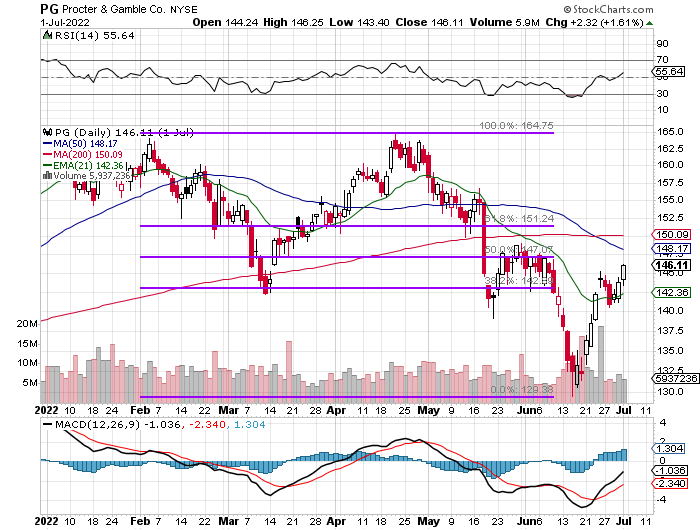 Procter & Gamble ( PG) , as readers can see, had been beaten severely from late April into mid-June, and then the sun started to shine. This one is in the earliest stages of development of the three we discuss here today.
Relative Strength is starting to get somewhere significant. The daily MACD is a bit tricky. We do have a bullish-looking crossover of the 26-day EMA by the 12-day EMA. However, both, unlike the 9-day EMA, still reside in negative territory.
The stock also still needs to take both its 50-day and 200-day SMAs. While both could present as resistance, both could also provide a catapult-like effect should price discovery drag a number of portfolio managers over the hill and into the land of increased exposure.
PG trades at 25 times forward-looking earnings and pays a yearly dividend of $3.65 per share for a yield of 2.50%.
This is another balance sheet that I don't love. Current ratio of just 0.68. That's really awful, yet the company has posted monster free cash flow of at least $5.76 per share for three straight quarters and we're looking for places to hide for now, not someone to raise a family with.
Target Price: $165 (former resistance)
Pivot: $148 (50 day SMA)
Panic: $140 (break of 21 day EMA)
(XLE and PEP are holdings in the Action Alerts PLUS member club . Want to be alerted before AAP buys or sells these stocks? Learn more now. )
Get an email alert each time I write an article for Real Money. Click the "+Follow" next to my byline to this article.
TAGS: Dividends | Economy | Investing | Stocks | Technical Analysis | Value Investing | Consumer Staples | U.S. Equity

Bearish Bets: 3 Stocks You Definitely Should Consider Shorting This Week

Whirlpool Continues to Spin to the Downside

The shares have yet to hit bottom after an earnings miss.

PepsiCo Pops on Solid Earnings, but Will the Fizz Last?

The beverage and snack food giant is seeing shares get a boost from its results and outlook, but the bigger technical picture isn't encouraging.

The Fed has spoken, and we know a rough ride likely awaits as the inflation battle rages on. So, here we'll compare the First Trust Consumer Staples AlphaDEX and the Consumer Staples Select Sector SPDR funds.