In one of his "Executive Decision" segments of Mad Money Wednesday night, Jim Cramer sat down with Charlie Morrison, chairman and CEO of Wingstop Inc. (WING) . Wingstop is a restaurant chain that just posted a top- and bottom-line beat with a 6.3% increase in same-store sales. Morrison said WING has seen positive same-store sales for 14 years in a row and is heading toward completing its 15th year.

The company has also consistently delivered between 10% to 12% store count growth annually. About 25% of sales are now digital, and WING is rolling out delivery in select markets while also expanding internationally.

This all sounds like great fundamentals but let's take a minute to check out the charts and indicators.

In the daily bar chart of WING, below, we can see that prices doubled in the past 12 months -- not bad for white meat. Prices took off to the upside in August with a gap but like many stocks, October saw a retreat. WING is trading below the rising 50-day moving average line but still above the bullish 200-day average.

The daily On-Balance-Volume (OBV) line shows a consistent rise until October, which suggests a shift from aggressive buyer to aggressive seller.

The trend-following Moving Average Convergence Divergence (MACD) oscillator shows a bearish crossover in early September and another one in October. This indicator is now close to crossing the zero line for an outright sell signal.

In this weekly bar chart of WING, below, we have a mixed picture. Prices are above the rising 40-week moving average line but the weekly OBV line has turned lower and the weekly MACD oscillator has given a take profits sell signal.

In this Point and Figure chart of WING, below, we can see a potential downside price target of $56.61. 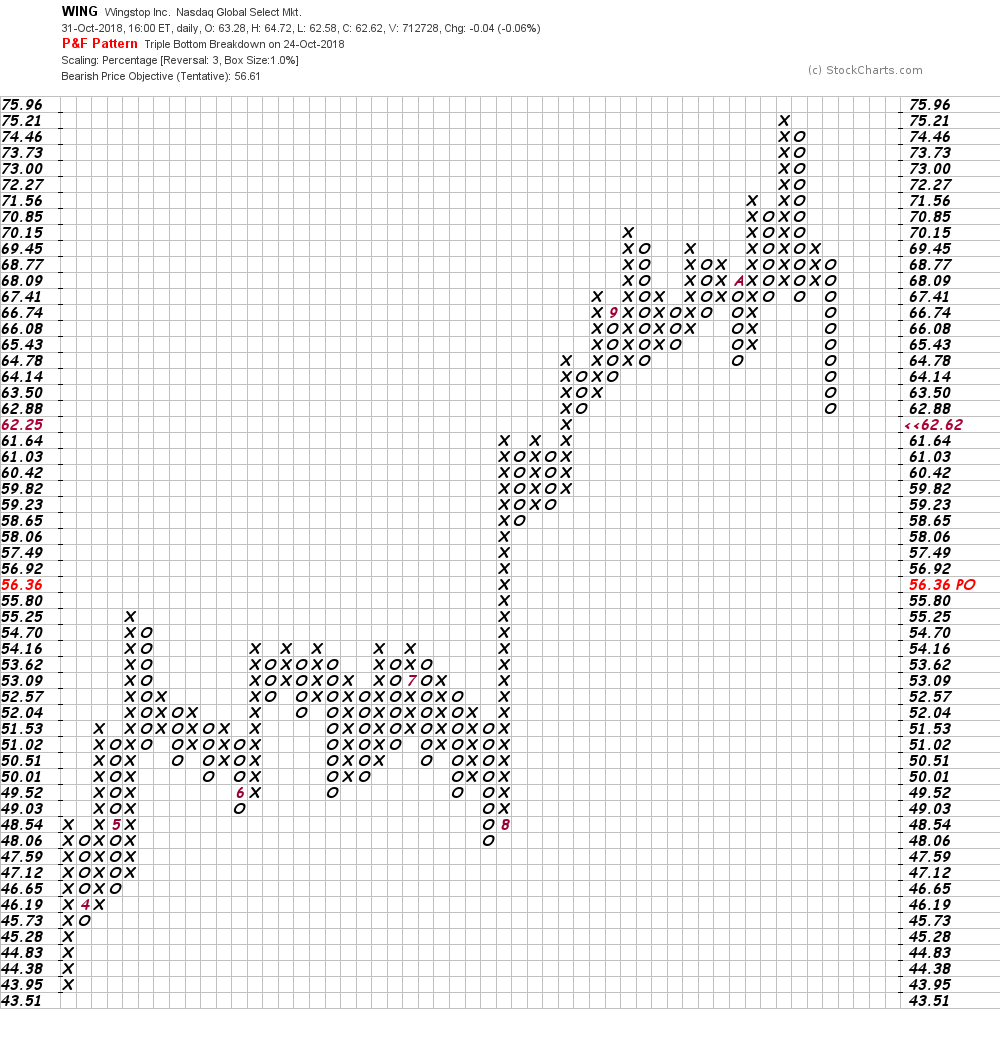 Bottom-line strategy: The daily bar chart shows a band of prior resistance around $55-$50 and we could see WING pull back to retest that area. Hopefully it reverses roles and we see $55-$50 act as support.

Get an email alert each time I write an article for Real Money. Click the "+Follow" next to my byline to this article.
TAGS: Investing | Consumer Discretionary