Beer in the Summer

Before we even begin, I must confess, that I have a few favored beers in my "portfolio" of choices. I'm not talking about stocks here, I'm talking about brand names. When I've got my Irish up, or when the NY 69th Infantry (God bless them) passes in review, it's got to be Guinness Stout. Well, maybe Smithwick's Red Ale, but will go with the stout. Both are Diageo (DGEAF) brands. If it's been a hard day's labor, and I am forced to participate in after hours' activities, then it's just plain Bud Light. A lot of folks don't like Bud Light. I think they underrate the nine-time (?) Bud Bowl Champion. That brand by the way, is part of the Anheuser-Busch InBev (BUD) family. That firm made their own news today, as they prep for a Hong Kong based IPO for the Asian subsidiary. Hockey? Labatt's Blue, part of that same family. Fourth of July? Samuel Adams Boston Lager, flagship brand of the Boston Beer Company (SAM) .

All those beers are nice, but when it's sun, sand, waves, Van Halen blasting somewhere in the background time, it's time for Modelo Especial... and maybe some grub not necessarily designed to prolong my lifespan.

Most of you already, if you invest, or if you simply enjoy a good beer, know that Modelo Especial is not a leading component of the Constellation Brands (STZ) portfolio of offerings, this brand is the leader of the entire U.S. beer industry in terms of depletion growth at an incredible 17%. Constellation reported the firm's fiscal first quarter last week. Solid beats for both EPS and revenue on revenue growth of 2.4% y/y. Some of you may recall a piece that I wrote for you in late May in reference to Constellation at the time that tariffs were being threatened on Mexican imports. Seems like ancient history now. Long story short, the shares were trading at $176, and I told you that I was taking a pass on the shares, even on a steep discount. The shares bottomed that day above $171. I was right for a couple of hours. Should have bought the darned shares.

Back to the quarter reported. Operating Cash Flow exploded 18% to the upside year over year to $593 million. Beer shipments grew 5.4%, providing sales of $1.48 billion. Wine and Spirits sales were $620 million on a shipments decline of -8.1%. This was somewhat by design: Remember the firm did sell lower end collection of wine brands to E&J Gallo for $1.7 billion. What the firm refers to as the Power Brands delivered depletion growth of 4%. By the way, the beer segment experienced an aggregate depletion growth of 7% including the out-performance of the top Modelo offering.

The big negative for this name has unfortunately been the drag created by the firm's large investment in Canopy Growth (CGC) . Don't forget that Canopy missed badly this quarter, and posted a much more significant loss per share than had been expected. Constellation, unfortunately has taken a sizable equity stake (38%) in Canopy and must share in those losses. It is said that one day cannabis will be federally legalized in the U.S. I see no reason whatsoever for that not to at least be the case for medical use. Until that day, and the day where cannabis infused beverages become available in the U.S. market. Then this investment likely remains an inconsistent performer.

Constellation did guide Fiscal 2020 higher in terms of earnings. The company now expects to see EPS for the year in a range that spans from $8.65 to $8.95. That's an increase of 30 cents on both ends, and now places the low end above what was consensus view of $8.57. Unfortunately, straight from the firm's own documents, this is ex-Canopy Growth. Including the negative impact of CGC on FY 2020 STZ earnings, the firm's range for guidance plunges to $4.95 to $5.25.

Industry analysts generally are impressed by the numbers posted by Constellation as well as the guidance. In the wake of last week's release, Jefferies has maintained a "Buy" rating. BMO Capital Markets has expressed "more confidence" in their bull thesis. Citi, HSBC, and Suntrust have all increased price targets over the past 12 hours or so, aiming at $210, $220, $190 respectively. 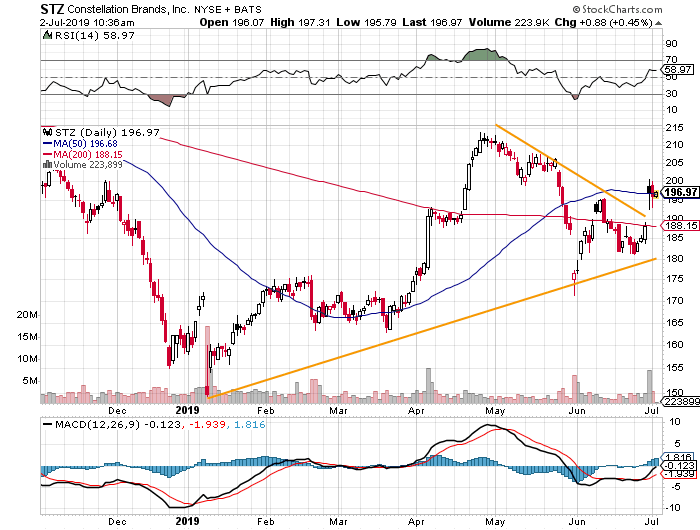 The shares do seem to be making higher lows, and until this breakout lower highs. That is indeed what has led to this move higher, from a technical perspective. The battle now becomes one between taking and holding the 50 day line, or falling back to fill the gap. As you can tell, I like the beer a lot more than I like the stock. Caution though, I was wrong about this stock last time that I publicly opined.

I would feel better if I were to buy the shares close to the last sale of $197, if I also sold covered calls against the position. Say October $215 calls that might be sold for $5.35, knocking net basis into the low $190's. Then an adventurous trader might also consider selling $180 October puts for $4.40 or so. Now, that trader will have sliced nearly 10 bucks off of net basis. That's a ball game. Of course there is increased exposure to equity risk should the shares see the dark side of $180 by expiration.

Myself? I'm only considering selling the puts. The dividend is not that attractive.

Get an email alert each time I write an article for Real Money. Click the "+Follow" next to my byline to this article.
TAGS: Dividends | Investing | Options | Stocks | Technical Analysis | Trading | Food & Drink | Consumer Discretionary | Stock of the Day