Hello old friend. Conagra Brands (CAG) had been a mainstay in several of my pandemic portfolios. Turns out that maybe another period of perceived value could be in the offing for the packaged food staple that pays a nice dividend.

For the three month period ended August 28th, Conagra Brands posted adjusted EPS of $0.57 (GAAP EPS: $-0.16) on revenue of $2.9B. Conagra beat Wall Street on both the top and bottom lines, while net sales increased 9.5%, or 9.7% organically. This sales growth, as pedestrian as it may seem (this is an old-fashioned staple) ended up being the fourth consecutive quarter of accelerating year over year growth.

The firm states that for the quarter... operating margin, net income and diluted EPS were all impacted by non-cash goodwill and intangible asset impairment charges primarily driven by an increased discount rate. Um, yeah. At least sales are growing, We have that. By the way, sales did suffer a 0.2% negative impact from exchange rates. Adjusted operating margin landed at 13.7%. GAAP operating margin printed at -0.7%.

Price/mix increased 16.6% on volume that decreased 6.1%. The firm gained share in meat snacks and microwave popcorn. Adjusted operating profit for the segment increased 15.4% to $254M.

Conagra reaffirmed guidance already provided during the fiscal fourth quarter earnings call. For the current quarter, Conagra has planned for continued supply chain inefficiency. Gross inflation is expected to continue, but moderate through the remainder of Conagra's fiscal year. Conagra's fiscal full year 2023 guidance was and is....

- adjusted operating margin is expected to be a rough 15%.

Conagra Brands ended the quarter with a net cash position of $67.4M, which is down from three months ago, and inventories of $2.229B. That's up from three months prior. Current assets amount to $3.234B. Current liabilities add up to $4.16B, including $1.205B in current installments of long-term debt. This puts the firm's current ratio at 0.78. That's not nearly as healthy as I would like. It's also down from a still not very acceptable 0.86 three months back. Sans inventories, which is questionable to even do in a necessarily inventory heavy business such as this... and the quick ratio would be 0.24.

I can't lie. This is one tough balance sheet to look at.

Ok. You know I don't like the balance sheet. You probably already figured out that I'm not that crazy about making adjustments for large non-cash goodwill and intangible asset impairment charges. That said, there are positives. Management has appeared to handle inflation somewhat well as sales grew significantly across the entire firm even as volumes decreased across the entire firm.

The stock trades at just 14 times forward looking earnings, which is a low multiple relative to the S&P 500 (about 16 times) and really low relative to the Consumer Staples sector (average of about 19 times). The below average valuation is probably warranted given the fundamental backdrop. Is it cheap? Probably not.

At least free cash flow turned positive this past quarter, printing at $138.3M, up from $-15.1M for the year ago comp, largely on an 88% boost to cash flows from operating activities. That does help sustain the dividend, which at $1.32 for a yield of 3.91%, is attractive. 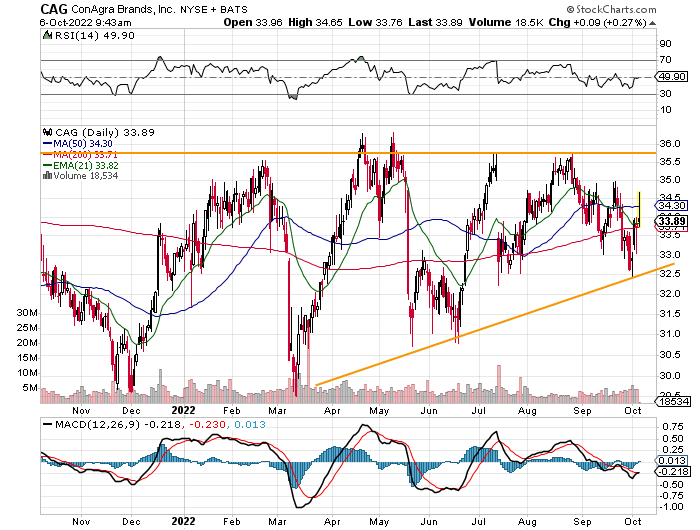 My belief, if one is attracted to taking on this name in order to land that dividend, is that CAG tends to trade in a range, even if the lows are moving higher and that one can pick their price. Given the lack of overall volatility, and the regularity with which the stock tends to trade both above and below all three of its key moving averages (21 day EMA, 50 day SMA, 200 day SMA) that one could probably initiate when CAG is trading below all three of those lines.

For traders who are not investors and not tempted to hold on in order to get paid, I think that this name can be both bought below and sold above those lines, probably a few times a year, potentially generating more income than that dividend might have.

Get an email alert each time I write an article for Real Money. Click the "+Follow" next to my byline to this article.
TAGS: Earnings | Economy | Investing | Stocks | Technical Analysis | Trading | Food & Staples Retail