Comcast Corp. (CMCSA) reported better Q4 numbers with high-speed internet strength and a weak quarter for theatrical releases. CMCSA is the 'Stock of the Day' at Real Money Thursday, so let's review the charts and indicators of this media company.

In this weekly bar chart of CMCSA, below, we can see the price action over the past four years. Prices are higher than they were four years ago but what I find interesting is how the highs of 2017 in the $42 area have been acting as support in the past year. This is a good example of how resistance can reverse roles and become support. Prices are lower this morning but still above the rising 40-week moving average line.
The weekly OBV line was strong from the middle of 2018 but leveled off in recent months.
The MACD oscillator was in a take profits sell mode for much of 2019 but recently crossed to the upside for a new outright go long signal.

In this daily Point and Figure chart of CMCSA, below, we can see the recent upside breakout at $47.12 and a potential upside price target in the $59 area. 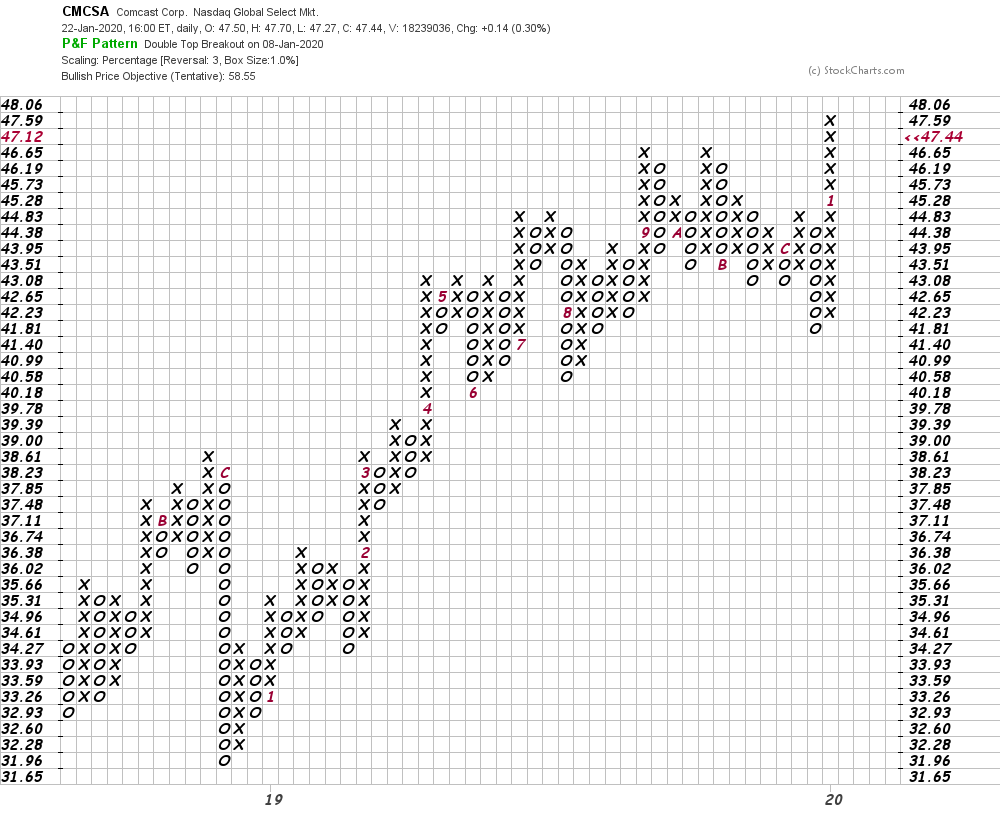 Bottom line strategy: The price of CMCSA could suffer a little in the short-run with spillover selling from the broad market but I would look for renewed strength in the weeks ahead. Traders could use short-term price weakness under $46 to go long. Risk a close below $44 and look for strength to around $60 in the latter part of the first quarter or early second quarter.

Get an email alert each time I write an article for Real Money. Click the "+Follow" next to my byline to this article.
TAGS: Earnings | Investing | Stocks | Technical Analysis | Trading | Media | Telecommunications | Television Production/Distribution | Telecom Services | Stock of the Day