By TIMOTHY COLLINS Jan 14, 2019 | 01:53 PM EST
Stocks quotes in this article: C
Making sense of banks earnings is kinda like solving a Rubik's Cube while blindfolded and underwater... without oxygen. Which is to say, there are folks out there who can do it, but they are few and far between. I tend to avoid trading bank names into earnings. The movements are small, so upside is often limited. The occasional outlier move makes selling volatility challenging because again, the movements tend to be smaller, so premium to be gained from selling premium is small.
The after-earnings moves are more appealing for me. Let's take this morning's stock of the day, Citigroup ( C) , for example. The company reported a beat on the bottom line, but top line revenue came in just shy of expectations. Still, shares are trading higher on Monday and are up over 4% as of 1:45 p.m. ET.
I expect we'll see analysts report on the stock pre-market tomorrow. Instant reaction on bank earnings often come with instant regret. (See: Rubik's Cube above). Don't be surprised if we see a mixed response. Despite the action today, there may be some history working against the Citi bulls over the next three weeks. Over the past FOUR years, the stock has reversed the open/first-day move every single report. In fact, if you faded the first day open and close and held the trade for 21 calendar days, you would have made a profit seventeen times in a row.
I understand trends will eventually come to an end, but I still follow the mantra the trend is your friend, trade it until the end. While the daily chart appears much stronger for Citi, the stock is heading into both gap resistance as well as the 50-day simple moving average (SMA). We have to go back to early October to find the last time Citi traded above its 50-day SMA. Add in the short-term overbought nature of shares given the recent 20% move higher over the past three weeks. Yes, shares were oversold three weeks ago, but now we're overbought. 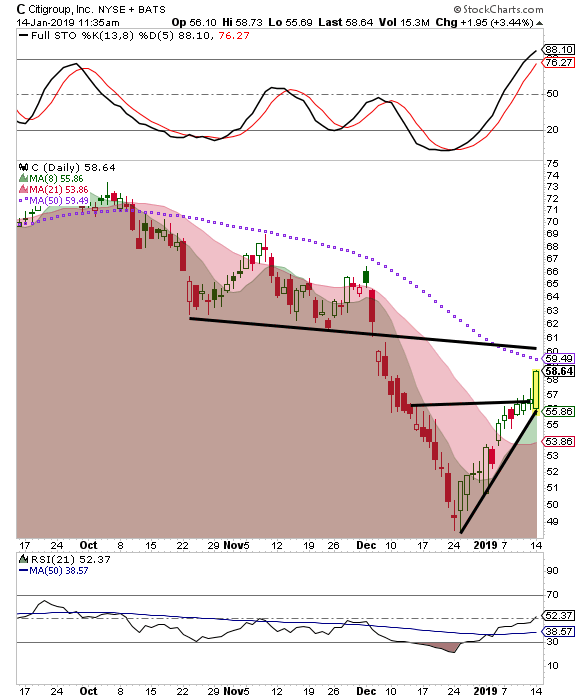 Based on history, I would target a reversal of 4-6% from today's close. That only puts us back to last week's levels. That's my target. So, I'd hold off chasing today and wait until we consolidate.
Get an email alert each time I write an article for Real Money. Click the "+Follow" next to my byline to this article.
TAGS: Investing | Stock of the Day