Like with nearly every bank that has gone to the tape since last week, with the exception of JP Morgan (JPM) , there is some good here and some bad. Most investors had felt that JPM was best in class among U.S. banks and that is bearing out in real time as we hack our way into the very early innings of earnings season. One name that I have held in the past, and have dabbled in from time to time, has been Citigroup (C) . An argument can clearly be made in support of the stock just in terms of valuation. In addition, the chart, as you will see below, does set up nicely. The problems are several, but in actuality, there are a couple that really merit some attention. First off, Citigroup comes with a higher level of international exposure than other banks. The U.S. is a better environment in terms of interest rates, and economic growth for a bank to commence with traditional business lines than say Europe might be. Secondly, somehow these guys managed to screw up the quarter's trading, equities in particular, in a quarter when everybody with a retail trading account turned in stellar performance.

The firm posted Q1 EPS of $1.87, a beat, on revenue of $18.58 billion. That number would be considered a slight miss by the industry, while contracting by -1.5% year over year. Now, I must ask a question. Given that the firm returned more than $1 billion to shareholders in the form of dividend payments this quarter, given that the firm bought back 66 million shares for more than $4 billion, given that the firm successfully cut expenses by some 3% from the same quarter last year, how has the stock really only traded sideways since late January, even if it did come into these numbers precisely at the top of that range, and threatening to enters a "buy zone"?

Oh, And What The?

Incredibly, as professional trading firms have become increasingly more reliant upon technology and algorithms, Citigroup posted revenue from equity trading that printed in a decline of 24%. All of the banks posted peer performance trading a market that for the most part handed participants back the money lost in December. I don't know, maybe try hiring some human traders? They would be hard pressed to turn in a quarter this bad, no matter what they did.

I know. I like to pick on poor performance in the equity trading department, especially when I suspect that electronic trading played a role.The truth is that investment banking is performing well, and consumer banking improved modestly. What is working for Citigroup? Besides the just mentioned investment bankers, and the return of capital to shareholders? It's cheap. The shares trade at a forward looking PE ratio of only 7 times, a PEG ratio so small (0.5) that you need a telescope to see it, and a tangible book value per share of only $65.55. Last glance, the shares are trading at $66.56. Nearly one to one. JPM trades at more than 1.9 times book in comparison. Goldman Sachs (GS) ? You better sit down. 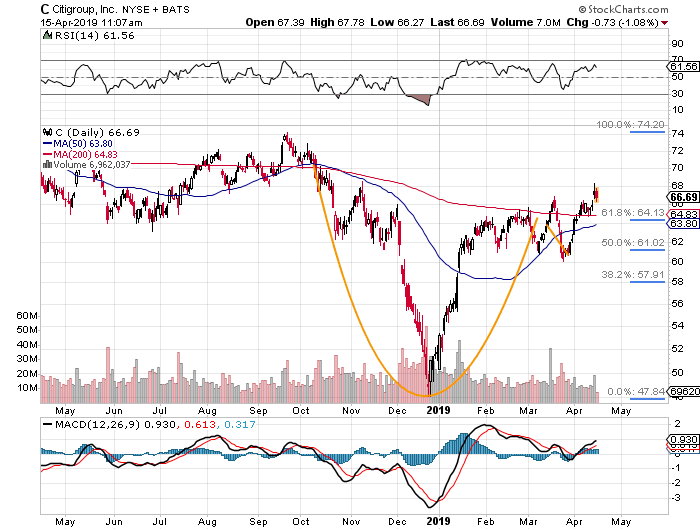 Plain to see that the name came into earnings on the cusp of a potential breakout in response to that sloppy cup and handle that I drew for you in orange. I will tell you what. This name is like a coiled spring. Should the global economic picture improve this stock will pop more than most. These are my thoughts on the name. If you disagree, that's fine. This is opinion.

2) I need to see a break above $68, and support there, to rekindle my interest in establishing an entry into the name.

Get an email alert each time I write an article for Real Money. Click the "+Follow" next to my byline to this article.
TAGS: Earnings | Investing | Markets | Options | Stocks | Technical Analysis | Trading | Banking | Stock of the Day