Jim Cramer was positive on Cisco Systems (CSCO) during his Mad Money program Tuesday night. CSCO is pushing hard into 5G with new products and services, and Cramer said there's still lots of room for this stock to run higher. Let's visit with the charts and indicators.

In this daily bar chart of CSCO, below, we can see that prices broke out to new highs this month. CSCO is above the rising 50-day moving average line and a bullish 200-day line.

The volume of trading expanded when prices broke out above $48 and the daily On-Balance-Volume (OBV) line has been rising since late December. The OBV line has just moved above its September/October highs to confirm the price breakout to new highs.

The 12-day price momentum study in the lower panel shows equal highs in February when prices have made higher highs. This difference is a bearish divergence. This divergence is not big as it has only covered the past couple of weeks but it is something to keep an eye on going forward.

In this weekly bar chart of CSCO, below, we can see how the price of CSCO has nearly doubled in the past three years. Prices are above the rising 40-week moving average line.

The weekly OBV line shows a positive trend and it is close to making a new high for the move up.

In the lower panel is the slow stochastic indicator. This is an overbought/oversold indicator and right now it is very overbought. Can prices ignore this overbought condition? Yes, but we should monitor it.

In this Point and Figure chart of CSCO, below, we can see the breakout at $49.03 and an upside price target of $57. 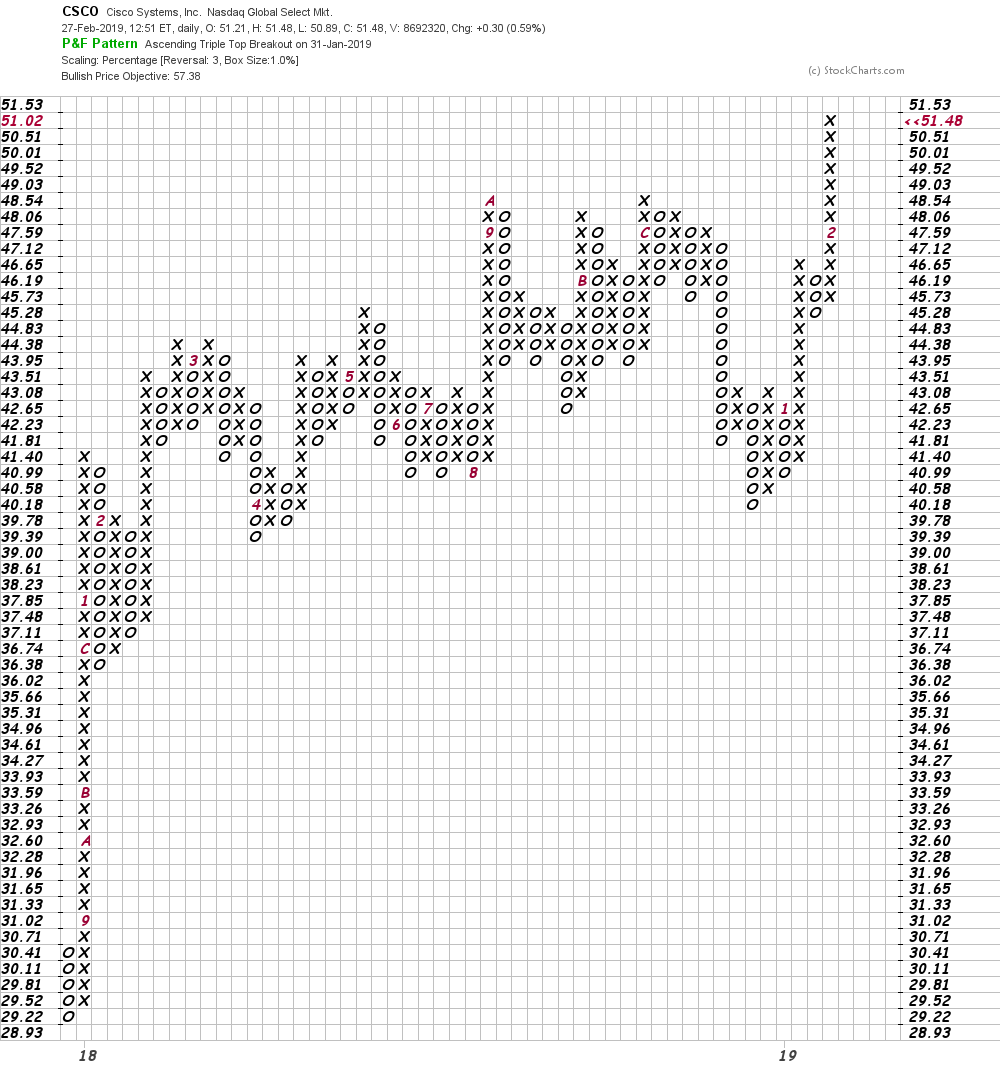 In this weekly candlestick chart of CSCO, below, we can see a pattern from late December. This pattern is called "eight to ten record highs".

What is it? A market goes up eight days or eight weeks or eight months with new highs being made with bullish (white) candles. The market could go up nine weeks or even 10 weeks but in the ninth week or the tenth week or the eleventh week we are on alert for a reversal candle or a top.

Maybe CSCO will reach our Point and Figure target in that time frame.

Bottom line strategy: CSCO has indeed rallied smartly since late December and it's strength stands out because it has broken out to new highs. I am not a bear but traders and investors should risk a close below $48.50 now and you could take some profits on approach to $57 in the weeks ahead.

Get an email alert each time I write an article for Real Money. Click the "+Follow" next to my byline to this article.
TAGS: Investing | Stocks | Technical Analysis | Trading | Technology | Technology Hardware & Equipment