The numbers hit the tape shortly after the closing bell on Wednesday afternoon. Cisco Systems (CSCO) had released the firm's financial performance for it's fiscal third quarter. On an adjusted basis, EPS printed at $0.79. That was year over year growth of one penny. An earnings contraction had been expected. Revenue unfortunately did contract 7.6% to end the quarter at $11.98 billion. That did, however... beat Wall Street consensus.

The firm openly acknowledges the impacts upon quarterly performance forced by the Covid-19 pandemic. There were negative impacts on the ability to manufacture the firm's legacy offerings due to constraints placed upon the availability of certain components at times. On Wednesday evening, CEO Chuck Robbins indicated that the quarter had been proceeding better than had been expected only to slow down in April with the spreading virus. The firm's reporting period ended as of April 25th.

(For more on CSCO, see Cisco Systems Charts Are at a Critical Juncture.)

Adjusted gross margin did improve from 64.6% for the same quarter one year ago, to 66.6% for the quarter posted. The firm has long tried with varying levels of success to evolve the security and software businesses, and become less reliant upon routers and network switches (hardware). Infrastructure Platforms remains the big fish in this pond but that business contracted 15% to $6.43 billion (Still 53.6% of the pie.) Services, however saw sales increase 5% to $3.39 billion, while the smallish but still growing Security segment landed at $776 million, up 6%. The key here or the wildcard is/will be in Applications. This line generated $1.36 billion in sales (-5%), but as we said, the quarter changed for this firm in April. This line may just be where the promise is. Webex, which is the firm's videoconferencing service, would be found within this group. Robbins was quoted in the Wall Street Journal as saying, "We are now running our Webex platform at three times the capacity we were running at in February to manage the dramatic increase in participants." Robbins indicated last night that the sudden move to work from home or remotely has served as a "wake up call" for businesses needing to update their technology, and that this could be a positive for Cisco moving forward.

For the current quarter, Cisco sees adjusted EPS in between $0.72 to $0.74, which is above street view of $0.70. Revenue is expected to remain in annual contraction mode, decreasing 8.5% to 11.5%. That implies a range of $11.89 billion to $12.29 billion, which does raise the mid-point. What I think of this guidance is that the firm expects further erosion to legacy businesses, but also increased growth in what is now hot. This in the end should allow for sustained margin improvement from a year ago. 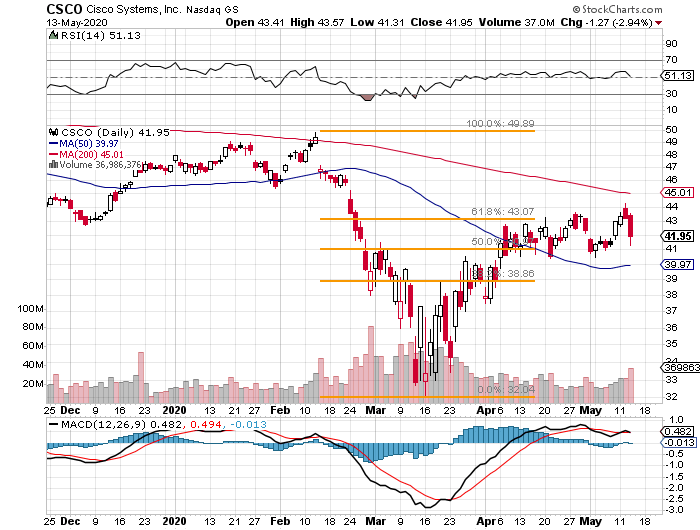 I see this name as possibly range bound moving forward. These shares have obviously moved sideways for a month after rebounding off of the lows of March, and then hitting the 61.8% retracement of the selloff that created that low. There was some pre-earnings volatility in line with broader markets. The stock has to prove itself now. It will take, in my opinion, some doing to either take the shares above the 200 day SMA of $45.01, or below the 50 day SMA of $39.97, until there is a firm-specific news event, or the name gets carried along amid a trend-wide move.

What the firm does have going for it right now, is a CEO, whom I consider to be excellent, an annual dividend of $1.44 (3.43% yield), dependable cash flow, a healthy looking Current Ratio, a low beta (volatility profile), and still $10.8 billion remaining in the firm's share repurchase program. In other words, this name, in my opinion, is not a trader, but it could certainly be a long-term, constructive investment in the next normal.

Get an email alert each time I write an article for Real Money. Click the "+Follow" next to my byline to this article.
TAGS: Earnings | Economy | Investing | Stocks | Technical Analysis | Trading | Software & Services | Technology Hardware & Equipment