Jim Cramer began looking at the components of the Dow Jones Industrial Average (DJIA) in his Real Money column Tuesday. Looking at the first 10 names of the DJIA, Cramer wrote that Cisco Systems (CSCO)  is not enticing above $36 a share.

In this daily bar chart of CSCO, below, we can see that prices have been in a downward tailspin since July. CSCO failed at the underside of the declining 200-day moving average line in early February - a little bit ahead of the weakness in the broad market. The shorter and more responsive 50-day moving average is in a downtrend.
The On-Balance-Volume (OBV) line shows a rise from October to February and that suggests that a large number of traders and investors may have been "off sides" with an overweight long position before the recent market selloff.
The OBV line moved sharply and quickly lower since early February, and the Moving Average Convergence Divergence (MACD) oscillator is bearish.

In this weekly bar chart of CSCO, below, we can see a bearish picture. Prices are below the declining 40-week moving average line so the longer-term trend is negative.
It looks like the weekly OBV line has been in a decline from April 2019, telling us that sellers of CSCO have been liquidating long positions for some time now.
The MACD oscillator turned bearish when it moved below the zero line in September of last year.

In this Point and Figure chart of CSCO, below, we can see how weak prices became when they broke below $43. A potential downside price target in the $28-$27 area is being projected. 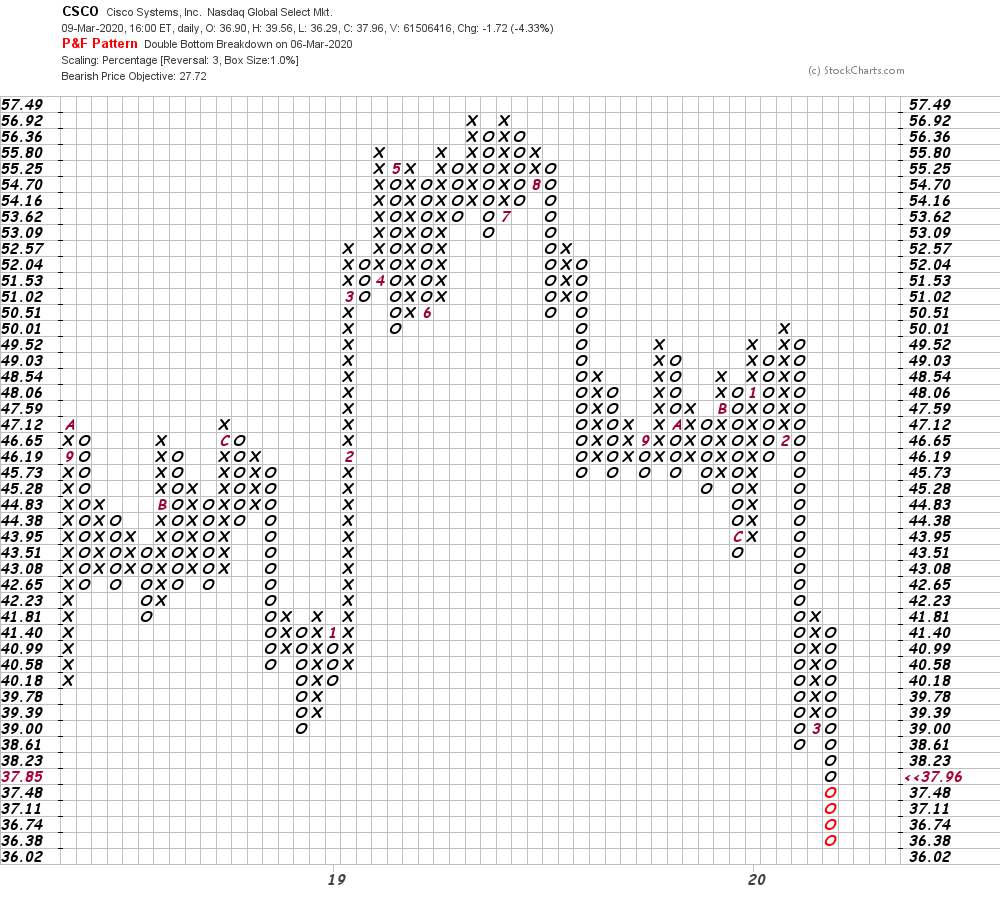 Bottom line strategy: CSCO was in a downtrend long before this "market meltdown" and that suggests that a quick recovery should not be expected. Avoid the long side of CSCO as the charts point to the possibility of further losses in the weeks ahead.

Get an email alert each time I write an article for Real Money. Click the "+Follow" next to my byline to this article.
TAGS: Investing | Stocks | Technical Analysis | Trading | Technology | Technology Hardware & Equipment | Mad Money | Real Money