Cisco Systems (CSCO) is due to report earnings Wednesday evening and it wouldn't hurt to look at the position of the charts and indicators ahead the release of the fundamental numbers. Jim Cramer mentioned CSCO during Friday's Mad Money program, noting that it could be bought only on a pullback. Let's check since Cisco is also Real Money's Stock of the Day.

In this fresh daily bar chart of CSCO, below, we can see a year-long sideways consolidation pattern. Dips into the $41-$40 area have been bought while rallies to around $49 have so far capped rallies. Prices did decline in December with the general or broad market selloff but the support in the $41-$40 area was not broken or violated.

The daily On-Balance-Volume (OBV) line shows a decline from last February to July. Since July the trend has been neutral or sideways with perhaps a new rising trend from late December.

The trend-following Moving Average Convergence Divergence (MACD) oscillator turned up above the zero line in January for an outright go long signal. The MACD oscillator has narrowed in recent days and could soon cross to a take profits sell signal.

In this weekly bar chart of CSCO, below, we can see that prices are above the rising 40-week moving average line.

The weekly OBV line is not a new high but it is close to its best levels of the past three years.

The weekly MACD oscillator shows a more positive position than the daily chart - poised for an outright go long signal.

In this Point and Figure chart of CSCO, below, we can see an upside price target of $57 but a trade at $49.03 is needed for a triple top breakout. A pullback or shallow correction is possible and would probably not turn the chart bearish. 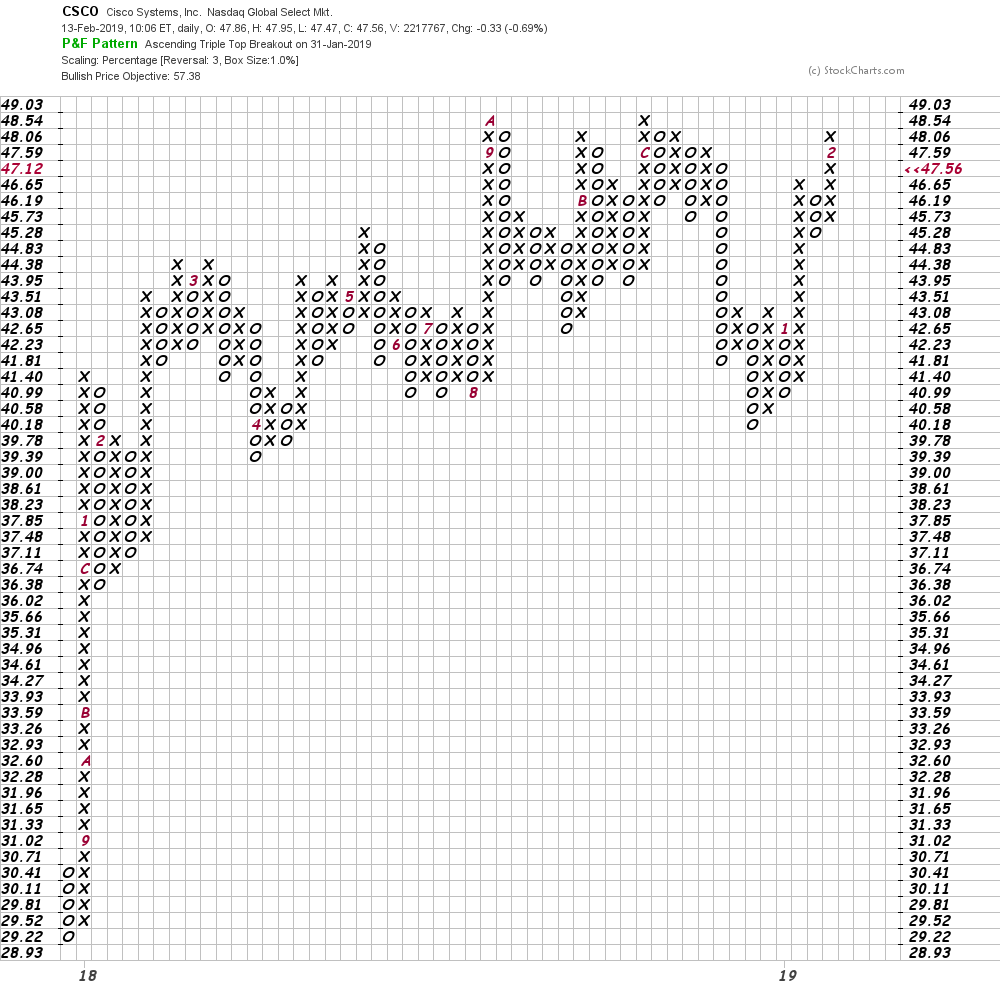 Bottom-line strategy: Our three charts (above) suggest that CSCO could eventually break out to new highs. Will price dip to around $45 to retest the 200-day average line or will they just sprint higher from here? Technical analysis is more of a wind-sock at an airport than a crystal ball that can see all. Traders should be ready for either outcome.

Get an email alert each time I write an article for Real Money. Click the "+Follow" next to my byline to this article.
TAGS: Earnings | Investing | Markets | Stocks | Technical Analysis | Trading | Technology | Technology Hardware & Equipment | Stock of the Day

Confused About the Market? Let's Take a Step Back