Robbins said the world transitioned to working from home in record time and Cisco's Webex conferencing platform tripled in size overnight. The company's VPN and security software were also in high demand.

When asked whether the work-from-home trend is here to stay, Robbins said companies will certainly be reevaluating their hiring practices and their real estate footprints going forward.

Turning to the company's outlook, Robbins said Cisco is working to improve gross margins and is generating 50% of its revenue from software and services as planned.

Let's turn to the charts and indicators for some technical signposts.

In this daily bar chart of CSCO, below, we can see that prices have been weak for the past 12 months at least and not just in February and March. Prices made a low in the middle of March with the rebound in the broad market and rallied up in between the declining 200-day moving average line and the bottoming 50-day moving average line.

The trading volume was heavy in late February and throughout March but the On-Balance-Volume (OBV) line, while making a low in March, has not rebounded. A flat OBV line tells me that buyers and sellers are sitting out the price recovery.

The trend-following Moving Average Convergence Divergence (MACD) oscillator moved above the zero line last month but its pattern is not robust and we could see this indicator weaken again.

In this weekly bar chart of CSCO, below, we can see that prices have been in a decline since the middle of 2019. Prices are below the declining 40-week moving average line. The weekly OBV line has been in a downtrend since April of 2019 and tells us that sellers of CSCO have been more aggressive for months now.

Last month the MACD oscillator crossed to the upside from well below the zero line. We have a cover shorts buy signal but we are a long way away from an outright buy signal.

In this Point and Figure chart of CSCO, below, we used daily price data. Prices are in a down column of O's now but the overall pattern shows more accumulation than distribution so an upside price target of $50 is still shown. A trade at $40.18 is likely to weaken the picture. 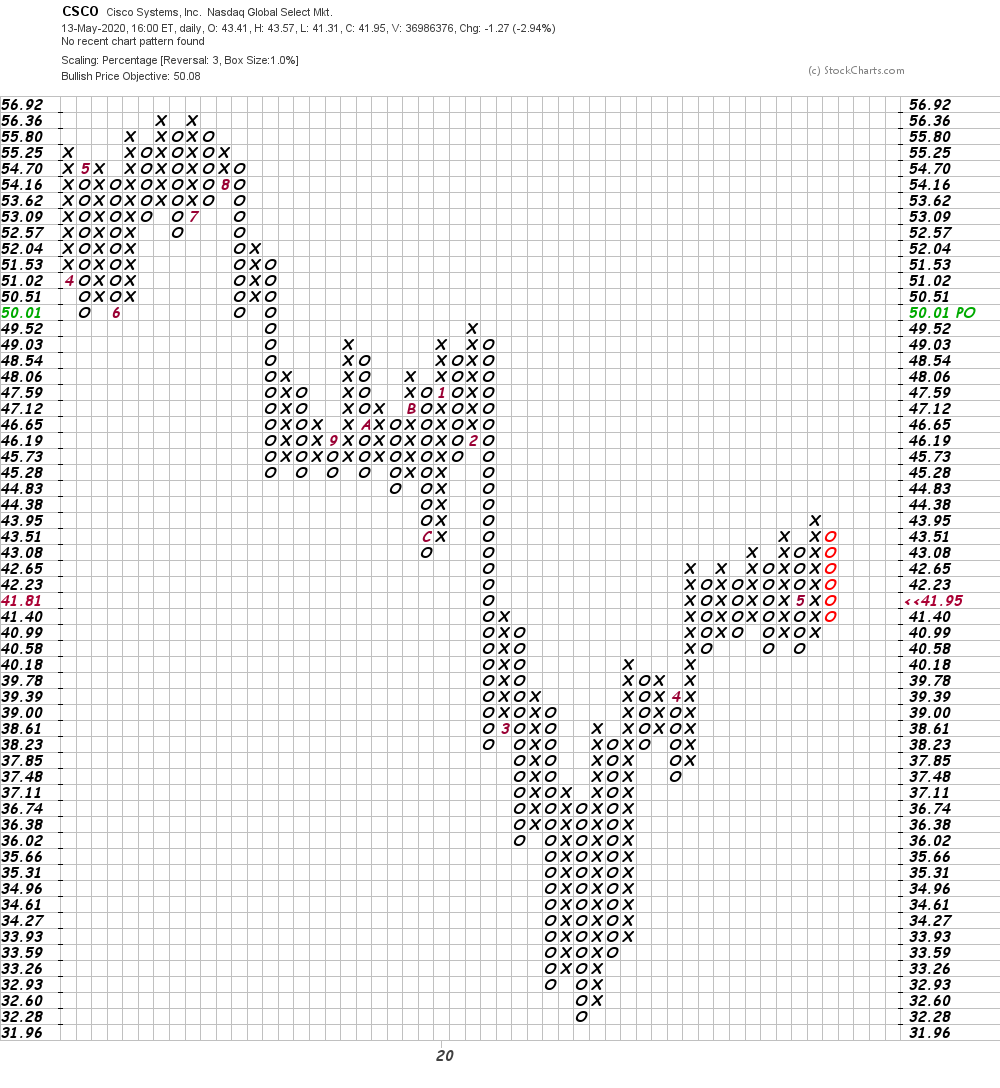 Bottom line strategy: The charts of CSCO are at a critical juncture in my opinion. Weakness under $40 will break the 50-day moving average line and produce a new low for the move down on the Point and Figure chart (above). Investors in CSCO need to see the company act better than the broad market. If you were a buyer into the March lows consider reducing your long position.

Get an email alert each time I write an article for Real Money. Click the "+Follow" next to my byline to this article.
TAGS: Earnings | Economy | Investing | Stocks | Technical Analysis | Trading | Software & Services | Technology Hardware & Equipment | Mad Money | Coronavirus