This time? I have been an on-again, of-again investor in Cisco Systems (CSCO) for ages it seems. Oh, years ago, the name was a titan of the U.S. economy's early shift toward cro magnon life after eons of living in trees and caves. That long ago? Maybe that's just how it feels. It's been a long while since Cisco Systems has rewarded my faith. It's even been longer than a little while since I finally gave up on them and moved on. Is that the key? The fact that I no longer think "they" can. I wouldn't call myself superstitious.

Then again, I wore the same t-shirt under my pads for every hockey game I played in from junior year of high school through college, and through adult rec leagues until the broken ribs and dislocated shoulders just became a bit too frequent by age 38. I was forced into retirement by my employer at the time, who was not in the wrong. Being an NYSE floor trader was an extremely physical job. Walking around with a cane or having to write with your off-hand, while a handy skill... does impact speed of execution in an auction market.

We all know that Cisco has been trying to shift away from it's legacy technology hardware businesses as those businesses have been winding down for some time now, as the world moves toward wireless, decentralized kinds of business technology. In other words business is moving toward the cloud, and nothing can stop or reverse that. Cisco has made some headway in software, and in cybersecurity, creating some momentum in what is now the all-important. Recurring revenue is what matters in this post cro magnon era. This is why last week, the firm completed the acquisition of ThousandEyes, the network visualization company.

Not much is expected when Cisco reports fiscal fourth quarter earnings on Wednesday (this) afternoon. Wall Street is looking for an EPS of $0.74 on revenue of $12.1 billion. Both numbers would be greater than 10% year over year declines. Of course, the Covid-19 pandemic is an issue. Investors may look past a 10% contraction across these top and bottom line metrics. The focus may fall to both the firm's ability to sustain cash flows. First, Cisco has not only sustained the dividend (currently $1.44 annually for a yield of 3.05%), but actually increased that payment to shareholders for 10 consecutive years. Second, guidance for FY 2021 will count more than anything else. Currently, sell side analysts are modeling EPS of $3.15 on sales of $49.5 billion.

Is There a Wednesday Trade Here? 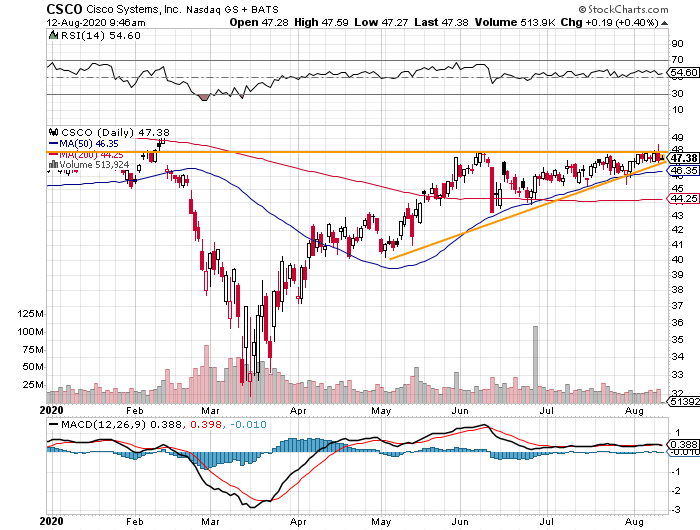 You kids see what I see? The stock appears to have moved sideways for months, up almost 50% since the trough of market despair back in March. Basically, that's just performing with the market. That said, it is really just the top of the chart that has gone sideways. The incredible run of higher lows has formed a "clear as day" ascending triangle, while Relative Strength and the daily MACD have flatlined. Know what I think? This stock is going to move explosively with extreme prejudice in direction. I just don't know which way. Big help I am, huh.

Just a hunch, it will to the upside. CEO Chuck Robbins? He's one of the smarter cookies in the box. I think he's figuring this out in real time, and I think he is extremely competent. Do I like him as much as Advanced Micro's  (AMD) Lisa Su? I don't like anyone as much as Lisa Su, but if she's Tom Seaver, he's still Catfish Hunter. I'd take Catfish on the mound every fourth day, how 'bout you?

The Trade (in minimal lots)

By the way, unlike 99% of the rest of the financial pundits you read everyday, I am going to put this trade on today, but after this publishes, so you can go first. Such a nice man, that Guilfoyle. Aw, thanks.

Best Case: Shares are called away in November at $50. Investor realizes a profit of 9.9%.

Worst case: Shares trade lower over time, the trader now mired with a net basis of $45.50, will likely receive a dividend payment of $0.36 in October, reducing net basis to $45.14. At that point the trader finds a new call with a three month window to write against the position. This is called risk management. This creates benefit through theta and it is a low risk way for traders to sometimes sell shares at prices below purchase prices ... for a profit. Understand?

Get an email alert each time I write an article for Real Money. Click the "+Follow" next to my byline to this article.
TAGS: Dividends | Earnings | Investing | Stocks | Technical Analysis | Trading | Technology