On Wednesday evening, Cisco Systems (CSCO) released the firm's fiscal fourth quarter (2022) financial results. For the three month period ended July 30th, Cisco posted adjusted EPS of $0.83 (GAAP EPS: $0.68) on revenue of $13.1B. Both numbers managed to beat Wall Street, while the revenue print suffered a minor (-0.2%) year over year contraction. Earnings adjustments were primarily made for share based compensation, and amortization of acquisition-related intangible assets. GAAP Net income decreased 6.45% year over year to $2.815B.

The better than expected performance was largely due to improving supply chain conditions. In the press release, CEO Chuck Robbins said, "Full year product orders and backlog are both at record highs and reflect the strong demand we continue to see for our innovation and the overall value we bring to our customers as they accelerate their digital transformation."

CFO Scott Heron added, "Total revenue exceeded our expectations in Q4, as a result of our strong execution and the numerous initiatives we have taken to reduce the impact of the global supply situation."

Total Product revenue printed at $9.688B, which was flat year over year, producing a product gross margin of 59.1% compared to 62.7% for the year ago comp.

Total Services revenue landed at $3.414B, which was flat year over year, producing a services gross margin of 67.5% compared to 66.2% for the year ago comp.

Total Product revenue generation is then broken out into five business lines:

Secure, Agile Networks generated $6.094B in revenue, down 1% year over year.

Internet for the Future generated $1.257B in revenue, down 10% year over year.

Collaboration generated $1.164B in revenue, up 2% year over year.

End-to-End Security generated $984M in revenue, up 20% year over year.

Total assets added up to $94.002B including $40.873B in "goodwill" and other intangibles. That's a bit much for me. I don't like it when intangible assets get up to around something like 43.5% of total assets. Total liabilities less equity ended the quarter at $54.229B, including $8.416B in long-term debt.

This is a strong balance sheet. I don't love the beefy entry for goodwill, but any time a firm can pay off it's entire debt-load out of pocket, there is not going to be much to complain about.

Wow. Is Wall Street ever split on CSCO. I have found 15 sell-side analysts that both are rated at four stars or more by TipRanks and have opined on this stock in any way since these earnings were released last night. Of these 15 analysts, after changes have been made, six rate CSCO as a "buy" or their firm's equivalent of a buy, eight rate CSCO as a "hold" or their firm's equivalent of a hold, and we have one outright "sell" recommendation. Of the 15, four declined the opportunity to set a target price. Those four were all drawn from the "hold" group.

Okay. These earnings are solid. Supply chain issues are improving. The order backlog is at a peak. These are all positives. Growth is not expected to get wild. The firm expects to see above consensus, but still very pedestrian sales growth. In my opinion, Cisco Systems is kind of like a utility. Steady. Don't expect Robbins to hit a grand slam. Don't expect Robbins to make any huge mistakes.

The firm treats shareholders well. Free cash flow for the quarter, though quite robust ($3.5B) was still down significantly (-19%) year over year. Still, Cisco repurchased $2.4B worth of common stock over the three months at an average price of $44.02. The firm leaves $15.2B on its current authorization. Cisco also paid out $1.6B in dividends, and currently yields 3.21%. See. Kinda like a utility.

Don't get long CSCO looking for growth, some beta and hopefully a bit of alpha. Get long CSCO (if interested) if seeking a defensively postured name in a growth industry that might get swept along passively should markets continue to rally. Treat CSCO as a lower beta income stock. 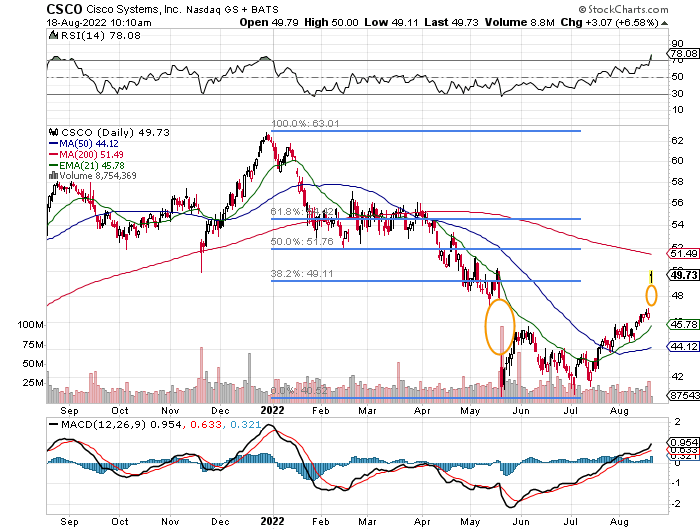 The good news is that CSCO filled that gap from May this morning. The bad news is that this morning's "up opening" has left CSCO a new gap to fill... to the downside. Now, the shares will contend with potential resistance at the 38.2% Fib retracement of the late December through early July selloff.

I see the shares as probably getting "stuck" between that spot and its own 21 day EMA. Personally, rather than chase my way into the stock (and I think you do want the equity if one is in this name, as that's how one realizes tehe3.2% yield), I would rather sell naked puts with the intention of raising some dough in order to reduce bet basis once the stock is put to the trader.

Get an email alert each time I write an article for Real Money. Click the "+Follow" next to my byline to this article.
TAGS: Earnings | Investing | Stocks | Technical Analysis | Trading | Technology