Promises In The Dark

Frightened? It appears that at least some of you are. They say that worst case scenarios have a way of not happening. Easy to fall back on idiom. Especially easy when it's not one's own skin in the game. Beware of talking heads representing large firms. Their words are not always their own. Market crashes happen. Will you see it coming? You might. Preparation, as much mental as financial, will be key to "peace of mind". At some point, the bough breaks, we know that. Conditions will deteriorate rapidly when that point is reached, not that is has been... or even will be. Uncertainty. One may never complain about uncertainty. For in certain times (never seen 'em), there would be not a soul to trade with taking the other side. Worst case, the Fed will save us, if they can. Remember, it is their error that markets now feel. A misplaced aggression that comes home to roost. The major indices stand in a state of correction, just a few percentage points away from their recent all-time tops.

A few folks reached out last night. There is concern among small investors, concern that this may be "the big one." I do not think it is. I also presume that I know nothing. On Tuesday, equity markets turned a winning morning into a losing session... pace of the selloff increasing dramatically over the final two hours of the regular session. Volume increased as well at the main exchanges, though perhaps not a culprit... there was a broad MSCI re-balance that did increase closing volumes and did skew pricing to some degree. Breadth was awful, declining volume at the Big Board outpaced advancing volume by more than three to one. The peanut gallery speaks of the 2800 level for the S&P 500 as support, and other than the index closing there, I see no reason for that level to do anything special. 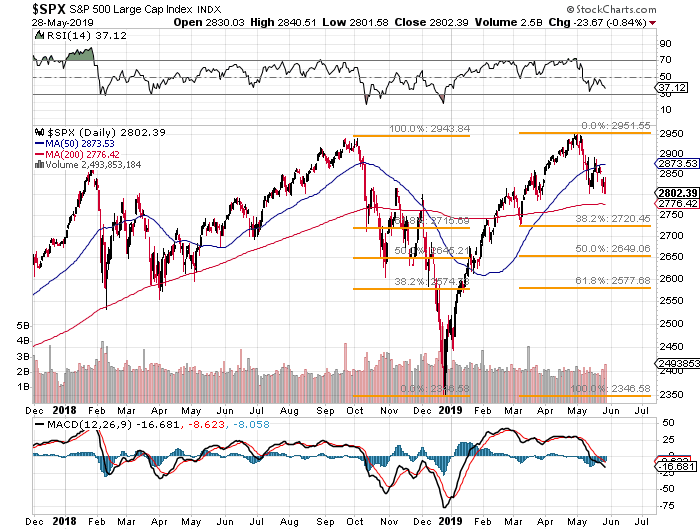 What I do see is a 200 day SMA (simple moving average) of 2776, and a 40 week SMA (not shown) of 2769. In there somewhere is the best spot (just my opinion) for technical support to try to form up. Then it's on to standard Fibonacci retracement levels. The sound you do not hear is the silent, sad fading away of hope. Hope in anything resembling sustained global economic growth.

Alex, I'll take sovereign debt at any price. It might be as simple as pricing out a resolution to the trade war between the U.S. and China. Perhaps something far more complex is at work here. Perhaps markets are somehow working back into price discovery a prolonged Cold War period. Remember, the "peace dividend" of the 1990's? The economic boom provided by the end of a more than a 40 year cold war with the Soviet Union? The winds of change? Good chance they blow both ways. Sell-side economists have started to move expectations for U.S. Q2 GDP below the 1% mark. The word "recession" is now being bandied about, not just for earnings... forcing a general move into safe haven. My thought on this is that those charged with financially defending themselves and their families must understand what a persistently inverted yield curve means in terms of potential long term growth. You and I are going to have to embrace short to medium term volatility across global markets, unless central banks move pro-actively.

Not just U.S. Treasury yields, but nearly all global sovereign debt, at least all sovereign debt considered reliable has seen a price shock. Unfortunately, what becomes painfully obvious is that for planet earth, reliance upon once considered perverse monetary policies have become addiction. The end game may take eons (it may not). No need to run around in circles, but the only true escapes from the debt super cycle will be through an extremely painful re-setting period. Monetize the debt? Tremendous period of forced austerity that no politician would ever embrace? Understand that, do not fear it. Fear creates panic. Mistakes well thought out might be forgiven. Panic driven errors are to be avoided.

While the U.S. economy showed signs of slowing across many fronts in April, Consumer Confidence has remained sky high, as has hiring and small business confidence. The real danger may come when there is serious erosion across these localized strongholds... all three are reliant upon one another. I have told folks for a good bit now, to raise cash levels in order to tamp down personal exposure to volatility. You think that's a double edged sword... and it is. I don't have your easy answer. Remember this as you make your way through the rest of your life. Opportunity cost is painful, but it's a day in the park compared to loss of principal.

As I scoured the many news sources that I track on Tuesday evening, I came across this item in Wednesday's China Daily. Apparently, the NDRC (National Development and Reform Commission) has made it known that China is willing to continue with being the world market supplier of processed rare-earth metals. That said, the NDRC is opposed to those who might use these products to "suppress and dampen China's development." I wonder just whoever they might be referring to. Cold War.

On that note, the Trump administration took a pass on naming China a currency manipulator on Tuesday, while keeping China and eight other nations on the official watch list. Olive branch?

I have often tried to drill home my rules for working around trying conditions. They are basis. Understand to Identify to Adapt in order to Overcome, then Maintain. Easy as pie. Not. There are other things to concern oneself with. While the above guidance works for any facet of life, there are a few gentle tidbits of information that I want home-gamers to be fully cognizant of, as I know some of you will shop the dips, and some of you will get in too early. Guidance on discount shopping...

1) Trend. the vast majority of stocks move with trend. As markets rise, this disguises the weak. As markets retreat, the worthy are discounted. Know the difference.

2) Revenue. Both quarterly, as well as sustained over time. There is no profitability, the bread and butter of corporate existence without sales. Nothing makes my heart sing than consistent revenue growth over time.

3) Earnings. There must be profitability, or at least an understandable path toward profit. There can not be a recent decline in earnings growth if I am to spend capital in this environment.

4) Best in Breed. Find the industry group that you think will rise first. Cling to the out-performers in that group.

5) Volume. Watch trading volume on days where there are big moves in your names. This is the most simplified way to look at institutional participation, also known as accumulation/distribution. Always helps if one can move in the same direction as the big bucks.

According to analysts Joseph Moore and Craig Hettenbach, inventories across the semiconductor industry as a whole actually grew in the first quarter from the fourth, from 85 days to 93 days. This is versus a historical norm of more like 69 days. This increase has these analysts cautious on the space into the second half of the year, a time that most investors had expected to see improvement by, as several firms had guided in that way. Morgan Stanley points out that the oversupply issue is perhaps most overt in the memory space, and they do single out Micron (MU) as a name bearing 133 days of inventory. The shares behaved accordingly. However... among the chips there rises a champion.

This past weekend, Advanced Micro Devices (AMD) announced the firm's 7nm product roadmap at the Computex show in Taiwan. What is apparent is that much to the chagrin of competitors such as Intel (INTC) , and Nvidia (NVDA) , AMD stole the show. After introducing the new Zen 2 CPU, a next generation AMD Ryzen desktop processor, new RDNA gaming architecture, and the Radeon RX 5700 series gaming graphics card, it becomes clear at least to this investor that AMD is right now poised to take on more of a leadership role in this industry than perhaps ever before. Did we expect less from CEO Lisa Su? Could we expect less from Intel CEO Robert Swan?... who now clearly must scramble, as according to Cowen's Matthew Ramsey, that firm will "no longer be able to rely on its n-node silicon advantage." Ramsey also expects these new products to "drive above consensus growth, share gains, margin expansion, and AMD share appreciation." Su had to come out swinging after reporting the firm's first quarterly sales decline in three years one month ago. I think maybe she has. 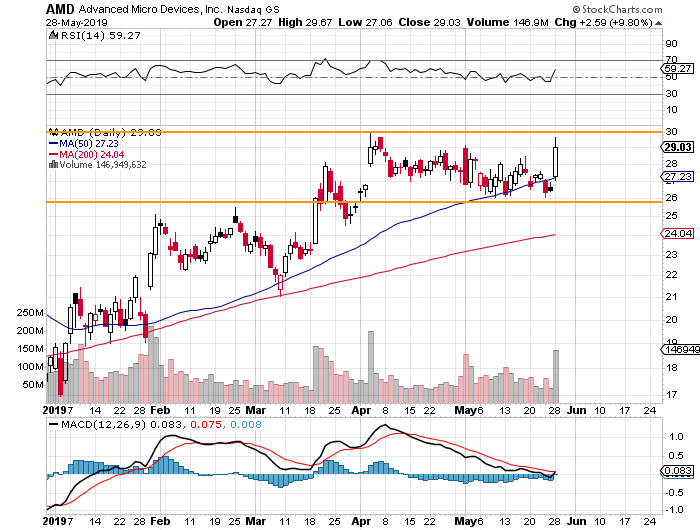 I think the eyes are immediately drawn to the increase in volume that produced an increase in share price that bucked both market and industry trends. See that $30 level? That's your springboard. My guess would be that there could be some profit taking in this name this morning as some traders will be forced to find a way to pay for losses experienced elsewhere.

For me, the name is still an okay buy up to that $30 mark. The funds moved in yesterday above the 50 day SMA. My thought is that a second wave could move in with a take and hold of that spot. My target is $36 for AMD, that has not changed. I think now, we move our panic point up to $27 from $25. For those long the equity, covering that position with July $36 calls still pays about 40 cents.

Get an email alert each time I write an article for Real Money. Click the "+Follow" next to my byline to this article.
TAGS: Economy | Investing | Markets | Options | Stocks | Technical Analysis | Trading | Semiconductors & Semiconductor Equipment | China | Market Recon