It happens perhaps a couple of times a year. Always around the holidays. Extended family gathers around. There is food. Too much food. Usually at least two dishes that would suffice as an entree. Then, not one side dish, but many. There will be desert served later in the evening. Quite honestly, by that point, though the deserts offered will have originated in either a well known bakery, or in someone's own kitchen... these deserts will end up underappreciated. Why? Because, the folks attending this feast have already eaten much, and have hit their personal resistance. These fine folks may sit with a conversational cup of coffee, but as far as appetite is concerned, they are done.

Yes, the Dow Jones Industrial Average moved toward a fifth consecutive weekly increase on Friday after news had broken that the partial U.S. federal government had ended (at least for 21 days), and that the Fed might shift strategies on their quantitative tightening program. But I would not take much solace from what I see in the weekly charts as I do my homework on Sunday night/Monday morning. Let me show you. By the way, that fifth consecutive weekly increase did not stand across all major indices. Both the S&P 500 and the Dow Transports failed to make this claim. That said, across every major index, on a weekly chart, last week presents as what looks like a hammer, but the technical analysis crowd refers to as a "hanging man." I am no true disciple of technical analysis alone. I find fundamental analysis studied through the prism of both policy and macro-economic trend to be more determinant of direction, but a trader interested in knowing where the bus stops are has to at least acknowledge that technical analysis is more important than ever, especially as this is what often drives algorithmic response to certain trading levels.

To me, that "hanging man" is best illustrated on a weekly chart of the S&P 500, but is visible across the marketplace. Bearish reversal? It appears to this trader, that with so very much on the plate this week, and there really is so much traffic to our immediate front that some risk-off behavior early in the week would make sense. Especially after markets already are digesting those late week positive headlines.

Hope you brought your "A" game. As the week progresses, there will be little time to rest. That's fine with us. You know who needs rest? The wicked, that's who. The pure of heart will do what needs to be done when it needs to be done. The pure of heart will always rise to meet the challenge. Are you true? Your family counts on you. Rise. Be worthy of all that your ancestors have passed down. No witnesses needed. You'll know if you've done your best. You'll know if you have earned your place at the table of honor. Meet the challenge.

Before we can even focus on the various avenues that must be defensed, understand that of the names that comprise the S&P 500, 153 will report their quarterly results this week. Not too many of them will step to the plate today, nor on Friday. That leaves quite a mosh pit for those three days in the middle. These names will include such high profile stocks as Apple (AAPL) , Microsoft (MSFT) , Facebook (FB) , Tesla (TSLA) , and Amazon (AMZN) , among many others. As if that were not enough

The FOMC will announce their decision on monetary policy this Wednesday, I will add to that down below. This meeting comes with a press conference in tow. I believe that holding a press conference at the conclusion of all eight policy meetings every year is the correct way to go. The next logical step will be the discontinuance of the quarterly economic projections as they do move markets and have seldom been anywhere near correct. In addition to the Fed, the crucial high level meeting between Chinese and U.S. delegations will take place this Wednesday and Thursday in Washington. China has already offered to buy more of what they need (agriculture, oil) from U.S. producers. This offer in theory is intended to reduce the trade gap between the two nations over five years to nearly zero. Problem there would be effective enforcement. The two sides also remain far apart on the larger issue, which has always been unfair trade practices that include intellectual property theft. The marketplace will react to this event in a huge way. Should negative headlines prevail, that would lead markets toward the pricing in of a greatly increased series of U.S. tariffs on Chinese imports on March 2nd. These meetings will at least in the short term out-rank the Fed, and out-rank the fact that this is January "Jobs Week" in terms of market gravity.

The Fed initiated it's program of balance sheet management in 2017. The plan was to start the roll-off of maturing securities at the monthly rate of $20 billion per month, and barring catastrophe, then work that number up to $50 billion. Once at that level, "QT" was supposed to hum along in the background quietly, harmlessly. Long time readers know that your author had vehemently argued against policy that included the simultaneous increase of short term interest rates while reducing overall potential liquidity in the economy prior to making an attempt to repair the yield curve. I was not alone on this, but our voices were certainly few. Seemed obvious. Somehow, from the castle, those charged with the implementation of monetary policy managed to not take heed of what the actual practitioners tried to tell them ahead of time.

Friday's well received article at the Wall Street Journal did aid in that day's morning rally. I would have made comment on Friday, but the article was not published until 5:30 that morning, and I am usually wrapping Market Recon up by that late hour. I think it obvious that there will be no change in short term rates this week. I also think it likely that at least in the press conference, this balance sheet management program will be addressed. Market behavior throughout the fourth quarter proved out our thesis that upon hitting turbulence, the continued reduction of potential liquidity in the economy would be noticeable at the point of sale, thus injuring the American public. While I would favor a reduction in the pace of quantitative tightening, I would not favor a full stop to the program as the balance sheet does remain too large. If the committee truly is taking a powder on short term rate hikes, then a slower pace of QT would still be appropriate.

The truly hopeful part of the Journal article comes toward the end for me. It is toward that end where mention is made of the latest Fed Minutes where some at the Fed would like to move the portfolio toward more shorter-term Treasury securities. We all know now that former Fed Chief Ben Benanke misunderstood the impact of holding longer term securities on the balance sheet. While Bernanke believed this to be stimulative (and to some degree it was), he completely swung and missed when it came to the damage that this caused to the yield curve, contributing mightily to the mess that Jerome Powell currently finds himself in.

While I do not expect moving the average maturity of the Fed's portfolio to be market friendly, I do think that by compressing the short end of the yield curve at least from a broad macro-economic view, necessary repairs to that curve would be under way. Then, and only then might we as a nation be in a position to address fiscal irresponsibility.

After all of that, a nation that we all love could possibly experience honest, sustainable growth. Or we could just perpetuate our existence in the endless wilderness created by the debt super cycle. You do understand that even canned food has an expiration date?

I hear from at least a couple of you every week on this name. What now? What now that Apple is so far off of it's highs? What now, that Apple is well off of it's lows? What now that the name trades at more than 13 times forward looking earnings? Can we trust those earnings? The Chinese economy is still spiraling toward much slower growth. Will stimulus there heal as intended? If it does, will this get Chinese people to purchase Apple products?

We already know that hardware sales are a problem. Is the service component slowing down now too? Apple plans to break out their gross margins across the firm's business lines for the first time. Likely, I would think this to mean that there is a story in place that Tim Cook wants us to see. There is a lot that we can not know until Tuesday afternoon.

Personally, I have taken some of my Apple long off ahead the numbers, but that was a tranche that I had purchased near the bottom in early January. That portion was never intended to be anything more than a trade, and it served it's purpose upon hitting target. I understand your concerns. I myself, will remain long some shares moving into earnings. 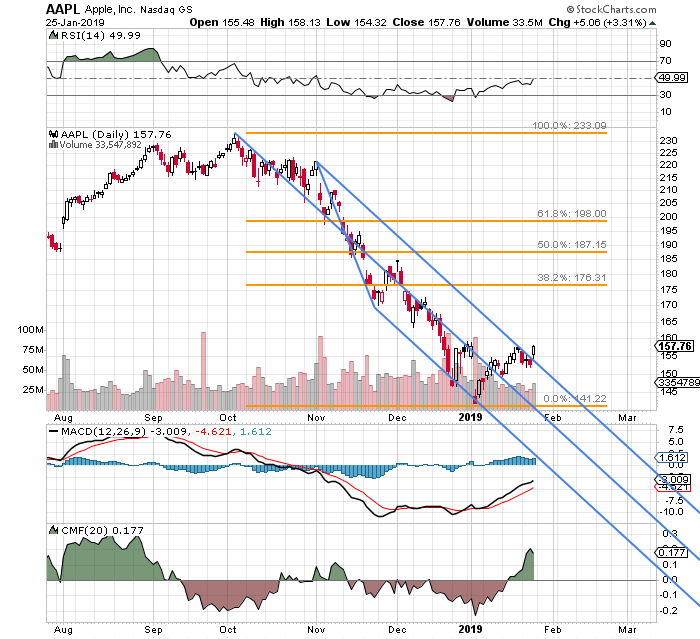 As AAPL cracks my Pitchfork to the upside, I suspect that this morning's negative vibe may pull the share price back below the upper trend line. Remember, broken and pierced are not always the same thing. All of our short-term technicals are improved. That will all either be reversed or confirmed by late Tuesday. For those of you who have reached out, there are several ways to crack a walnut. Let's get about this... examples are illustrated in minimal lots.

This adds $2.79 to the investor's net basis. That's a little rough, but at least ownership of this put offers unlimited protection to the downside below the $155 level throughout the remainder of the week. A trader could partially subsidize this purchase by allowing for more risk.

This reduces the debit for the options outlay to a more affordable $1.44. The downfall would be that should AAPL shares fall precipitously, the capital extraction from those shares would be limited to a net $3.65.

Get an email alert each time I write an article for Real Money. Click the "+Follow" next to my byline to this article.
TAGS: Economic Data | Investing | Markets | Options | Stocks | Technical Analysis | Trading | Software & Services | China | Market Recon