So... You're Saying There's a Chance

You can smell it. I know you can. Blue skies. Green grass. The first day of Spring Training. The 3 month/10 year spread trying to hold at a positive 13 basis points. Fresh, morning air. Close your eyes. What you smell is optimism, and isn't it grand? More on that below. Economic growth is one of the more difficult things that there is to predict. If it were so easy, the central banks of the world would have better reputations.

That smell though. Lingering. There is a chance that Presidents Trump and Xi sign something when they meet up at the APEC summit this November in Santiago, Chile. Chinese Vice Premier Liu He served up some diplomatic softballs over the weekend that President Trump cordially returned on Monday, enhance by comments made by White House economic adviser Larry Kudlow. Kudlow mentioned the possibility that the December 15 deadline for the implementation of a 15% tariff on the remaining $155 billion worth of Chinese exports to the U.S. (that happen to be consumer-centric) might not go off on schedule.

Two other high ranking U.S. officials, Trade Representative Robert Lighthizer and Commerce Secretary Wilbur Ross, sounded far more cautious in discussing the topic, but that was that. The algos had what they needed. Monday would be a "risk on" kind of day.

Down Dooby Doo Down Down

If you go, then you know that I'll be blue. Why? Well, because breaking up is hard to do. Just ask British Prime Minister Boris Johnson. After sort of agreeing to a deal last week that appeared to displease the Brexiteers, being forced to grudgingly write a letter best not written to Brussels, and then suffering the indignity of being denied a second vote on the current deal once it appeared that new votes had been captured, it now appears that yes, Johnson will get one more chance.

Parliament will put this Brexit deal to vote on Tuesday. About all we know right now is that the vote will be close. At stake is an orderly withdrawal from the European Union for the United Kingdom that will include the settling of financial matters, the cross-border treatment of citizens, as well as the border condition between the Republic of Ireland (part of the EU), and Northern Ireland (part of the UK). How does this impact U.S. markets? Make no mistake, anything that impacts U.S. dollar exchange rates impacts U.S. markets, and anything that impacts global growth also impact the U.S. Treasury yield curve. I think we all know by now that the yield curve is central to just about everything, and whether symptom or cause, the most obvious emblem of an increased level of economic optimism here in the U.S.

How interesting is it that the U.S. equity market's two broadest indices, the S&P 500 and the Nasdaq Composite are working their way back toward a retest of those "double top" highs of July/September? Does it matter that trading volume at both the New York Stock Exchange as well as the Nasdaq Market Site decreased on Monday (a day where winners beat losers by roughly two to one) from Friday (a decisively negative day)?

How about this? Remember the underperforming small caps? The Russell 2000 ran a full percent to the upside on Monday, and has really been trending higher since September melted into October. You may not have realized that as the small caps have been this mild, and as Boeing (BA) has slowed down progress for the "blue chip" Dow Jones Industrial Average, that the Russell 2000 at +14.95% year to date, has all but caught the Dow Industrials, now +15% ytd. I can hear Mel Allen now... "How 'bout that?"

Boeing will report the firm's third quarter financial performance on Wednesday morning. At this point, will numbers even matter? Boeing has not officially amended plans to get the 737 Max back into service sometime in late 2019. That said, there is talk at the European Union Aviation Safety Agency that test flights for the aircraft might not be set until mid-December. That would would make early January hopeful, and this is just one sole regulator. Boeing has to convince a planet's worth of aviation safety regulators.

My grandfather taught me a lot about baseball. Born in the 1890's, he saw them all. Combs, Gehrig, Ruth, Meusel, and Lazzeri. They were known as the "murderer's row" because of what they could do to opposing pitchers. They permanently changed the old ball game. On Monday, the game changed yet again for Boeing investors. This new line-up included Credit Suisse, UBS, Baird, Gordon Haskett, Bank of America Merril Lynch. They all either downgraded the shares, lowered target prices, or just made plainly negative commentary. Perhaps the most damning commentary was made by Credit Suisse. Analyst Robert Spingarn who wrote on Monday, "We can no longer defend the shares in light of the latest discoveries, discoveries which significantly increase the risk profile for investors." Credit Suisse also makes mention of the possibility of $3.2 billion in additional charges over the next four months.

I have an idea. For Boeing. Remember McDonnell Douglas? That defense contractor/manufacturer of commercial airliners merged into Boeing way back in 1997. Maybe, producing an civilian airliner (Let's call it the DC-12) in the same class as the 737 under that name as an alternative brand to Boeing name might be wise. What do I know? Just an idea.

Jim Cramer's term. He is right though. Can any stock bring the broader market along with it like Apple (AAPL) can? Apple does not report until next week, so there is plenty of wood to cut between now and then. Fact is though... the stock broke out now, and took my target price on Monday. Raymond James analyst Chris Caso (4 stars) maintained AAPL at "outperform" on Monday while increasing his price target from $250 to $280, which I believe to be an industry high. My target had been a far more pedestrian $240, so I, by my own code of discipline, had to act in some way as a target had been breached. 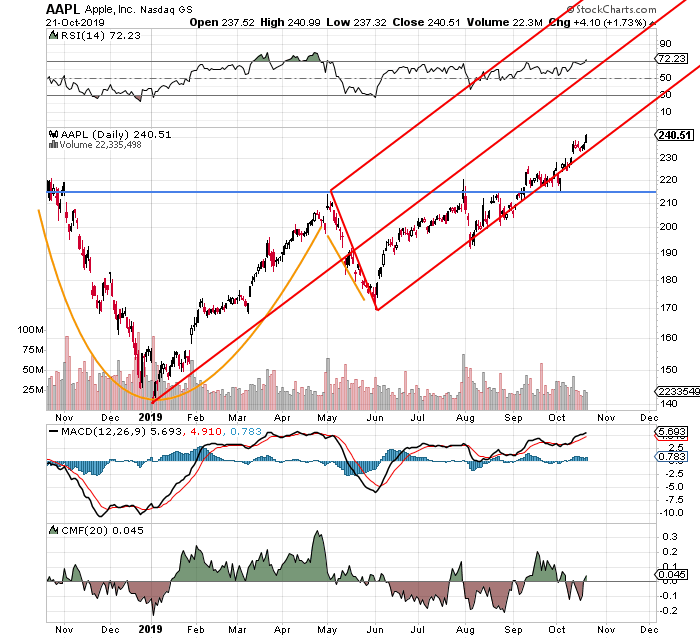 I showed you this chart a few weeks back. It's still working. The recent pop has merely served to hold the lower trend line of our Pitchfork model that dates back all year. Due to the recent action, the shares do appear mildly overbought. As my own rules demand, I have taken something off, hopefully to add back on when the shares do wiggle. Forgive me Jim. I own it, and I trade it. The daily MACD is currently running extremely hot. Money Flow has just turned positive. Could this name run into earnings? It could, but that would, based on my experience, lend itself toward a poor reaction to that release regardless of performance.

Some will see that wiggle at the start of August as a new formation. I do not. I see what is happening now as a continuation of a breakout of a cup with handle pattern that has been periodically impacted by trade headlines (as they likely are right now). Interpreting the chart in that way places the successful pivot at $215. If this Pitchfork can hold through earnings, the shares might "conservatively" move into a range somewhere in between $258 and $269.

Helmets on? Chinstraps buckled? Foil taped? Check this out. A quick scan of sector ETFs reveal three sectors, no less than three, on the verge of broad-based breakouts of their own. Want to talk optimism? Take a look at these six month snap shots.

The Consumer Discretionary Sector trades broadly at 21.4 times forward looking earnings, the highest multiple awarded to any sector in aggregate. That's well above this sector's five year average of 19.4 times. Regardless, headed for a retest of the 2019 double top highs.

Looks kind of the same, doesn't it? Yet, this is the Information Technology sector. The clash of hardware and software. The sector, though maybe it should not be just one sector, trades at 19.7 times froward looking earnings. Again, well above a five year average of 17.2 times. Again, trying a jailbreak.

Another fairly similar chart. this one is different though. This is the many years depressed financial sector. This one represents a left for dead sector that trades at just 12.2 times forward looking earnings versus a five year average of 12.9 times. Yes, even these guys are trying to break out. I told you the 3 month/10 year spread was the key.

The point here is that something very broad is starting to happen. Am I still cautious? Yes, of course I'm still cautious. I'm trading the mortgage and grocery money over here. My P/L is just that... my P/L. That said, the set-up has been well... set up. Now, all of the cards just have to fall the right way. Should be a cinch.

Get an email alert each time I write an article for Real Money. Click the "+Follow" next to my byline to this article.
TAGS: Earnings | Economy | Investing | Markets | Politics | Stocks | Technical Analysis | Trading | China | Europe