5:15? Actually much, much earlier. Wednesday morning. Equity index futures turned for the better as central banks in India, New Zealand, and Thailand all either reduced benchmark interest rates when consensus was for no change, or cut to a greater degree than expected. The global trajectory for monetary policy could not be more clear. Your alarm will not force you back into consciousness for a few hours, but the US 10 year note yields roughly 1.68% as I write, after scraping along as low as 1.667%. Stay alert here. The U.S. Treasury Department lets $27 billion worth of these securities fly this afternoon at 13:00 ET. It would surprise at this point to see a less than enthusiastic auction. Remember that 30 day/30 year spread that we discussed just about 24 hours ago? Yeah. That spread stood at +31 bps at that time. This morning? Just about 24 bps. That was quick.

Speaking of Tuesday. U.S. equity markets rallied, snapping a six day losing streak for the broader large cap indices. Something to write home about? Well, better than a sharp stick in the eye. That said, the rally was in my opinion largely technical, as these indices were short-term oversold. This condition provoked some short covering/profit taking. One technical issue that I see is what we in the industry refer to as an "Inside Day" for the S&P 500. What that means is that the day's high falls short of the high of the previous day, while the low bottoms above the low of the previous day. Take a look.

Markets generally do not turn on these kinds of days. There is no rule so to speak that I am aware of, but to me a condition such as this is often caused by the conditions mentioned above and then there is more times than not... a continuance of trend. A ray of hope? This condition does not exist for the Nasdaq Composite, suggesting that tech stocks in general, or software type names might have better staying power at this level.

As to volume behind Tuesday's action, yes trading volume declined from Monday. That said, there was considerably more action at both major exchanges than there was prior to last Wednesday. In addition, trading volume for both the S&P 500 and the Nasdaq Composite exceeded in each case, the 50 day simple moving average for a fifth consecutive day. Don't let someone who watches adolescents fall off of skateboards on the internet all day tell you that trading was light. It was not.

While each side in this trade war/currency war/cold war faces unique pressure, there is no doubt, you would think, that the U.S. might be able to sustain for longer a period of sub-optimal reality. After all, the Chinese economy now grows at the slowest pace in 27 years, and that's if one really trusts their data. The U.S. president faces the prospect of reelection (or not) in November of 2020. A deal must not only work in the long run, it must appear beneficial at the time of the agreement. The Chinese president prepares for the 70th anniversary of the Communist regime's victory over Nationalist forces in October. He must appear to be strong, and must appear to be in control. That makes the implementation of an increased regimen of tariffs by President Trump by a deadline of September 1st a sticky situation. White House Economic Adviser Larry Kudlow speaks of "planning for the Chinese team to come here in September." How much give do you think there will be in September with the Communist Party's big shindig planned for the very next month?

You know what provoked Monday's big selloff. The PBOC (China's central bank) allowed the yuan to fall to more than a 7 to 1 exchange rate versus the US dollar. You also know what caused short sellers to cover their positions on Tuesday. The PBOC stabilized that same yuan. Understand just how dangerous that is, and for the most part, the financial media missed it. The Chinese government ahead of these scheduled meetings, ahead of their own high level event and during (albeit early) a U.S. national campaign season, has now demonstrated an ability to control the S&P 500, even at the risk of Chinese domestic capital flight. This is not just flying a strategic bomber over an uninhabited island, or a Coast Guard cutter sailing through the Straight of Taiwan, this is a threat that must be countered in some way.

On Monday evening, PBOC Gov. Yi Gang said that recent moves in exchange rates will not impact the PBOC's commitment to "fundamental stability." Even if the Trump administration continues to insist on structural reforms made to the reality that is trading with and in China? Reforms that the Communist Party obviously feels would further damage that nation's economy as that economy struggles mightily?

The House of Mouse

What if I told you that the Walt Disney Company (DIS) could boast the best year at the box office in the history of film studios... or box offices? You'd probably want to see the rest of the earnings release, right? Uhm. Maybe not. For the firm's fiscal third quarter, Disney reported EPS of $1.35, badly missing expectations, on revenue of $20.24 billion, good enough for a quite robust year over year growth of 32.9%. Also, however... badly missing expectations. Net income from continuing operations dropped significantly, from $2.92 billion to $1.44 billion. So what happened? Is the underperformance explainable? Well, perhaps the firm should have warned. Perhaps the analyst community could have been more on the ball as well. The facts that the firm didn't and they weren't means that over the course of the day on Wednesday that a number of these analysts will likely bring down full year estimates. Therefore, even as shares have seemingly stabilized overnight down less than 4%, the volatility will extend throughout the session. Maybe even the week. Shareholders in this name, a group among whom I am a member, should brace themselves for now.

For the studios, the wild success of Disney Films such as "Avengers: Endgame" was offset by under-performance of the Fox studio that produced expensive flops such as "X-Men: Dark Phoenix." As for the parks, attendance was down, CEO Bob Iger feels possibly due to a fear of overcrowding as the new Star Wars attraction launched in Disneyland (Anaheim). Increased average ticket prices as well as higher prices for food, beverages, and merchandise saved the day in terms of revenue growth from that group. That Star Wars attraction is scheduled to launch later this month at Walt Disney World (Orlando). For the record, I have had family change plans to visit Disney in order to avoid being present shortly after that launch, so Iger might be onto something there.

Direct to Consumer remains the headline, even in the wake of disappointing earnings. The big talk here is the bundling of the now consolidated under one roof Hulu (28 million subscribers), and ESPN Plus (now 2.4 million subscribers) with the to be launched (on November 12th) Disney Plus. I think it quite obvious that there will be great demand among American families almost immediately for Disney Plus, and by extension the bundle package at a price of just $12.99 that undercuts pricing at streaming incumbent Netflix (NFLX) , while putting other players in the space such as Apple (AAPL) , Amazon (AMZN) , AT&T (T) , and CBS (CBS) at a competitive disadvantage. This bundled streaming package will for cord-cutters best replicate the television packages offered by cable service providers. 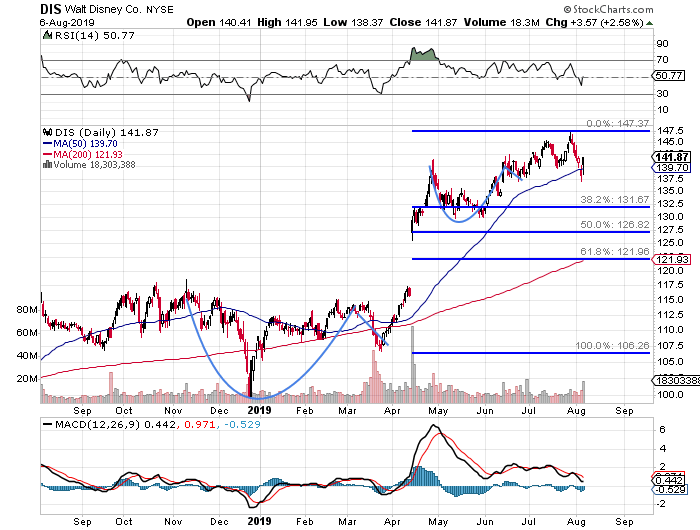 What now? Take a profit? Add? I'll tell you what. With the shares trading around $137 in the late overnight, that for me is not cheap enough to add, not do I feel compelled to sell the shares here. I do believe in the direction the firm has taken. I do believe that integration with Fox will present significantly reduced expense as synergies present, ans well within the two year window provided for by the company. While I am not sure that pricing the streaming business will provide much in the way of margin, certainly not what cable TV in it's prime could do, I am certain that this pricing will force competitors into similar situations possibly thinning the herd.

I am long DIS for the long-term. My target price had been $170. That's not realistic for now. My current panic point is $131, or a 38.2% retracement of the April through July rally. I'll add if one of these sleeping analysts forces the shares below $135.

Get an email alert each time I write an article for Real Money. Click the "+Follow" next to my byline to this article.
TAGS: Currencies | Investing | Markets | Options | Stocks | Technical Analysis | Trading | Media | China | Consumer Discretionary