Think of the happiest things

It's the same as having wings

Take the path that moonbeams make

If the moon is still awake

You'll see him wink his eye

The Yankees were off on Thursday. The Mets were rained out. The Rangers handled the Devils quite easily. What else are you going to do at 22:00 (10 pm) on a quiet night in New York? That's right. Watch China's National Bureau of Statistics release their key first quarter or February/March macroeconomic data-points. Remember China does not report February data due to the Lunar New Year, so data as of the end of March is a focus.

The numbers, officially reported in year over year format are eye-popping, as Q1 2020 you'll recall, was a lousy time for the Chinese economy. Official Q1 Chinese GDP hit the tape at growth of 18.3%, landing "precisely" upon expectation, but slightly below the 19% "whisper" number that had been thrown around by Asian economists this week. February/March Retail Sales were up a "mere" 34.2%, easily beating projections, while February/March Industrial Production hit the tape at growth of 14.1% y/y, which believe it or not, badly missed. Year to date Fixed Asset Investment up 25.6% actually fell short of projections, while a 5.3% Unemployment Rate was good for a beat.

I am not going to get into the eternal debate over the reliability over government released data from that corner of the world. I'll leave that to more learned individuals. I will point out that here in the U.S. we are less than two weeks out from the Bureau of Economic Analysis putting the advance (first) estimate of our own Q1 GDP to the tape. Now, here we do it quarter over quarter, then we seasonally adjust and annualize the number before it sees the light of day. You have heard official estimates for Q1 U.S. GDP that start around 6%, but most economists expect to see much more acceleration than that. Currently, the Atlanta Fed's GDPNow model which is more of a real-time (based on reported data when reported, not actually real-time) snapshot than a prediction, shows the U.S. economy growing 8.3% for the first quarter using that q/q "SAAR" (Seasonally adjusted, annualized rate) format. Yes, the Atlanta number was indeed revised to include Thursday's reports for March Retail Sales and Industrial Production. The number will again be revised later Friday for March results for Housing Starts.

My suggestion is this for all reporting agencies from wherever they report. We all know that Q1 2020 through Q4 2020 and beyond are badly skewed due to negative pandemic based impacts. Why don't we all, yes all of us... simply use 2019 as a base. Make the government (nationally or globally) agency release economic data-points comparable to the corresponding period in 2019. Of course this idea would exclude corporate reporting. You could either report the numbers straight, as in year/2019 instead of year over year, or you could still work your magic (two year totals annualized, but only seasonally adjusting using models that exclude 2020). Is this too hard for everyone to figure out? Or do we, as humans just believe that if we spend enough, and tell people how great things are often enough, that they will buy whatever it is that they are sold? Or told?

Let's Do Some Thinking

What do we know from Thursday? We know that the Census Bureau put a seasonally adjusted month over month March Retail Sales print of 9.8% growth through the hoop, or 8.4% ex-autos. "Outstanding" yelled the crowd. Away from that, April manufacturing surveys out of the New York and Philadelphia regions impressed, while Initial Jobless Claims finally lurched significantly lower. Back to those Retail Sales.

A number of components within the report posted almost incredible growth of their own, led by "Sporting Goods, Hobby, Musical Instruments, & Book Stores." That single component showed m/m growth of 23.5%. Just an aside here... I used to call this component the fun index, but in reality... do you think we as a nation sold more musical instruments, more books, or more guns? Just wondering.

Facts are facts, the fact is that although the government rained down a rough $350 billion in "Biden Bucks" (of $1400 per individual) on American households in March (I am not even including the "Trump dump" - of $600 per - that preceded those March payments), that really despite the gaudy retail sales print, these retail sales only grew by a rough $55 billion. So, what happened to the rest of that helicopter drop of some $295 billion?

What, away from all of the victory laps being run by traders and investment bankers, have the banks, in general, told us this week? They have told us that demand for credit waned a bit, correct? So, households and small businesses aided by helicopter money, with still more than 3.7 million individuals reliant upon state level unemployment benefits with a federal stipend on top, did not try to borrow money.

They instead saved, invested, and paid down debt. Hmm. So, helicopter money pads economic growth (but not organic economic growth), while reducing private demand for credit. This my friends, suppresses velocity, or the speed (turnover) of transaction. This newly created fiat, if it remains confined to balance sheets as reserves does nothing (not a darned thing) to drive higher consumer level inflation beyond what would be considered "transitory."

Wait. You mean to tell me that Fed Chair Jerome Powell has been right all along? Hey, I am an economist. I have two hands, sometimes more. The fact is that he and his crew see this. They see it before we do, and this is why their case has merit. This is why "they" have not yet collectively changed their tune. What I am saying is that the "transitory" narrative remains in place until it does not. The "organic" economy has to take over at some point, and at that point, at least in theory... demand for credit should accelerate. Why do you think monetary policy was such a colossal failure from the end of the Great Financial Crisis on? The fiat remained in place on balance sheets. Simple is as simple does. Velocity is everything. Money Supply means nothing unless someone tries to use it. It does, however, set the table.

I have a question. Why did the long end of the Treasury Curve rally so hard on Thursday, if the macro was so hot and GDP expectations gapped higher? Good question. There are a few factors at work here that you probably need to understand and the demand for the US Ten Year Note in particular that took that one yield from 1.63% early on Thursday down below 1.54% at the low, badly flattened the entire yield curve. Remember, there is no "robust" economic growth, nor can there be above trend inflation without a healthy yield curve. That's just a fact.

Now does a lack of demand for credit result in lower prices for borrowers? That could be a factor, but that would have been more visible for the entire year to date, and yields really only turned a corner two weeks ago. Short squeeze? Probably something to that, but not the driver.

I have covered the U.S. Treasury Department's April auctions fairly closely in this column. Anyone remember what we saw? Yes, you in the back. Excellent... correct, improved bid to cover, and improved demand from Indirect Bidders... or foreign accounts. Very good. You paid attention. Government data out of Japan shows Japanese investors snapping up almost $16 billion worth of foreign sovereign debt since November. I am not saying that yesterday's demand came out of Japan, but Japanese banks do finalize their investment year at the end of March.

The demand that has worked toward flattening the U.S. yield curve since April 1, and most especially on Thursday, was probably foreign, and a more than educated guess would in national terms identify origin. Is this sustainable? Not at that pace. The US Ten Year already gave up about 1.58% early on Friday morning. The vast spread (between here and there) in nominal rates must be maintained for foreign funds to keep flowing in. In other words, the Fed just has to keep the short end pinned, and let the long end dangle as long as it does not move too much. They (the Fed), and I know this idea is way out of the box... but the FOMC may even want to think about selling the long end as long (yes, outright in secondary markets) as someone else is buying in order to lay off some credit risk. Duh! Then again, the FOMC would need actual traders who think in real-time on the payroll. Good luck with that.

You ran into the economist this morning. For that, I apologize. Many readers probably came here expecting to speak with the trader. It could have been worse. You could have run into the kid from Queens, the hockey player, or the Marine infantry NCO. An eclectic collection of semi-lunatics, that crowd. What's that? Okay, okay... I'll tell them.

The man in the darkened window wants me me to tell you as he fades into dawn, that he really likes the Walmart (WMT) involvement along with Microsoft (MSFT) , Honda Motor (HMC) in General Motors (GM) subsidiary "Cruise" as they work toward a pilot program developing these autonomous vehicles in Scottsdale, Arizona. Walmart is more of a player in these types of development programs than you think. Walmart operates an incredible fleet of transportation and delivery vehicles that has to compete with Amazon (AMZN) . Walmart is also working with Ford (F) and the Waymo subsidiary of Alphabet (GOOGL) . They can not screw this up. 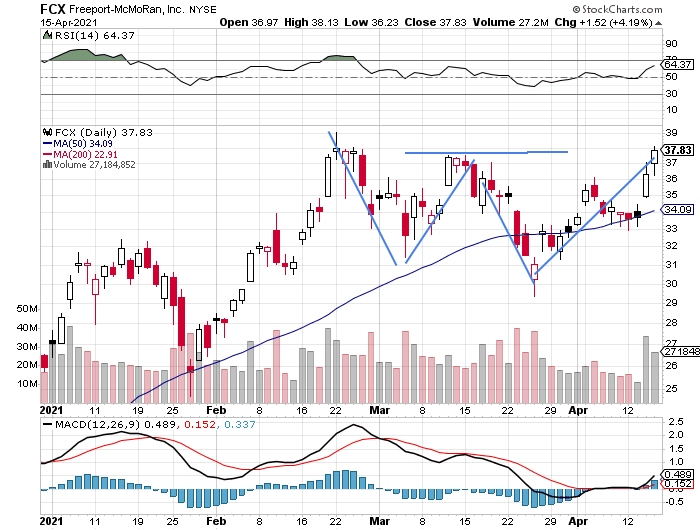 Freeport-McMoRan (FCX) appears to be currently breaking out of a double bottom pattern with a $37.50-ish pivot. Relative strength and the daily MACD are both in good shape as the U.S. dollar has shown recent weakness. Should FCX hold pivot, target price moves to $45,and the panic up to $33. That is all.

Get an email alert each time I write an article for Real Money. Click the "+Follow" next to my byline to this article.
TAGS: Economic Data | Federal Reserve | Investing | Markets | Politics | Stocks | Technical Analysis | Trading | Treasury Bonds | China