Any Time? It's the time of the season. You already know your name. You may know where you are from. Personal history can help root one's ability in decision making, though does not necessarily ensure better outcomes. You have been here all along. You know what you need to live. The obvious. Water. Oxygen. Nourishment. For the body. The mind. The spirit. Maybe you can live fine feeding just one of two. I can not. I must nurture all three in order to continue to evolve. Or, perhaps it is enough to understand that one is not perfect, as long as one commits to the eternal pursuit of such perfection.

The enemy? Singular? Really? Understand this. Your enemies are many. Sloth, both physical and intellectual. Personal bias. Areas of ignorance. Yes, my friends, we very likely do have external enemies, but for the most part, the ones that hold us back are of our own creation. As we make correction here, or there, these conditions will adjust in countless ways in order to splinter honest personal assessment. Hence, why the first rule that I have given you in overcoming all obstacles is simply to understand. One may not identify areas of strength and potential avenues of attack if one can not understand. One can not adapt if one can not identify the threat. No one ever born has been able to adapt if one can not identify what is important. One will never, ever overcome if one can not adapt. One must overcome.

Take my hand. Go ahead. I will not move faster than you are able. I will watch your back while you sleep. Together, we will not fear. No. Not us. Not ever. We are. Undefeated. Still.

The Reaper can go scratch. Markets rallied fairly hard on Tuesday off of terribly oversold conditions. Certain technologies outperformed Small Caps. Small Caps outperformed the broader market, and likely will continue to do so, as the U.S. dollar remains strong versus other reserve currencies. When does that change? Can't rush these things, gang. Let markets come to us. Let markets mold our behavior. In my experience, forcing my wishes and expectations upon the marketplace has never worked out very well.

The environment provided. That's what must be understood in order to move on. So let's slow this whole ball of wax down, and understand then. I have mentioned often the likelihood of an emerging "Cold War" with China. Could be a while. Could be quick. I doubt that. Investors must understand that probably the most important single item relative to the U.S. political cycle is the economy. The economy molds our decision making. Not so, for our adversaries in this trade conflict. The focus for the Chinese government is the maintenance of power. The economy, in my opinion would be sacrificed if it meant a less authoritative role for the Communist Party.

So, China retaliates to what is really just a U.S. response to decades of improper behavior in trade as well as matters of national security. The U.S. can place tariffs on an additional $300 billion worth of Chinese exports. China can not match this. China is almost out of ammo in the trade war. To us, that might look like we are close to a solution. Don't bet on it.

Last night, the Chinese National Bureau of Statistics reported a long series of economic data for April. Remember the burst of activity that China enjoyed in response to ramped up stimulus around the Lunar New Year? Yeah, that's toast. In April, the Chinese economy experienced a dramatic, and much worse than anticipated slowdown in the pace of growth for both Industrial Production and Retail Sales. Fixed Asset Investment also suffered badly.

Assuming that the Chinese side is backing away from expected concessions, while likely already knowing that their own economy was once again showing signs of weakness, is telling. This shows a clear prioritization in my opinion of power and control over prosperity. The president of the Untied States is not wrong to take this seriously. While tensions over both trade and national security will now intensify, U.S. multinational corporations that have been slow to adjust supply lines must now play catch up. Should China not concede in areas such as intellectual property theft, then their intention to compete strategically must be understood.

For those about to ask, the symbol for the Van Eck Vietnam ETF is (VNM) . The fund has not performed well as for months, it seems that the U.S. and China were close to a group hug. Mired in a period of consolidation, the fund recently did find support at the 200 day SMA. Do I think this is a good investment? I don't know. This may just be a place to stash some "just in case" money. If I had something to manufacture in mass cheaply and to try to sell to 325 million American consumers, this is where I'd be kicking rocks. Oh, Lockheed Martin (LMT) and Kratos Defense (KTOS) . Fighter aircraft and military drones. Yeah, those.

Nothing but dirt. Deep enough for two guys. Two grenade sumps. Hope we don't need those. Deer urine to mask our scent. Eat? Maybe. Painted face, painted hands, ears, teeth. Covered in vegetation. Listen. Just listen. Do you hear that? What? That !!

Increased tariffs could create a condition of artificial scarcity in the U.S. economy. That would shock supply lines, and would result in heightened consumer level inflation. What about the Fed? The Fed is, and should stand pat. Futures markets are pricing in a 10% probability of a short term rate cut in June, and a 72% chance of a rate cut this year, not to mention a 31% chance of multiple rate cuts.

Dollar strength for now has kept inflation in line. Core CPI (Forget this PCE nonsense) has recently found support at 2% and has remained above the Fed's target since early 2018. My opinion is that the central bank may be forced to pivot in either direction and is correct in their current state of inertia. I throw no stones at this time.

What's that? What? Something else. Bitcoin. Over $8K, while the yuan declines to a mere 6.83 to the U.S. dollar? Hmm. Beijing trying to publish levels for the yuan above where the actual trades are taking place? Sound like President Xi may have a brewing capital flight problem on his hands. Told you Bitcoin (or any crypto really), while not truly a currency, might find a purpose. I was just thinking more like Venezuela when I wrote that.

The fish that got away? Or have you taken profits too early, and still watch as if a jilted lover? That's me. I want Disney (DIS) back, but I'm selfish. I want Disney at a bargain, because... well, that's what I do for a living. I see that Disney's ESPN has partnered with Caesars Entertainment (CZR) to develop shows for sports betting. The deal includes the building of a studio for these programs at The LINQ hotel and casino in Las Vegas.

I also see that Disney will assume complete control over Hulu, as Comcast (CMCSA) has agreed to sell the remaining non-Disney stake in that streaming service at some point over the next five years for either $27.5 billion or whatever 30% of Hulu is appraised for at that time. NBC programming will remain available at Hulu, even as NBC preps their own competitor to Disney Plus, Netflix (NFLX) , Amazon (AMZN) Prime, and Apple (AAPL) for a possible launch by spring of 2020. 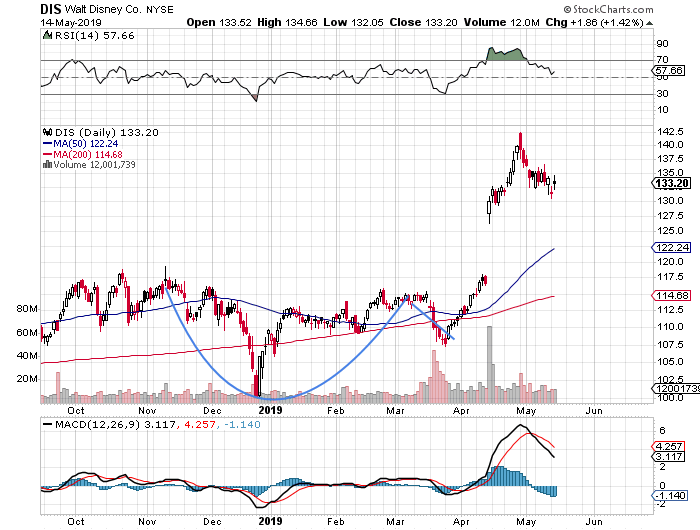 What we see here, is that the pop afforded by the break-out the name enjoyed in response to the Disney investor day news (or as a result of that cup with handle for the technical traders) reached and surpassed the $140 price target that we had written to you about in April. Hey, I'm the moron who did not even wait for his own price target (I could have had a V-8).

So, we'll leave the price target in place given that the stock is well off of the highs. Does that gap still need to fill? If it does, I know that I want to buy some, and re-establish my long position. How about the 50 day ($122.24) and 200 day ($114.68) SMA's. I could target those spots for support on weakness? So, if I am going to wait for my pitch, I am going to get paid to do it. Here's my plan. Disney reports again in early August.

Getting Paid To Wait (in minimal lots)

What happens now, is I get paid $3.44 ($344) in premiums to hang out and wait. If the shares go higher, I never end up with an equity stake, but I do take my wife out for a nice steak dinner. Maybe twice.

Can you lose money? Sure. Right now I am baby sitting a long position in Intel (INTC) that I ended up nursing due to my method. Still better that buying a name at the top, if one is so inclined.

Get an email alert each time I write an article for Real Money. Click the "+Follow" next to my byline to this article.
TAGS: Economic Data | Economy | Investing | Markets | Options | Stocks | Technical Analysis | Trading | China