To Be a Rock

You did not roll? None of us did. We did at least listen very hard. I thought for a moment, maybe two that I might have heard the piper calling us to join him. Truth is that I have been nearly deaf for a long time. There was no piper, nor rock, nor roll. It is said that there was however... more progress. Makes me wonder. Wonder when. Wonder if. Equity markets have sustained broadly elevated price levels now for most of the week. A trade deal with China, or at least the summit where that gets done was imminent. They said. President Trump met with Chinese Vice Premier Liu He. Birds sang their joyful song from some distant perch.

No dice, or should I say "no deal." Just yet, which is probably a short-term market positive. The two sides know that. Why bring forth the end of optimism? Anticipation. The two sides will meet again on Friday (today). The U.S. president was certainly optimistic. "It's the granddaddy of them all (not the Rose Bowl). It has a good chance of happening." Almost all onlookers agree that most of a deal has been agreed to. The president threw "four weeks" around as a potential timeline. That would push the unscheduled summit between the two heads of state (Presidents Trump and Xi) out into May at the earliest.

My office is nowhere near Washington, and even further from Beijing, From my view, though... it would seem that China has likely agreed to purchase mass quantities of U.S. goods to help close the trade gap between the two nations. That's at least what the action in Boeing (BA) seemed to tell me. Squeeze please. The news regarding that name appeared to be negative in nature, yet the name soared. Perhaps there might be some broad speculation that somebody big may soon be purchasing a plethora of aircraft. Other issues necessary to agree to a deal from the U.S. side are well known. U.S. corporate intellectual property rights must be protected. The practice of forcing transfers of technology as the price of market entry must stop. There must be a clear and verifiable method of enforcing compliance.

The feeling is as it was. President Trump wants to draw down tariffs slowly as perhaps a reward that the Chinese side might reach for as they live up to commitments made. The Chinese side would obviously like these tariffs dropped immediately upon reaching such an agreement. The U.S. has asked that the Chinese not retaliate should the U.S. feel forced to act punitively in the case of a future violation. The Chinese are probably insisting that this line item be a two way street. Personally, I think this part to be pure nonsense, as both parties will obviously retaliate in the case of perceived slight. Face must be saved. Progress? Cold War.

As if the surveys released each month by the BLS (Bureau of Labor Statistics) were not focused upon enough, now comes the March data. Why so key? For one, the weakness seen in the February print for Non-Farm Payrolls. Will the 20K (seasonally adjusted) jobs added in February be revised higher? Many folks I speak to are looking for this in addition to the 175K new jobs for March that seems to be consensus expectation.

Now, stay with me. On Wednesday, ADP reported 129K new private sector jobs, which was below what had been expected. However, ADP reported 197K such jobs in February, and the three month moving average is running at 209K. Remember this... ADP is a private business. Their results are the product of hard data, and considered by trader/economists like myself to be more reliable then the BLS surveys as the household and establishment surveys themselves often vary wildly for the same month. For instance, in February, the establishment survey (The official NFP) was that 20K print for job creation that we have been discussing. The household survey for February showed 255K newly employed hires. How can that be? Well, obviously at least one of them is not accurate.

I have found that while month to month the BLS and ADP numbers often gyrate away from each other wildly, however, on a longer timeline, the averages for both of these series tends to gravitate toward each other. For the two to converge on a three month timeline, barring a revision (unlikely), the non-farm payroll number has to print at 295K on Friday (this) morning. Not very probable.

As a better gauge of demand for labor, watch the print for year over year hourly wage growth crossed against average hours worked. For February, the wage growth number surprised to the upside at 3.4%, but the positive impact of that number was indeed muted by a cut in the average workweek to 34.4 hours from 34.5 hours.

Forget the headline unemployment rate. That's a simple tool that no longer (if it ever did) accurately measures labor market conditions. What we need to see, if we are rooting for the American worker is a sustained 3.4% wage growth, while the participation rate holds at 63.2% and the average workweek increases back to 34.5 hours. That would be a home run regardless of payroll data.

As for monetary reaction, fear not. It would be beyond comprehension for the central bank to turn on a dime, again... especially after forcing an inversion of the 3 month/10 year Treasury yield curve that has only now started to relax a bit. Think about it. Would you raise the Fed Funds Rate 25 basis points with the 3 mo/10 yr spread at 10 bps, with the 2 yr/10 yr spread at just 17 bps. Can you think of anything more reckless? Futures trading in Chicago are pricing in a nearly 50/50 shot at a rate cut this year, and no probability at all of a rate increase, for your information. Herman Cain, Stephen Moore... hurry !! The academics are thinking again.

It appears that the Saudis are making some noise regarding the selling of crude in currencies other than the U.S. dollar should congress take action that exposes members of the OPEC cartel to U.S. anti-trust lawsuits. I am sure that both Russia and China would back the Saudis in a heartbeat in the case of such an event.

The facts are the facts though. Congress would not likely pass such as bill as the idea has been banging around the halls of Washington for nearly 20 years, and OPEC is far less powerful relative to the U.S. in global oil markets than the cartel was at that time. Congress also likely understands the necessity of retaining the dollar as the planet's preferred reserve currency. Still, wouldn't hurt to see the green back wobble a little.

Out of the cloud, into Retail? Did I just write that? As I tuned into Mad Money last night, it did my brain some good to see that Jim Cramer had turned over every stone trying to figure out just what happened across the software space on Thursday. I had not found anything substantive out either. I did add to some of my cloud longs however. Even above net basis, which I don't like to do, but when something you like is on sale... you know the rest.

So, who am I still on board with? Try Amazon (AMZN) , Microsoft (MSFT) Salesforce (CRM) , Adobe (ADBE) , ServiceNow (NOW) , and Zuora (ZUO) . Don't forget about Zuora. The recent trading range since the earnings related selloff, has simply been a gift.

Now for retail. I noticed weeds in my yard this week. What did I do? Home Depot (HD) . That's right. I am already there though. I am flat Lowe's (LOW) , and that name is at a technical pivot. 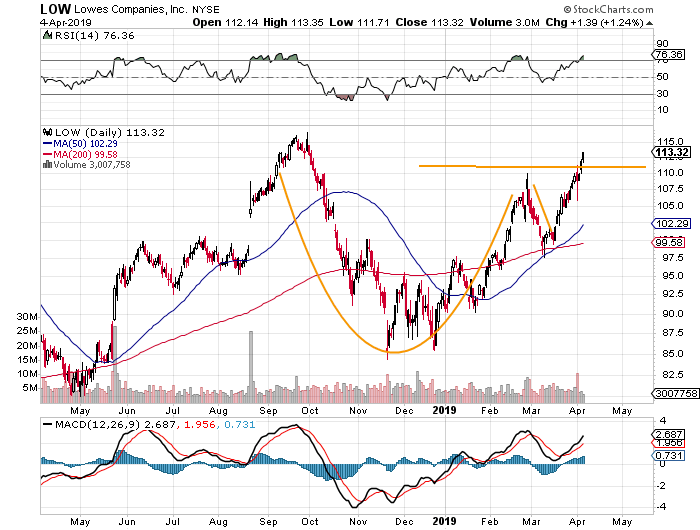 I am likely entering this name today a entry level size. The plan? To sell it to you at $125 by autumn. Rock on.

Other Economics (All Times Eastern):

Get an email alert each time I write an article for Real Money. Click the "+Follow" next to my byline to this article.
TAGS: Economic Data | Economy | Investing | Markets | Options | Stocks | Technical Analysis | Trading | China | Market Recon