Ever been to a Kiss show? Maybe you're a fan. Maybe you're not. Plenty of folks scoff at the music, and scoff at the gimmicky marketing. I have caught the band too many times to count. A fan since I first heard that music in my friend's basement on that day in 1974. There are a few songs nearly as old as the band itself that Kiss will play at some point in each and every live show. More often than not, as I have aged from pre-adolescent to post-middle aged, this band has opened with "Detroit Rock City." It's at that moment that even the peripheral fans think to themselves... "Oh yeah, I know that one."

It was a wondrous event. More so than folks might think. Reports circulated on Wednesday that any "Phase One" trade deal that would be agreed to and signed by Presidents Trump and Xi of the U.S. and China would now be delayed into December. Maybe beyond that. Keyword reading algorithms kicked in. It appeared that a selloff was now underway. Soon the momentum bots would also trigger and one might expect markets to overreact. Only they didn't.

The initial downward pressure was indeed there. This time, the human element kicked in, not the momentum bots. Call it a rare victory for those sporting the ability to reason. It's why we stopped climbing trees. Bipedal creatures rule.

WTI Crude sold off, but not so sharply, and for a good reason. Sure, they bought the long end of the Treasury curve, but spreads generally remained healthier than not. The CBOE Put/Call ratio not only remained below 1.0 for a third consecutive day, but below that ratio's 200 day SMA (0.96) for a third straight day as well. Trading volume for equities were indeed elevated across exchanges and across indices. Algos crashed into buyers as traders heard the news of this "trade deal delay", and many of them thought to themselves... "Hey, I know this one."

As if fired out of a cannon, S&P futures roared significantly to the upside around 02:15 am ET on Thursday morning. This is why we set alarms and leave radios on all night. Up and at 'em. Rock and roll. I'll never ask you to be smart. You can't control that. I will always ask of you a relentless effort in pursuit of victory, a high level of motivation, and endless dedication to purpose. Everyone can do that. You can do that. We all have two types of problems. The ones we have already figured out, and the ones we're still working on. There is no "I can't" in our world. So don't ever say it. Not ever. Glass half full. For life.

Back to the story... heard it on the radio. Then it was on some websites. Within a short while the story was posted at the South China Morning Post (Hong Kong-based English language newspaper owned by Alibaba (BABA) . Chinese Ministry of Commerce spokesperson Gao Feng spoke: "In the past two weeks, top negotiators have had serious and constructive discussions on resolving issues of core concern. Both sides agreed to remove the additional tariffs imposed in phases as progress is made on the agreement.

A short while after that, Chinese state run news agency Xinhua reported that China was considering removing restrictions on imports of U.S. poultry. As neither president appears quite ready to meet, both sides repeatedly send positive signals meant to keep that above mentioned glass "half full." It might be interesting to note that the U.S. Treasury Department collected an all-time record $7 billion in trade tariffs for the month of September, up 9% month over month and 59% year over year, as that September 1st tranche of 15% tariffs on more than $110 billion in Chinese imports went into effect.

While it is true that tariffs are assessed directly to importers, and not to the Chinese government, nor Chinese exporters, this does increase pressure on the Trump administration from the business community going into an electoral season. As for pressure on the Chinese side, I think a September 17.8% decline in exports to the U.S. compounded on top of a 22% decline in August speaks for itself. The Chinese economy needs it's best customers to be in the game. Chinese GDP is clearly trending with the Chinese government (CFLP) Manufacturing PMI. That survey has printed in a state of outright contraction for every single month since April. Ouch.

My guess is that most of the mainstream financial media will not be "on the ball" enough to pick up on the story. In what might be seen as a fairly significant concession to President Trump, who has made the flow of Chinese manufactured fentanyl into the U.S. a trade issue, a Chinese court in the city of Xingtai sentenced nine individuals in the wake of a successful prosecution of fentanyl traffickers. Why is this a big deal? Simply because this trial was a result of cooperation between U.S. and Chinese law enforcement agencies and Chinese officials made sure that foreign media were invited to the sentencing as a show of faith toward Washington.

(For more on the China trade talks, see what Jim Cramer has to say, here.)

Among those nine individuals, there was one suspended death sentence, two life sentences, and six sentences ranging from six months in prison to 10 years. The drug, considered up to 50 times more powerful than heroin is believed in large part to originate on foreign soil (mostly China), and then is smuggled across the U.S. border with Mexico. Previously, the Chinese government had regularly rejected the idea that fentanyl sold within the U.S. had Chinese origins. That's why this is key. It's also one reason why improving border security is so very important.

I read with amusement an article in the Financial Times on Wednesday evening. Apparently there is pressure on the London Stock Exchange and other European trading venues to shorten their hours of operation. The reason? To improve liquidity and improve workers' mental health. London markets are active from 8 am through 4:30 pm, which is longer than in the U.S.

The article points to regular hours at the New York Stock Exchange and the Nasdaq Market Site (9:30 am through 4 pm) as an example, but I must point out a key misunderstanding here. I have been in this business a very long time. Even prior to the invention of the internet, traders were present at their place of business very early... 6 am to 7 am at the latest, often earlier. The trading may have stopped at 4 pm, but the paperwork did not until close to 6 pm. Traders worked 12 hours a day prior to the invention of the internet, and those hours have grown exponentially ever since.

In the year 2019, volume still aggregates around opening and closing auctions at the two main exchanges, but does anyone wait until 9:30 am to trade? Or stop at 4 pm? Not in 2019 they don't. I usually start my day at 3:30 am. Today was considerably earlier. I executed my last trade at 7:59 pm last night on Arca. Grabbed some Roku (ROKU) in the $119's. We'll see how that goes. In addition, preparation for one's daily work has evolved over time. Worked on charts and balance sheets until close to 10 pm. Even if I get out on a run, or go lift weights, it's not Iron Maiden plugged in to my earbuds, it's business talk.

There was a time in the 1980's when I would have a crowd around my booth at the NYSE at 8:30 am because I was one of the few on the floor that knew what numbers were coming out and what the street was looking for. Now, everyone knows these things. The internet did that as well.

I am not complaining. I'm still around. The fact is that the industry is far smaller than it was prior to all of technology's advances. Less people are now capable of much more. The mental stress is going nowhere if regular hours are shortened. The real stress comes when they just don't need you anymore. The game at hand is survival. The only way to do that is to compete. If the computers don't need to sleep, neither do I. Rock on.

I came into Wednesday night hoping to get long either some DexCom (DXCM) , or some Roku on an earnings related dip should the powers that be grant me my wish. They both reported great quarters. DexCom is off to the races, so see ya! Maybe next time. Roku even with awesome looking quarterly metrics, still closed last night trading at 19 times sales, not earnings. The numbers grow like a weed in every area except profitability. Yes, the analysts will likely pile on today. Good for them.

As Apple (AAPL) TV Plus and Disney (DIS) Plus join the fray, I've got to think this platform either fizzles and goes away, sells itself, or becomes a magnet for advertisement dollars currently being spent on broadcast. We'll see. 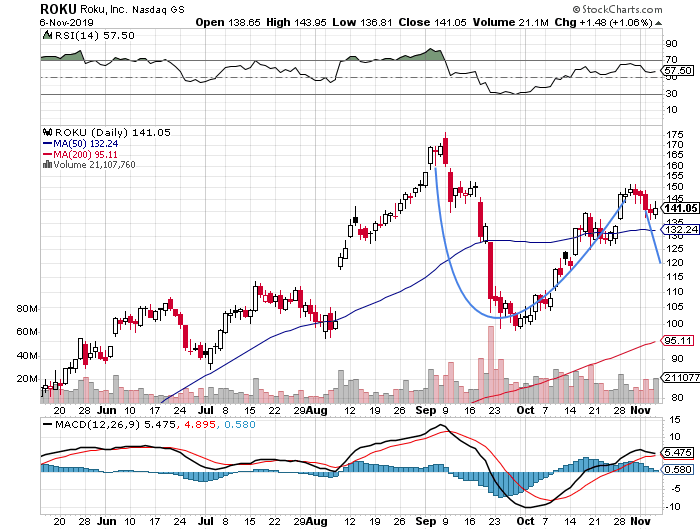 I look for Thursday's lower open to provide a handle to this cup pattern, that will ultimately lead to a filling of the gap created. Target price? Not yet, but it's going to be a lot higher than the pivot of $151 that I hope is eventually created.

(Apple, Disney and Activision Blizzard are holdings in Jim Cramer's Action Alerts PLUS member club. Want to be alerted before Jim Cramer buys or sells these stocks? Learn more now.)

Get an email alert each time I write an article for Real Money. Click the "+Follow" next to my byline to this article.
TAGS: Investing | Markets | Politics | Stocks | Technical Analysis | Trading | China