There is a risk-off sentiment permeating the globe on Monday morning as social unrest spreads across Mainland China in response to Beijing's continued zero-Covid policies as new infections mount. Protests, already underway as the Chinese public has become increasingly impatient with policies that have failed to curb the virus while causing great economic and social disruption, ramped up significantly over the weekend.

This came after news of a fire last Thursday that killed 10 people under lockdown in the Xinjiang region spread across the nation on social media. By Sunday night, protests in Shanghai, a city that was locked down for two months this past spring, and many other Chinese cities had escalated to the point that police had difficulty trying to disperse the crowds.

Readers must keep in mind that under President Xi's authority, frequent lockdowns have been the government's main approach toward managing the Covid pandemic. The government had given thought toward taking moderate steps toward a more open economy, but has stepped back into these zero tolerance policies since infections started to surge again this autumn.

Even the seat of government in Beijing as well as other large cities are experiencing broad showings of public discontent with continued draconian policies.

As for global markets, the continuance of a suppressed Chinese economy means slower global growth, expressed in terms of reduced commodity prices. This is reinforcing overall risk-off behavior overnight, as Asian, and European equities as well as US equity index futures trade lower. There is however, demand for US Treasury securities.

Communist China remains the only nation on earth refusing to learn to live with the virus in the age of Covid, choosing mass, enforced lockdowns as a means of preventing infection and severe viral outcomes rather than to simply import far more effective and readily available vaccines than the ones that had been used there. That is unfortunate for the Chinese people.

As that economy continues to struggle due to said suppression, the PBOC (People's Bank of China), which is the Chinese central bank, will cut the RRR (reserve ratio requirement) by 25 basis points effective December 5th. The cut was announced last Friday, and will be the first such loosening of economic policy in China since this past April.

The idea is to inject an additional $70B of liquidity into the economy provided someone somewhere actually wants to borrow it. Beijing had also recently - two weeks ago - launched a rescue package targeting its beleaguered real estate market.

Obviously there was less fat on the bone last week, due to the fact that Fed speakers, and government agencies that track macroeconomic data really only put in only a three day workweek. The investing public may have put in a fourth day in five on Friday, but that day was just a half-day and many decision makers did take the day.

I remember a time when the decision makers used to work that half-day Friday so that their employees could take the day. That's how old I am. For the most part, the week was positive for equities, but not overwhelmingly so.

The week started out with major news and a strong showing by The Walt Disney Company (DIS) in response to last weekend's news that CEO Bob Chapek had stepped down from that position immediately and had been replaced by Bob Iger, who was Chapek's predecessor. The House of Mouse (love saying that) would hang on to those Monday gains for the balance of the holiday week.

As traders made their way towards Black Friday and the day's associated discount shopping, those traders would have to meander their way through some tech sector layoffs and the FOMC Minutes of the November 2nd policy meeting.

Those Minutes were released last Wednesday afternoon, after a literal plethora of macro-economic data-points had been released earlier in the day. The results for the day's numbers were truly mixed. There was some good, which is bad, in a monetary policy sort of way. October Durable Goods Orders (and Core Capital Goods Orders) were strong as were October New Home Sales.

However, weekly data for Initial and Continuing jobless claims painted the picture of a labor market starting to truly show some signs of deterioration. On top of that, S&P Global November Flash PMIs for both the US Manufacturing and Services sectors printed in a deep state of contraction. Those numbers simply screamed "recession."

As for those FOMC Minutes, there appeared to be a consensus among committee members that it may be necessary for the Fed Funds Rate to ultimately apex at a higher (terminal) level. There also appeared to be a consensus that it made sense for the Fed to slow the pace of their upward pressure on the short end of the yield curve and allow the real economy to do some catching up. This way, some kind of an assessment might be made judging policy versus the damage done.

One, though I think the Fed should pause, there is at least some reason behind this approach. That's a big step for this crew. Two, that is exactly what Fed Chair Jerome Powell told us in the November 2nd press conference.

I have reminded readers for a few weeks in a row now, and I think it important enough to keep it top of mind. Yes, markets are a bit soft this morning. The week ahead remains uncertain. We remind readers that the "tradeable" bottom that occurred on October 13th (reversal of trend) and had been confirmed (by volume) on October 21st is still very much intact, especially after the reconfirmation of November 10th.

That does not change until the trend truly changes again. As of right now, even amid this Chinese-inspired global Monday morning selloff... the trend is higher. Only once we see a reversal that is then confirmed the way it was to the upside, will this be "just a bear market rally." Until then, it's a "seasonal" rally.

The S&P 500 managed a gain of 1.53% last week. The Nasdaq Composite, which is heavily exposed to tech, ended up 0.72% for the week. The Russell 2000 gained 1.05% for the week, and the Philadelphia Semiconductor Index, which we always keep an eye on as this group has been the engine of both the economy and the markets, tumbled 1.26% on Friday, but still gained 1% for the week.

All 11 sector-select SPDR ETFs ended in the green for the week. Performance near the top of the week's performance tables was well spread across defensive and cyclical sectors with Utilities (XLU) on top and Materials (XLB) close behind. Both of those sectors gained a rough 3% over the three and a half sessions for the week. Energy (XLE) finished in last place, but still showed a gain for the period. Both "growth" sectors finished in the bottom four weekly places. 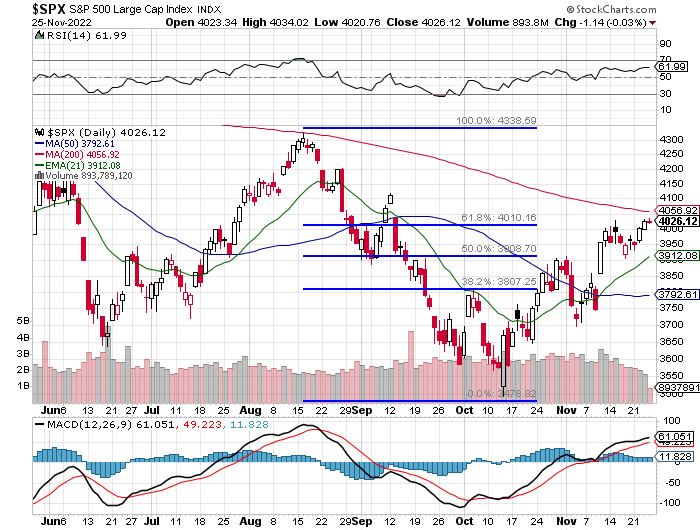 On the daily chart, the S&P 500 continues to work toward its 200 day SMA with both its relative strength and MACD in good shape. One can not yet say that the 61.8% Fibonacci retracement level of the August through October selloff has been taken and held. 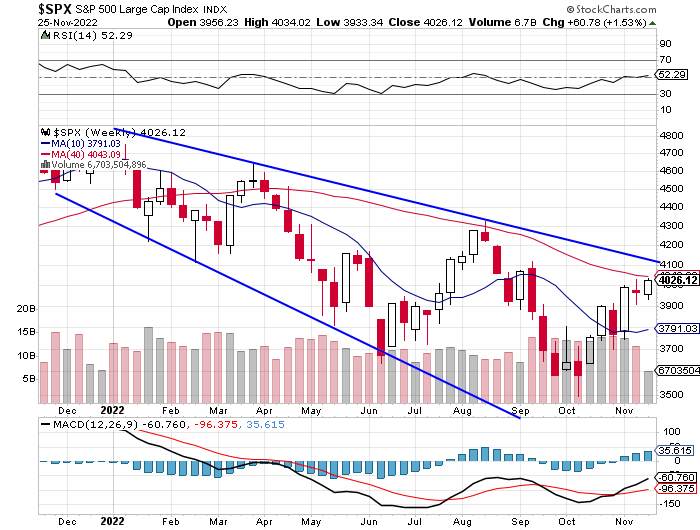 On the weekly, the MACD is strong, but relative strength is just not where it is on the daily. The index met resistance last week at its 40 week SMA. A take and hold of that line would allow for a potential breakout from this almost year long "descending broadening wedge" pattern, which is considered to be a pattern of reversal.

This week will be the first of what will be three consecutive five day workweeks. Despite a slow earnings calendar, this week looks to potentially be quite active. A number of Fed speakers will crawl out of their respective cages and probably opine publicly on such topics as inflation, economic growth and policy.

First and foremost among them will be Fed Chair Jerome Powell, who will speak at the Brookings Institute on Wednesday afternoon. The Fed's Beige Book will also be released that afternoon. That would make Wednesday the most important day of the week... most weeks. It still might, but there will certainly be more wood to cut once we reach Wednesday night.

From a macroeconomic perspective, this is "Jobs Week." The BLS will publish November's labor market-related survey data this Friday. Perhaps equally focused upon will be November Personal Income and Spending as well as November PCE year over year inflation, both at the headline and at the the core.

All of that data will be released by the BEA on Thursday. Investors need to be fully cognizant that Amazon's (AMZN) AWS re: Invent 2022 event will run all week starting today from Las Vegas.

At last glance, this morning... futures markets trading in Chicago were pricing in a 70% probability for a 50 basis point increase to be made to the target range for the Fed Funds Rate on December 14th, with a 65% probability for at least another 50 bps rate hike on February 1st, 2023. Those same futures markets are currently pricing in a terminal rate of 5% to 5.25% that will not be reached until May and will then stick through July. An interest rate cut is now priced in for September 2023.

As for individual companies reporting this week, there are still a few notables. Such names as CrowdStrike (CRWD) , Workday (WDAY) , Salesforce (CRM) , Snowflake (SNOW) , Kroger (KR) , Marvell Technology (MRVL) , Ulta Beauty (ULTA) , and Zscaler (ZS) will report throughout the week.

(XLE and Amazon are holdings in the Action Alerts PLUS member club. Want to be alerted before AAP buys or sells these stocks? Learn more now.)