It was the kind of action that could easily be missed. At first. If traders took their eyes off off their screens just a few minutes before 1 pm ET on Wednesday, and then looked back...surely they did something of a double take. The major indices did the swan dive on simply wild trading volume. Ever see the king of monsters, Godzilla rise from the sea just before trashing most of Tokyo? Exactly. Just like that.

News had broken. Reuters had published a piece suggesting that any completion of a "Phase One" trade deal between the U.S. and China could slide into next year. The article really brought up no new issues, China pressing for an extensive rollback in tariffs, the U.S. demanding more of China, but financial markets were in a fragile position, having priced in perhaps more optimism that was indeed warranted.

So, it would be that the entire market would end up doing the Fandango. Traders bought up the bond proxies such as Utilities, REITs and Staples, not to mention bonds themselves. Thursday evening, the U.S. 10 year topped out at a yield of little more than 1.71%. For the most part, traders tossed out sectors reliant upon global growth such as Industrials, and Materials, as well as the semiconductor/hardware side of the Tech sector. Energy, however, did its own thing. WTI Crude rebounded on a lighter than expected inventory build despite a U.S. dollar bill, y'all that strengthened versus its peers as the day dragged on.

The bottom line (or is it?) would be that equity markets in general, sold off on high volume. Volume at the exchanges exploded. Volume attributable to the broader indices landed well above moving averages. Breadth (not breath, though that may be awful as well) was bad. Losers beat winners 4-3 at the New York Stock Exchange and by almost 2-1 at the Nasdaq Market Site. Clearly, this was a day of broad portfolio distribution. Not, however, the end of the world.

Liu He To The Rescue

While it did seem that "the big one" might be underway, support showed up. "They" bought the dip, again. A potentially awful day did not develop. What the? One day after the U.S. Senate unanimously passed a pro-human rights bill limiting munitions sales to Hong Kong in support of pro-democracy protesters, the U.S. House of Representatives passed by a 417-1 score a bill merging the Senate bill with one that they had already passed. This puts the football in the president's lap.

Traders might think (I might think) that this puts the administration in a delicate position at a difficult moment. Enter Chinese Vice Premier Liu He, who overnight, reportedly said publicly that he was "cautiously optimistic" in regards to reaching that "Phase One" trade deal with the U.S. Equity index futures trading in the U.S. that had been considerably lower, in response weaker equity performance across both Asia and Europe headed for daylight. As I bang out this morning note, I have watched our implied opening turn from very red, to kind of red, to green.

What is obvious here is that we just have too much information, and algorithms lead on every headline. Does it mean a lot that Lie He remains sort of optimistic? I'm optimistic every year at Spring Training. My team still hasn't won the trophy since 1986. Can President Trump "slow walk" making a decision on the Hong Kong bill headed for his desk? The bill surely angers the Chinese government. Does this make the bill a point of leverage? If so, where does that leave us as a people, ethically? Not easy questions to answer. For anyone.

Ladies and gentlemen, the spread between the yields of the three month T-bill and the 10 year note. New kids, I want you to get in the habit of checking this spread every day, in fact check it every time you see markets move. This is the spread that has been running things for almost four months now.

Awful couple of weeks, isn't it? Even with an impotent "golden cross" staring traders in the face.

This is a lesson for novice traders. For they are my people. Seasoned pros, I love you, but hopefully you are able to defend yourself at this point. Remember my Target (TGT) short position from my Real Money piece on Wednesday? Well, the position did not play out as planned, which is excellent. Excellent? Sarge, you're losing money. No worries, gang, I always stay within myself, and I have always (in my opinion) been an above average risk manager. Okay, I'm confident. Fight me, bro. So what does a trader do, when a trader is left carrying a bad short position? Hmm. Let's go there.

For background, I wrote to you yesterday and told you that I had shorted Target in the pre-opening session, even though I liked the stock, because I saw the rally as excessive. I was wrong. The rally kept going. There were several moments in the morning where I could have turned a quick profit. Alas, I did not. Instead, I shorted my first lot at $121.22, and shorted the darned thing all the way up to $126.67. By the time that I had shut it down, I was left with an average price of $125.05, and a position twice the size that I had in mind when I started. TGT closed at $126.43. There was much weight lifted after the bell. Old guys rule. Just sayin'.

What can a trader, at that point do? Door number one is the ugly choice. That's the one where the trader simply bites the bullet and buys back the shares out of fear that losses gets out of hand. Door number two opens new traders, unaware of just how helpful the flexibility created through understanding the proper use of options can be in the prosecution of risk management. Patience is however... required. As are shirts and shoes.

The plan is to cap the loss at a level deemed acceptable to the trader, while mitigating that expense by setting up a profitable trade where desired. Got me? (This is where you say "gotcha") Good. Let's move. (By the way, 99% of pundits out there will not be this honest with you, nor will they teach you how to defend yourself. You only get this stuff at Real Money. So, rock on.)

A) What the purchase does is cap this loss at under $5, which is actually my limit on this one.

B) In this example, the trader pays for that purchase (its free!) by committing to a potential $123 equity purchase (remember, we're short these) upon expiration in one month's time should the shares sell off. Now, we have created a defined range for our repurchase. Risk managed.

C) About the add-on... Should the same trader know where they are willing to get long the shares, not buy back the short, but get long, the trader can commit to that exposure as well. What this does, is reduce the loss by $1.12 should the trader end up exercising the $130 call, or reduce net basis to $118.88 should the trader end up paying $120, after already realizing a profit on the short. Sarge, we love you. Thank you, thank you very much.

Just who the heck are these guys? Ahh, just a cloud-based human resources software developer with a focus on workforce e-training that has been creating programs that themselves focus on workplace rules and appropriate behavior.

There are a few things you should know. Cornerstone OnDemand  (CSOD) has been targeting a younger crowd for training, Gen Z. Earlier this month, the firm announced a partnership with Facebook's (FB) Oculus subsidiary to offer virtual reality type workplace training. While revenue has been growing at an 8% clip as of Q3, subscription revenue growth is twice as fast. Oh, and the firm has also authorized a $150 million shares buyback program as of this past summer. 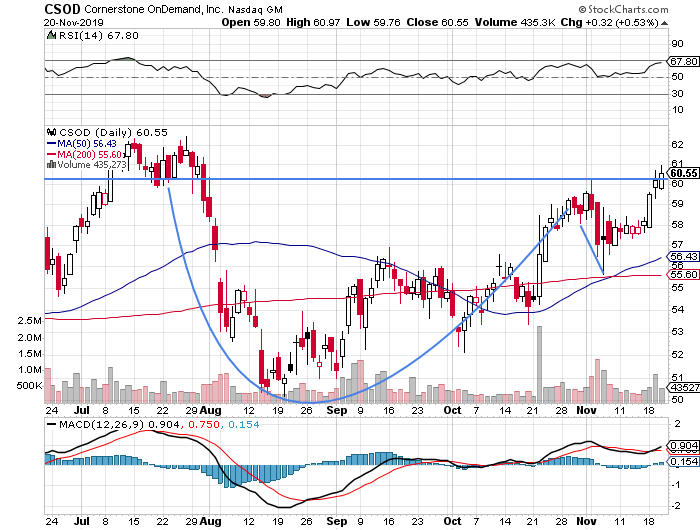 The chart is what caught my attention to be honest, more so than the deal with Facebook. This stock seems to be in the middle of a potential breakout of a cup with handle formation, while continuing to display health Relative Strength as well as a bullish looking daily MACD. The pivot here is $60.25. Should that spot hold, there is no technical reason why these shares can not see $72 (20%), or $75 (25%). If I do go there, and I might, the $55 level lines up as a potential panic point (8% discount).

Get an email alert each time I write an article for Real Money. Click the "+Follow" next to my byline to this article.
TAGS: Investing | Markets | Options | Politics | Stocks | Technical Analysis | Trading | Retail | Software & Services | China