Well, not that easy. The S&P 500 opened well above the seemingly impenetrable 50 day SMA on Thursday morning, and continued to trade higher for roughly 45 minutes. The index peaked for the day at that time, but never sold off hard at any point through the rest of the session, instead trading sideways for almost six hours. What changed? You all well know by now that there will be high level trade negotiations in Washington in mid-October between leadership delegations representing the U.S. and China. Meeting number 75? Sure feels like it.

Though I suspect that this may be an effort to provoke President Trump to delay the next deadline for increasing tariffs on Chinese imports (October 1) ahead of the anniversary of the communist take-over of mainland China (also October 1), which is a high focus event in that nation, there does seem to be an aura of more confidence from the Chinese side in actually getting something accomplished this time. Call me skeptical, but I trade the environment, and not my starchy views on what is versus what should be.

Mirror, Mirror On The Wall

Though broader markets performed well (the Nasdaq Composite also broke above the 50 day SMA), it was left to more specialized corners of our beloved equity markets to lead the way. Beyond the banks that clearly benefited from a slightly steepening yield curve as well as the un-inversion of the two year/10 year spread, transports and semiconductor stocks (both highly exposed to trade and economic growth) truly made impressive runs. The Dow Jones Transportation Average ran 2.56% for the day, on strength across all business lines. Interestingly, while the airlines and rails were quite strong, the top two performers among these transports were Kirby (KEX) , and Matson (MATX) . That's right, marine transport. When was the last time you saw ocean delivery lead the index?

What does that tell me? That maybe, as excitement builds over the next few weeks over the planning of these trade negotiations, that the rest of September might be a lousy time to be underexposed to big oil. Let's not forget, that regardless of the short-term ups and downs in the oil patch, that exploration/production type names such as British Petroleum (BP) , Royal Dutch Shell (RDS.A) , Chevron (CVX) , and Exxon Mobile (XOM) are all cash flow machines trading at below market forward looking multiples. In my opinion, every one of these names can now almost be looked at as defensive, while for the investor accessing upside exposure to trade (not to mention economic growth). These names are all high dividend payers. In the case of BP and RDS.A, those yields rise above 6.5%. Think these lofty yields are not sustainable? I just told you these firms are cash flow machines, and in a JP Morgan research note earlier this week, opinion was made that BP might actually increase the annual $2.46 (6.58% yield) payout later this year and perhaps next year as well. Yes, I am long BP.

How important are the BLS numbers for August employment? The numbers are always important, but there will be some peculiarities lined up for this report that we must focus on with the Atlanta Fed's model for Q3 U.S. GDP currently running at 1.5% annualized. First off, Non-Farm Payrolls are expected to print close to a seasonally adjusted 160K. For calendar year 2019, the headline number for job creation has been averaging 165K, down from 223K in 2018. I have heard whispers much higher than 160K for today, yet the BLS has already told us that downward revisions of more than 500K are on the way for the year long period ending this past March. In other words, the BLS is admitting that they have routinely over estimated job creation by an average of roughly 41K per month. Can we trust the number posted? Beats me.

My focus today will be on participation (which has been strong), on wage growth (which has been getting soft), and on demand for existing labor (average workweek: also softening). This last one is key, as July's 34.3 hours was the lowest average workweek print since 2017, and a reduction in hours worked is the obvious step taken by mangers ahead of actual payroll reduction.

I have zero percent interest in taking any kind of long position in shares of WeWork, once the firm goes public. Zero. Word is that talk is of valuations of $20 billion, down from $47 billion or so. Consider the shares of London-based IWG. That operation runs more sites than WeWork, as well as a comparable number of workstations. IWG's market cap? A cool BP3.7 billion, or $4.55 billion. By the way, WeWork's losses for 2018 amount to nearly 10% of this new "suggested" valuation. Nuff said.

Those trading along will recall that earlier this summer, when the shares of Lockheed Martin (LMT) took and held our $375 target price that we sold a partial and took that target price up to $390. Well, on Thursday, Lockheed amid the sudden market euphoria, traded as high as $393.43 before the day turned sour for this top-notch defense contractor. The shares closed close to the bottom of a more than an $8 range as well. Take some off when LMT hit target? No. Okay, what now?

Is a potential trade peace with China bad for Lockheed? Manufacturers of fighter aircraft do need easy access to rare earth minerals. That's a positive. You know what is not a positive? Remember those 66 updated F-16 Falcons that were the significant component of a proposed $8 billion sale of arms to Taiwan? I would say that there is a good chance that this deal could quickly become a pawn in coming negotiations between the U.S. and mainland China. That's what I think is happening there.

My thought is that there is no need for despair. Lockheed is in my opinion, still a beast, still the leader in hyper-sonic weaponry. Still the manufacturer of the F-35. However, a lesson that I often teach is to take some kind of action at both target prices and panic points as a reinforcement of personal discipline. Honor thyself through commitment to excellence.

You may have (probably not) noticed the $347 million contract awarded last week by the U.S. Army to Lockheed to integrate at least eight glide bodies with guidance systems. The goal here is to arm a battery of four Long Range Hypersonic Weapons (LRHW), which will be a land based launch system should delivery by the U.S. Air Force of U.S. Navy be somehow neutralized in a sustained conflict with the Chinese or the Russians, both of whom are believed to be ahead of the U.S. in developing this kind of high speed weaponry (current systems are thought to be defenseless against, btw).

This contract is in addition to two contracts already in place with the U.S. Air Force for Lockheed, one similar to the U.S. Army system at a cost of $480 million, the other supposedly different for a cool $928 million. In addition, Lockheed was also awarded a joint $2.4 billion contract for F-35 modification where funds are not transacted at the time of award, but upon orders as they come in from the U.S. Air Force, the U.S. Navy, the U.S. Marine Corps, Non-DOD participants, as well as Foreign Military Sales Customers. 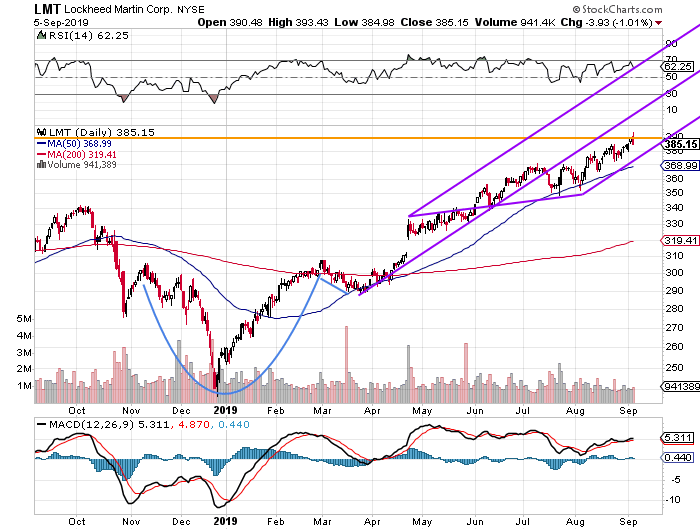 The Chart is fine, though the break out of that cup with handle that I gave you last spring is certainly extended. My current panic point is $359. That said, the 50 day SMA stands at $369, as the lower trend line of our Pitchfork resides in real-time at $370. This is the spot where I get concerned. I believe that this name makes another run at target. That said, this one is a significant winner for us, and that has to be protected.

Both Crowdstrike (CRWD) and Zoom Video (ZM) are likely to lose contact with their individual 50 day SMAs based on overnight trade in the wake of solid earnings reports. Both guided forward above consensus. Both firms are experiencing an expected slowing of still impressive sales growth. Both floats are majority owned by funds, and portfolio managers get funky around 50 day and 200 day lines.

Those interested have been waiting for a discount to get into these names. Not saying folks should not get involved. Am saying be mindful that bigger players might act differently. Incremental trading.

Get an email alert each time I write an article for Real Money. Click the "+Follow" next to my byline to this article.
TAGS: Investing | Jobs | Markets | Stocks | Technical Analysis | Trading | Defense | Oil Equipment/Services | China |