During the Lightning Round segment of "Mad Money," callers can ask Jim Cramer his opinion on stocks they are interested in. Tuesday night one caller asked about Chewy Inc. (CHWY) .

"We love dogs and we love Chewy," was the response.

Let's check and see if this love is reflected in the charts and indicators.

In this daily bar chart of CHWY, below, we can see the price action since the company made its debut in June. Prices declined from June to the middle of November, but then the story changes. CHEWY has rallied smartly from the $22 level in November, and the slopes of the 20-day moving average line and the 50-day moving average line have turned positive.These two moving averages are shorter than our 50/200-day combination, but here we have less data to analyze.
The trading volume has increased in December, as prices recovered and I consider that a positive development. The daily On-Balance-Volume (OBV) line bottomed in October and November and strength in December tells us that buyers have finally turned more aggressive. The Moving Average Convergence Divergence (MACD) oscillator made a higher low in November vs. October, even though prices made a lower low. This bullish divergence helped to signal the move higher. The MACD oscillator crossed the zero-line in December, but has recently turned down for a take-profits sell signal.

In this Point and Figure chart of CHWY, below, we see a positive picture, in my opinion. Prices just made a new high for the move up at $29.81. Yes, the chart suggests there is chart resistance above $30, but the base from September -- look for the "9" on the chart -- is impressive, even though no upside price target has been projected. 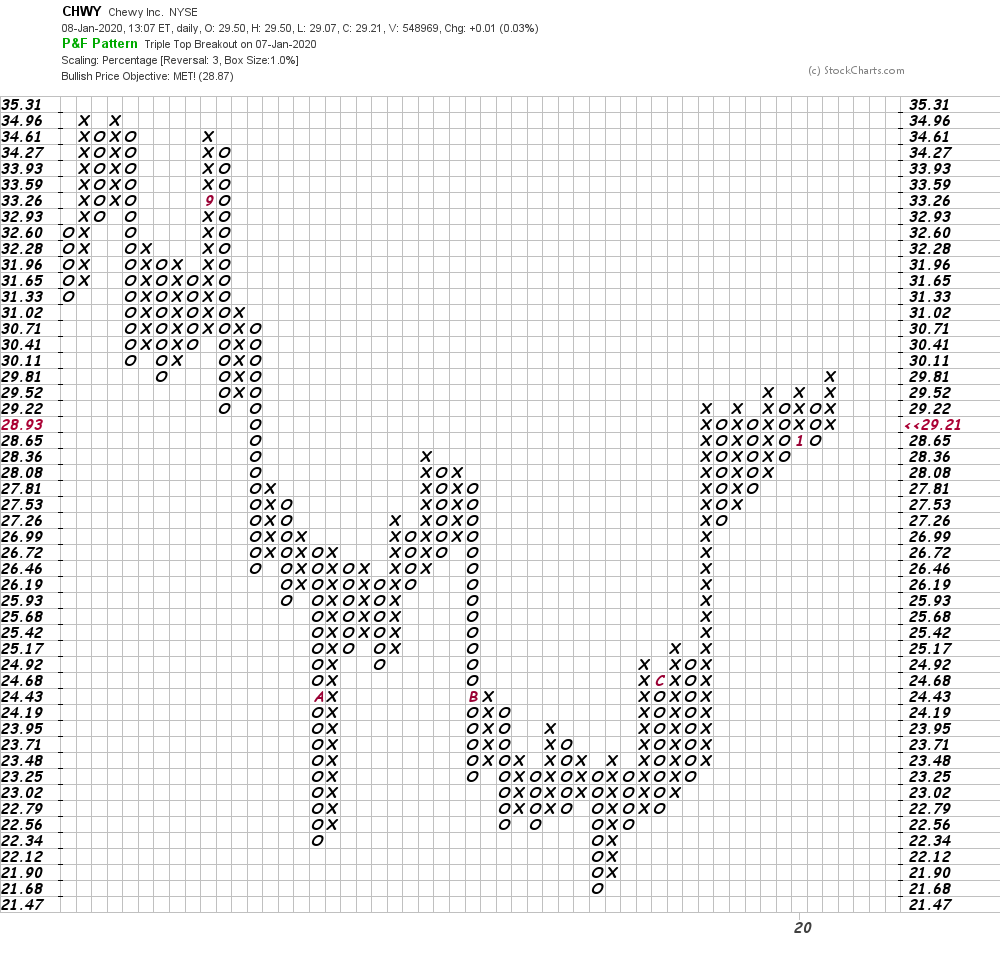 Bottom line strategy: Risking a close below $27, traders could go long CHWY in the $30-$28 area, looking for a move higher in the weeks ahead. Consumers look to buy things online.
Get an email alert each time I write an article for Real Money. Click the "+Follow" next to my byline to this article.
TAGS: Investing | Technical Analysis | Pets | Mad Money