The Energy sector has been tough on traders for a little while. Okay, maybe longer than what normal folks consider to be a little while. Personally, I have not been in the sector at all (save for a small long position still held in BP PLC (BP) simply for the purpose diversity in investment) since early February, and that was a pairs trade that made me some money on the Exxon Mobil (XOM) side and cost me just a tad more than I made in XOM on the Chevron (CVX) side. This evacuation of the industry came ahead of my realization of what we, as humans, were about to go through and really was in response to what business leaders like Larry Fink of BlackRock (BLK) and Satya Nadella of Microsoft (MSFT) were saying at the time. Investment thinking ahead of the public health crisis was really ESG focused, and all about carbon footprints.

Has this investment theme changed much? Not really at heart, even though the very same people who scream about saving the earth often throw the latex gloves that they just used on the parking lot floor when leaving the grocery. Right next to the paper mask they just tore off as if it in some way inhibits breathing. Back to the subject at hand. I'm not crazy about traditional fossil fuel energy producers these days. Who is? The valuations are tempting. Dividend yields if paid, and if sustainable, are certainly interesting. I will need some convincing before expanding my tiny exposure to space. That's basically because I have been wrong when I have gotten behind the large producers. Long time readers are well aware. I can manage a poor position, and even turn it my own shade of green. I'm even good at that, but that's out of necessity. That's not why I'm here. The question now is this? Does the Chevron news this morning make the name attractive?

Breaking news. It's the first significant M&A activity within the energy sector since the public health crisis became just that. It's also the first move like this made by Chevron since taking a hike on Anadarko Petroleum. That firm was eventually "won" by Occidental Petroleum (OXY) . Chevron has agreed to acquire Noble Energy (NBL) in an all-stock deal valued at $5 billion. This would price NBL at $10.38 per share, or a 7.6% premium over the $9.65 price that NBL closed at on Friday night. Including Noble's rather heavy debt-load, this becomes a $13 billion deal.

What does this deal do for Chevron? For one, it increases Chevron's exposure to the Permian Basin as well as the DJ Basin (Colorado). The deal also creates exposure for Chevron to Western Africa as well as the Eartern Mediterranean. Chevron's strategy had already been to focus upon U.S. shale as well as global natural gas, so this does appear to be a fit. For that matter, Chevron does expect the merged firms to generate $300 million in annual run-rate annual cost synergies before taxes. The firm also looks for the deal to be accretive to both earnings and free cash flow as well.

Know what I noticed? A lack of enthusiastic response by Wall Street's community of analysts. Nobody is pounding the table. The shares could be worthy of investment, but that would be what it is. An investment based on dividend yield with an intention to drive cost basis lower through consistent and repetitive selling (writing) of covered calls against the position. There may be something here, but in this world and in this environment, there is no "hot" trade. This will be focused work. 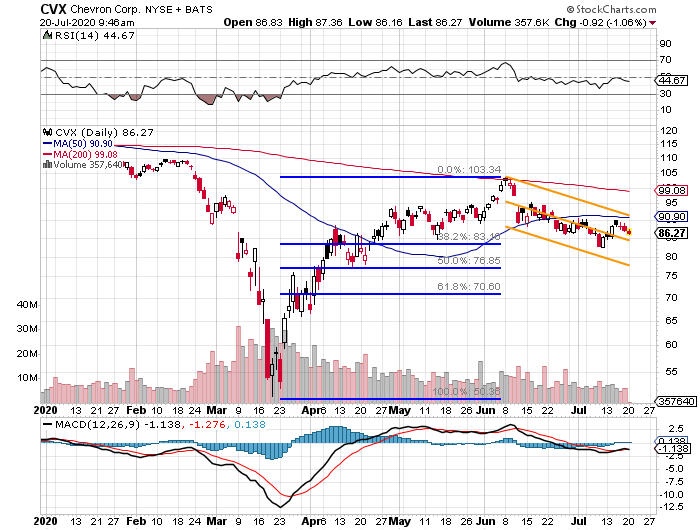 Readers will note that Chevron has found rough Fibonacci support just below the 38.2% retracement level, while struggling through a series of lower highs coupled with lower lows since peaking in early June. My thought is this. I would rather try to grab a few of these on momentum should the shares break above the 50 day SMA (currently $90.90) than I would close to but below that blue line. The target would be the 200 day line as the shares have failed there before. Let's not forget, I don't think the trade works with both a regular dividend and regular sales of revenue producing covered call options working in the investor's favor.

An example would be an investor who purchases 100 shares of Chevron today close to $85 a share, and immediately puts out one CVX August $90 call at about $1.75. That investor has in essence paid $83.25 for those shares. Chevron has typically declared a quarterly dividend in late July. Should the firm do that again this year, and pay $1.29 as they have twice this year already, then we're talking about a net basis of $81.96. By then, it's time to roll over the covered call. See how this works? Do you now see why guys like me have an edge. This edge is really just old school training, and it's simple. This edge is here for the taking. For you. My friends.

Get an email alert each time I write an article for Real Money. Click the "+Follow" next to my byline to this article.
TAGS: Mergers and Acquisitions | Investing | Markets | Oil | Stocks | Technical Analysis | Trading | Energy |