Jim Cramer told Mad Money viewers Monday evening that as smaller businesses have been forced to declare bankruptcy, the larger ones are reaping the rewards. It's called the "last man standing," Cramer said, and while it's horrific for the American worker, it's great for those businesses with the balance sheets and the technology to pivot into our new world.

Let's check out the charts and technical menu of CAKE.

In this daily bar chart of CAKE, below, we can see that prices have tripled in the past 12 months. CAKE is trading in an uptrend and above the rising 50-day moving average line as well as the slower-to-react 200-day moving average line. Trading volume has been in a decline since June and that is not the kind of picture that old chart watchers like myself like to see. We like to see volume expand with the trend.

The On-Balance-Volume (OBV) line shows a rise from July and that is helpful. The OBV line, however, has rolled over slightly the past six weeks or so. The Moving Average Convergence Divergence (MACD) oscillator crossed to the downside in March for a take profit sell signal.

In this weekly bar chart of CAKE, below, we see some beginning signs of weakness. Yes prices are in an uptrend above the rising 40-week moving average line but prices are up four-fold from their pandemic nadir without any significant corrections.

The OBV line shows a strong rise from last April but it has rolled over in March suggesting a shift from aggressive buying to aggressive selling.

The Moving Average Convergence Divergence (MACD) oscillator has narrowed in recent weeks and could cross to the downside in the weeks ahead.

In this weekly Japanese candlestick chart of CAKE, below, we zoomed in on the last six months so we could highlight the bearish hanging man pattern in March (notice the long lower shadow) after the string of record highs.

The hanging man is followed by bearish confirmation in the shape of a red real body. Candle charts do not generate price targets so we need to look at some Point and Figure charts.

In this daily Point and Figure chart of CAKE, below, we can see a potential downside price target of $56. This is not so terrible but it could put prices in a location to test both the rising 50-day moving average line and the low closes of March. A break of these chart points could precipitate further losses. 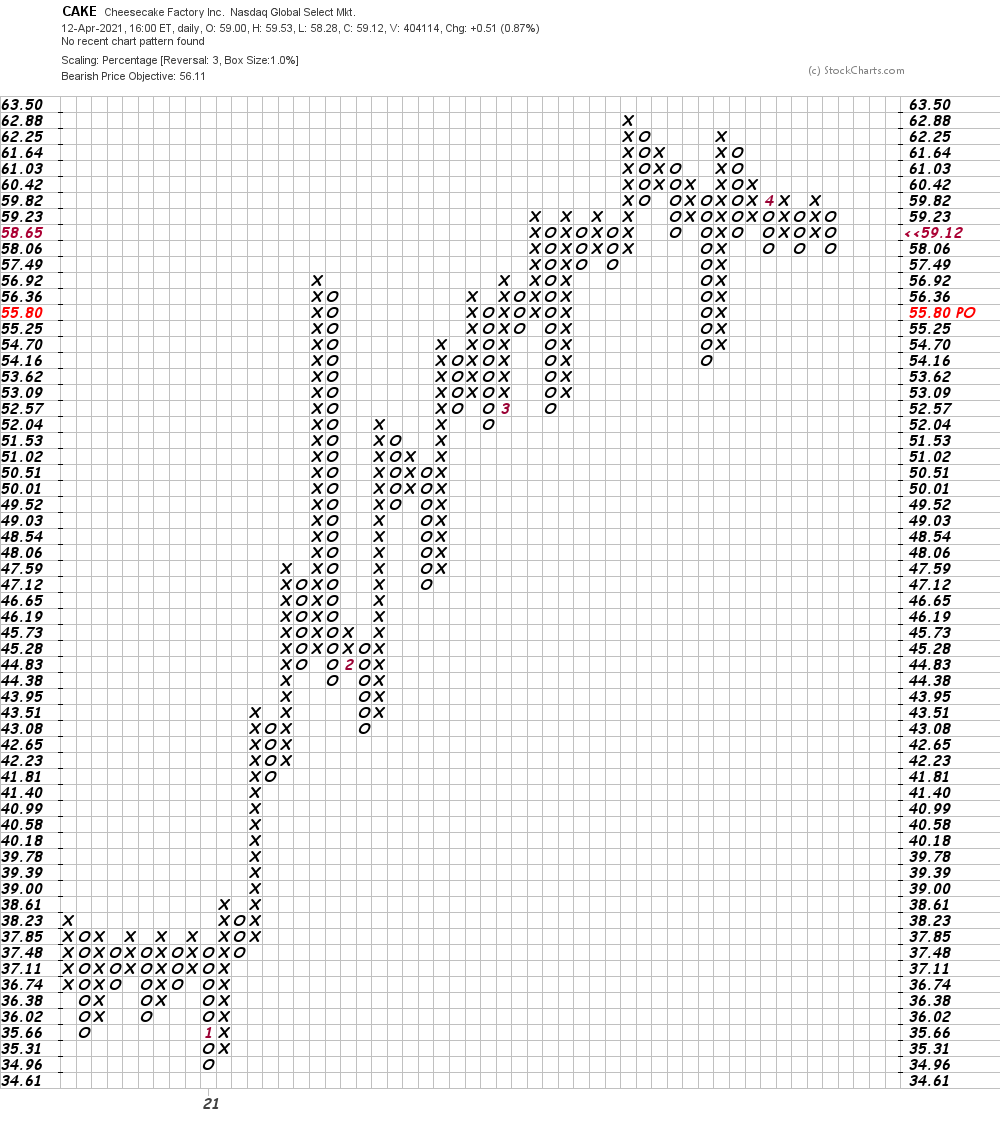 In this weekly Point and Figure chart of CAKE, below, we can see that the software is projecting the $100 area as a potential price target.

Bottom line strategy: It might be wise to trade carefully with CAKE in the short run as a number of indicators are pointing towards some sort of correction. Longer-term, CAKE could reach new highs.

Get an email alert each time I write an article for Real Money. Click the "+Follow" next to my byline to this article.
TAGS: Investing | Stocks | Technical Analysis | Trading | Restaurants | Mad Money