The last time I reviewed the charts and technical indicators of General Electric (GE)  was back on November 19, we I wrote that "The past eight months of trading on GE now appears as a bottom. Great, but can an eight-month base be enough to turn around such a huge company? I would anticipate that GE makes a bigger base with trading bounded by $12 on the upside and the $8 area on the downside."

Let's see how that strategy is doing.
In this daily bar chart of GE, below, the $8 to $12 trading range did not last for long but the idea of a bigger base is still going. Prices tested the rising 50-day moving average line in late January and early February and turned up to make new highs for the move. GE popped briefly above $14, but has retraced much of the gains. We could soon see another test of the 50-day line. The trading volume has been increasing from the middle of February so we know the rally has attracted new buyers. The On-Balance-Volume (OBV) line finally bested its December high but looks like it is turning lower again. The Moving Average Convergence Divergence (MACD) oscillator made a lower high in March than December for a bearish divergence. The indicator is currently crossing to a take-profit sell signal.

In this weekly Japanese candlestick chart of GE, below, we can see a mixed picture. Prices are in an uptrend and trading firmly above the rising 40-week moving average line. Prices have pushed above the early 2020 highs but the current weekly candle is bearish (red - telling us that prices are lower than the opening). The trading volume is not heavy or rather it does not appear to be "breakout worthy" in my opinion. The weekly OBV line is rising in February but is not keeping up with the price action I believe. The MACD oscillator shows narrowing in February but it is still bullish.

In this daily Point and Figure chart of GE, below, we can see a downside price target of $11. Not a meltdown but it suggests buyers do not have to have to buy at the market. 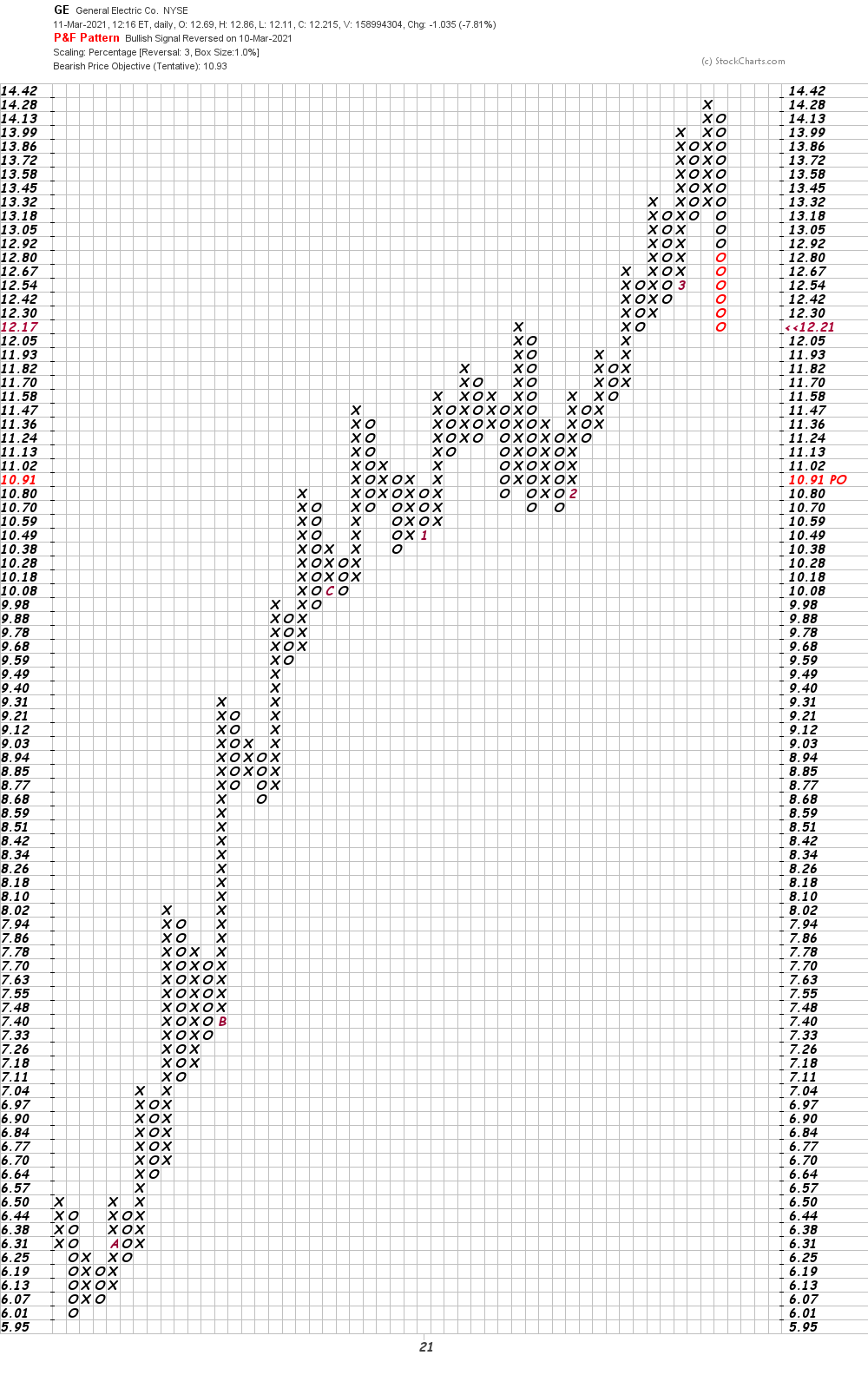 Bottom line strategy: Looking to add to your long position in GE? I would wait to see if prices test and hold $11.
Get an email alert each time I write an article for Real Money. Click the "+Follow" next to my byline to this article.
TAGS: Investing | Technical Analysis | Energy | Technology | Industrials