We last looked at Apple (AAPL) on July 23 as prices began a correction. We noted that "AAPL has not made a major top formation so consider this a shake out/correction. It will run its course and the longer-term uptrend will eventually resume." Prices declined to the $360 area and then resumed its advance and tacked on about $100.

We also  looked at the charts of AAPL on May 12, writing, "Stay long shares of AAPL recommended in previous updates. Raise sell stops to $301. $350 and then $400-$424 are the price targets."
With prices now trading around $450 a fresh look at the charts is in order.
In this updated daily bar chart of AAPL, below, we can see that prices have been soaring since their earnings report on July 30 and the announcement of a four-for-one stock split later this month. The trading volume has been heavy telling us that traders and investors have voted with their feet.
The On-Balance-Volume (OBV) line has soared higher and tells us that buyers of AAPL have been more aggressive.
The trend-following Moving Average Convergence Divergence (MACD) oscillator has turned upwards to a new outright buy signal.

In this weekly bar chart of AAPL, below, we can still see a bullish picture with no signs of selling or topping. Prices are in a strong uptrend with limited corrections. AAPL is above the rising 40-week moving average line and if this was some other company we would say that prices were extended above the 40-week line.
The weekly OBV line has been strong the past three years and stands at a new high to confirm the new price highs. The MACD oscillator remains in a bullish alignment.

In this updated Point and Figure chart of AAPL, below, we can see a price target in the $660 area. Prices will probably not reach that target by the time of the stock split later this month but it gives us a post-split target of $165. 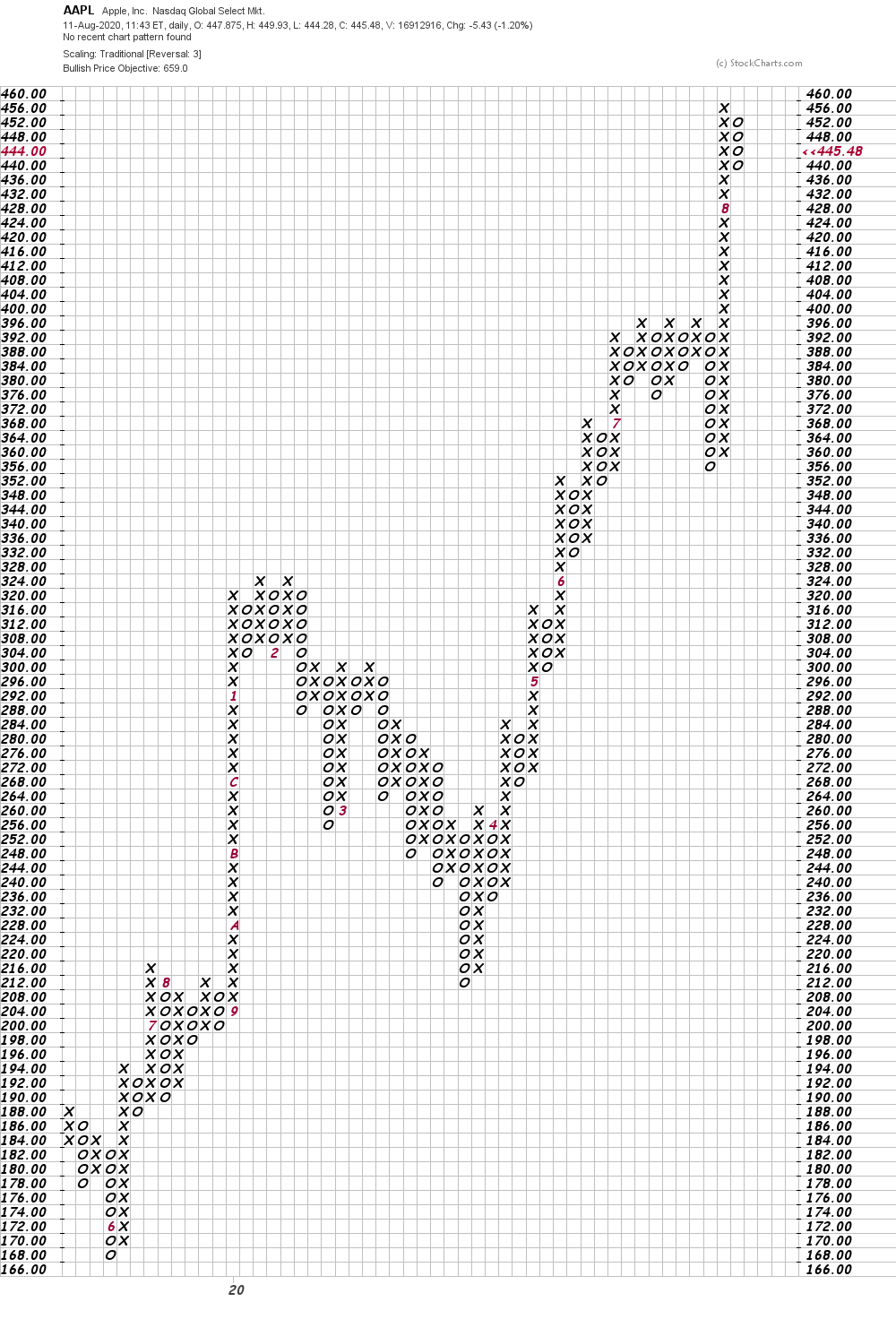 Bottom line strategy: Longs should consider raising stop protection to a close below $380 from $301.

Get an email alert each time I write an article for Real Money. Click the "+Follow" next to my byline to this article.
TAGS: Earnings | Investing | Markets | Stocks | Technical Analysis | Trading | Movies | Music | Technology | Telecommunications