The major equity indexes closed mixed yesterday with negative internals on the NYSE while those on the NASDAQ were positive. Volumes declined on both exchanges from the prior session. No violations of trend or support were registered on the chats, leaving them in a mix of neutral and negative near-term projections.

Meanwhile, the recent deterioration of market breadth continues to be a concern. The data remains a mix of neutral and negative signals as well. As such, we are maintaining our near-term "neutral" macro-outlook for equities as we await clearer indications from the weight of the evidence from our discipline. 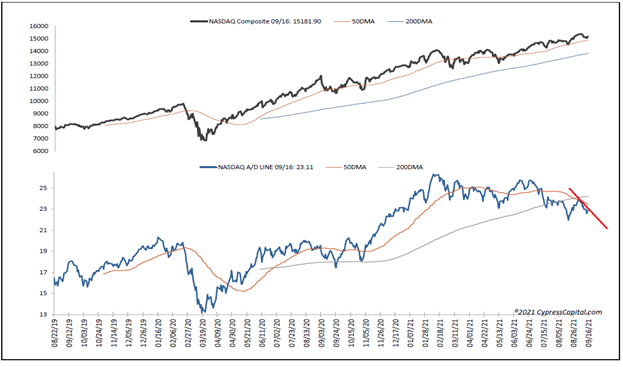 The COMPQX, NDX and DJT posted gains as the rest declined.

There were no violations of support or trend. Thus, the SPX, COMPQX, NDX, DJT and VALUA are still in neutral/sideways patterns with the rest negative.

Market breadth continues to be a notable concern as its deterioration over the past several sessions implies a weakening internal structure.

The chart of the NASDAQ A/D shows the current downtrend with a series of lower highs and lower lows as a case in point.

The DJI, MID and VALUA gave bullish stochastic crossover signals but are not yet actionable, in our opinion, as resistance levels have not been violated.

The Rydex Ratio measuring the action of the leveraged ETF traders lifted slightly to 1.23 and still finds the ETF traders heavily leveraged long and on a bearish signal.

The Open Insider Buy/Sell Ratio was unchanged at 32.2 and remains neutral.

Valuation finds the forward 12-month consensus earnings estimate from Bloomberg lifted to $207.53 for the SPX. As such, the SPX forward multiple is 21.6 with the "rule of 20" finding fair value at approximately18.7

The SPX forward earnings yield is 4.64%.

The 10-year Treasury yield rose to 1.33% but remains within its current trading range with resistance at 1.4% and support at 1.23%.

In conclusion, while we remain "neutral" in our near-term outlook for equities, the charts and data continue to suggest some degree of caution is warranted. We reiterate our belief that "sell signals" on individual names should be honored.

Wednesday was quite messy for the markets, but it was just another step forward in consolidating recent positive action.

'Heed' My Advice, 'Lock' in Some Gains on This Defense Contractor

Here's how to play LMT, a 'left to right' blue-chip stock on a dip.