Ever been wrong? Of course you have. Same here. Often, in fact. Just a day ago, I was quite wrong, publicly on my opinion regarding the immediate prospects for the Walt Disney Company (DIS) . I saw little chance for those shares to do very well unless there were to be clear and quick medical breakthroughs in the fight against Covid-19 that simply allow consumers to consume. En masse. Without fear. Of course those interested in purchasing a stake in "The House of Mouse" had their own opinions. The rest is history.

As a trader, these errors in judgment present as opportunity cost. As an investor, not so much. On days like Wednesday, or really in eras such as this... with monetary policy and fiscal policy both supportive of rising asset prices (thanks to rising money supply and low interest rates), this has been a time to watch the unrealized value of a core portfolio rise, while occasionally sticking one's neck out to take a chance (or two). Why even take such chances?

One. In markets such as these, it becomes easy to camouflage mistakes. These Mistakes may show up individually, but not so much in terms of bottom line profit/loss ratios. Two. There is an impulse to at least try to outperform markets at times when such markets feel "optimistically" stable, when investors feel fairly certain that at the professional level, accumulation is outrunning distribution.

The S&P 500 rallied for a fourth consecutive day, and on rising volume. The Nasdaq Composite? Need I say it? Another record after just kissing the 11,000 level. Six straight winning sessions there. Those two indices might be at the headline, how U.S. equity market performance is judged on a daily basis by those in the mainstream. The fact would be that narrower, more specialized indices outperformed broader markets on Wednesday. The Dow Transports, the Dow Industrials, and both of our widely recognized measures of small cap market performance all beat the rest of Wall Street in percentage terms.

Figure this. In a year where both the global and U.S. economies have suffered and are suffering through a pandemic that has caused the deepest economic recession in living memory, the Nasdaq 100 and Nasdaq Composite are up 27% and 22% year to date. Even the S&P 500 is now up on the year. The Dow Transports and the Russell 2000, both far more reliant upon organic economic activity, or at least one might think, are down single digit percentage points at this time. Check out these two indices, two that are not my usual focus.

The Dow Industrials are closing in on a "golden cross", now within 10 points of seeing the 50 day SMA cross over the 200 day SMA. That's generally seen as a bullish signal. This late in the rally? Not if it's early. Know what I mean? Policy is not going to get more hawkish anytime soon. That will take a crisis of confidence. In the currency. That, we do not need. One crisis at a time, please. The Transports have broken through the highs of May. A big deal? Not yet, but perhaps on the "big deal" radar.

What gives? The same economic force that has driven commodities such as gold, silver, and even oil and copper if not to new highs, at least way, way off of their lows. Does it not stand to reason that asset prices would increase in dollar terms if dollars are worth less? How's your portfolio doing in yen terms, or euro terms, or if measured in gold bullion? Now, try your home. Sobering? Yes.

No worries. The "three" sides are still negotiating in Washington, and what markets expect to happen over the rest of the year on that front should be more aggressive than not, in an election year where everyone hates the other guy without acknowledging the visible warts on their own side. Yes, I am speaking to both of you.

According to the ADP Employment Report for July, private sector job creation tailed off badly, landing at just 167K (which used to be a normal number) for the month. This number hit the tape with economists looking for something in between 1.5 million and 1.8 million. Just one thing. We understand that the data started to turn sideways probably as early as mid-June. That said, ADP revised its own print for June from a rough 2.369 million to 4.314 million. Almost two million jobs. This adjustment does two things as far as I can see. One, it gets the ADP print for June in line with the BLS Non-Farm payroll number for that month, which was close to 4.8 million. Two, I really can not trust the ADP number for an extra month after the initial print. Perhaps the situation is too fluid. Perhaps releasing these numbers need to be pushed out a couple of extra weeks on the calendar.

Even understanding all of this, I think this creates uncertainty and increased risk around this Friday's data. We all know that the virus has put a serious hurting on a number of highly populated states as infection has spread. Surely, this has slowed job creation. Just how much? See you tomorrow on that question.

So, it is that the Treasury Department now estimates that total borrowing for fiscal year 2020 will land around $4.5 trillion, up from $1.28 trillion for fiscal 2019, which we thought was bad at the time. Treasury has also announced an increase in the size of all monthly auctions across all maturities, loading up a little more on the longer end (10 year, 20 year, and 30 year maturities) than on the short end, which makes sense. The $4.5 trillion figure factors in both an increase to the department's cash balance as well as about $1 trillion currently under negotiation. I think the number is probably a little on the light side, given that markets are probably pricing in more than $1 trillion for whatever deal Washington manages to put together this week. Worst thing that could happen to the markets, and to average folks right now? No deal.

Problems? While the firm's platform can be central to the entire ecosystem that is streaming entertainment, and it stands to reason that at least some percentage of what has become the "stay at home" economy will never reverse, this outstanding revenue growth is actually a deceleration of what the firm experienced prior to 2020. Okay, that's a problem, but that's not the problem. "The problem" was that Roku acknowledged that per-account streaming activity had leveled off later in the quarter, and that the short-term future in terms of advertising on the platform for the rest of the year is indeed "uncertain." The shares sold off on the commentary. After closing at $165.42 on Wednesday afternoon, I see ROKU trading around $158 overnight. That's -4.5%. 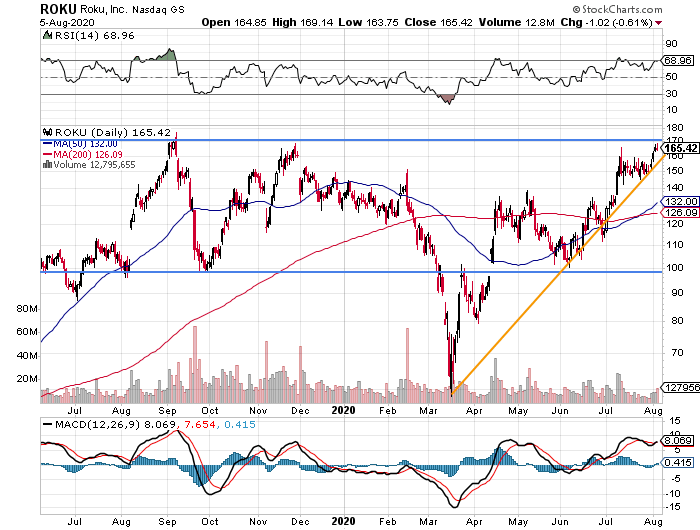 While the shares have largely traded sideways for a full year if one is willing to omit the month of March, if one does accept that month at least technically, we now see a giant ascending triangle that has closed. This suggests a violent short-term move that one might think bullish. Speaking of being wrong, this name has fooled me in the past, so I take nothing for granted. I would rather grab a few of these close to $150. That's where the July base is, and that's where the orange trend line is.

The game plan is this. I am likely to place a bid down around that level, and forget about it while I do the rest of my job. I will either check on this name after the opening bell, or when I get a notification that I have been run over. That is when I look to layer the bid side, as well as write something against the position.

(Disney and Bristol-Myers are holdings in Jim Cramer's Action Alerts PLUS member club. Want to be alerted before Jim Cramer buys or sells these stocks? Learn more now.)

Get an email alert each time I write an article for Real Money. Click the "+Follow" next to my byline to this article.
TAGS: Earnings | Economy | Gold | Investing | Jobs | Markets | Politics | Stocks | Technical Analysis | Trading