Starbucks' (SBUX) focus on "the next big thing" has been a key to continued success for the chain. The next paradigm shift the company is keying in on is clearly one based on convenience.

"Starbucks has been a pioneer among retail and restaurant companies in navigating changes in consumer behavior caused by demographic shifts and technology disruptions," Stifel analyst Chris O'Cull said on Friday. "The company has reinvested in core equities, expanded usage through new products, and integrated e-commerce into its global store network, all of which have contributed to positive consumer sentiment and greater spend per visit. "

Shares of the Seattle-based coffee giant were flying higher on Friday, certainly helped along by these key 2019 initiatives into the app and delivery economy.

For the app economy, Starbucks Rewards membership has been a major mover in same store sales that promoted the strong earnings and positive forecast.

The program's membership increased 14% to 16.3 million in the U.S., while non-member digital relationships increased to 13 million. The increase quarter over quarter is the largest quarterly increase in absolute terms since the second quarter of 2015. 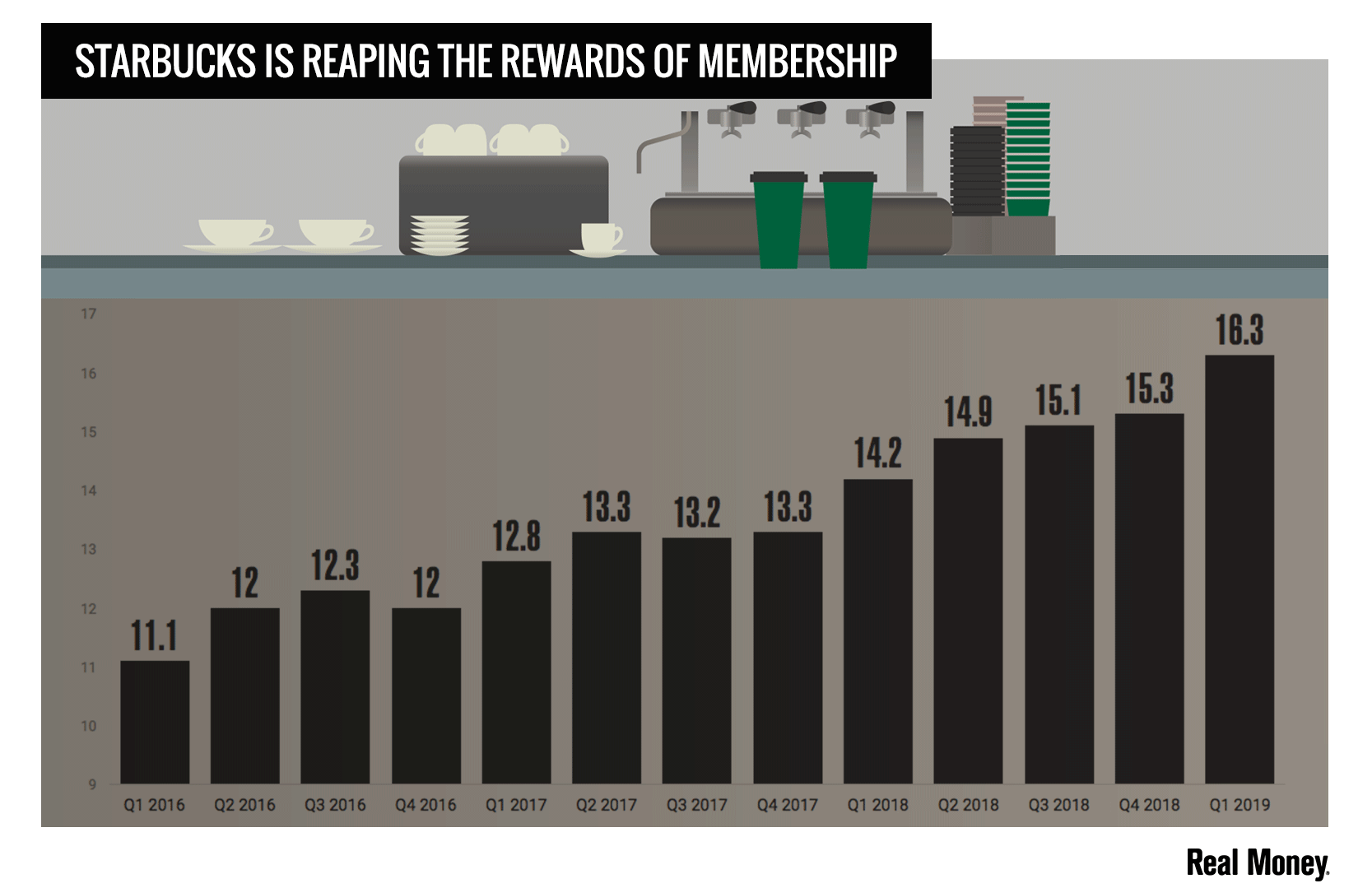 "This result was driven by leveraging our increased digital reach, as well as a more seamless customer onboarding experience, greater mobile order and pay adoption, and enhanced personalization features," CEO Kevin Johnson said. "Between digitally registered and active reward customers, we are now approaching 30 million digital connections in the U.S."

The non-member digital initiative is particularly additive, in line with consumer behavior according to analysts.

"We continue to view new digital initiatives, such as the ability to take advantage of mobile pay without being a loyalty member, as an incremental 1-2% same store sales growth opportunity in 2019," Wedbush analyst Nick Setyan said.

The company is making an effort to engage the existing digital relationships through an advertising campaign targeted at registered customers not engaged on rewards programs. Further, the company will open 20 stores in New York City to test a digital-only payment program aimed at fomenting momentum in digital. Still, the ambitious growth has shown signs of stalling in recent years and analysts remain somewhat skeptical on how quickly this can ramp in 2019.

"We have trouble durably modeling upside to Americas comps as the company is in early stages of implementation with digital/loyalty enhancements, but the timeline and practicality of this is uncertain," Cowen analyst Andrew Charles commented. "Further, operational enhancements to expedite thru-put are more likely to be an evolution rather than a revolution."

As such, he kept his rating on the stock at "Market Perform".

Possibly pushing estimates in the future is Johnson's focus on delivering shareholder returns by deepening its efforts in delivery services.

Chief among the growth narratives are the company's key partnerships, like that with Uber and its highly touted UberEats effort.

The delivery partnership with UberEats is charted to target one quarter of U.S. company-operated stores by April and continue to ramp from there. That too has encouraged same store sales growth targets to be raised among analysts.

However, the effort in delivery is perhaps most prominent outside of the U.S.

"We're focused on continuing to expand our digital partnership with Alibaba (BABA) ," CEO Kevin Johnson commented to analysts. "We have rapidly rolled out in less than 90 days to 2,000 stores across 30 cities and we're seeing a strong awareness being built."

He added that the effort, which pinpoints the over 600 million-person strong Alibaba user base, is seeing strong momentum especially in Beijing and Shanghai. The orders, according to the data so far, also generate higher cost orders than those observed at core stores.

Given the strength of the program and the digital initiatives, 13 analysts polled by FactSet increased their price targets, touting greater upside for the beverage leader despite lingering hangover risk from the ongoing trade war.

Action Alerts Portfolio Manager Jim Cramer was a bull as well, noting he thinks that shares could hit $72 per share, a still significant premium on the company's current share price.

To hear Cramer's take on the company's trajectory and its much-touted technology efforts, click here.

Get an email alert each time I write an article for Real Money. Click the "+Follow" next to my byline to this article.
TAGS: Earnings | Investing | Stocks | Food & Drink | Restaurants | Software & Services | Technology | China | Analyst Actions | Stock of the Day