Apple (AAPL) stock is generating some debate on price targets ahead of its Tuesday evening earnings release.

Shares of the formerly trillion-dollar tech name have wavered in morning trading as debate over the company's coming earnings continues.

However, as the market focuses on the guidance for the company, longer-term price targets will be pivotal to investors looking to play the Cupertino, California-based colossus.

With new initiatives in streaming, gaming, and health services coming up against headwinds from China and slowing iPhone sales, the bulls and bears are duking it out on what to expect.

Given the depressed share levels in recent months, many analysts are remaining confident in a bounce for the shares in 2019.

On Tuesday morning, the consensus rating for the stock among analysts remains a "Buy" despite target trimming and downgrades that have flowed in since the end of 2018.

"We rate AAPL shares Overweight given our favorable outlook on iPhone and Services revenues relative to investor expectations, catalysts to accelerate revenue growth, and upside risk to our base forecast," J.P. Morgan's Samik Chatterjee commented. "We see upside on several aspects of the business as well as financials that remain underappreciated by investors, namely the transformation of the company to Services, growth in the installed base, technology leadership, and optionality around capital deployment ― all of which together leads us to expect double digit earnings growth and a modest re-rating for the shares."

He set a $228 price target for AAPL shares, noting that the company could be poised to carry through as shorter-term risks on iPhone sales and Chinese trade are alleviated in the long term.

D.A. Davidson equity analyst Tom Forte likewise stated the he continues to find Apple shares attractively priced at the current levels that have discounted the company's valuation by billions from its highs. 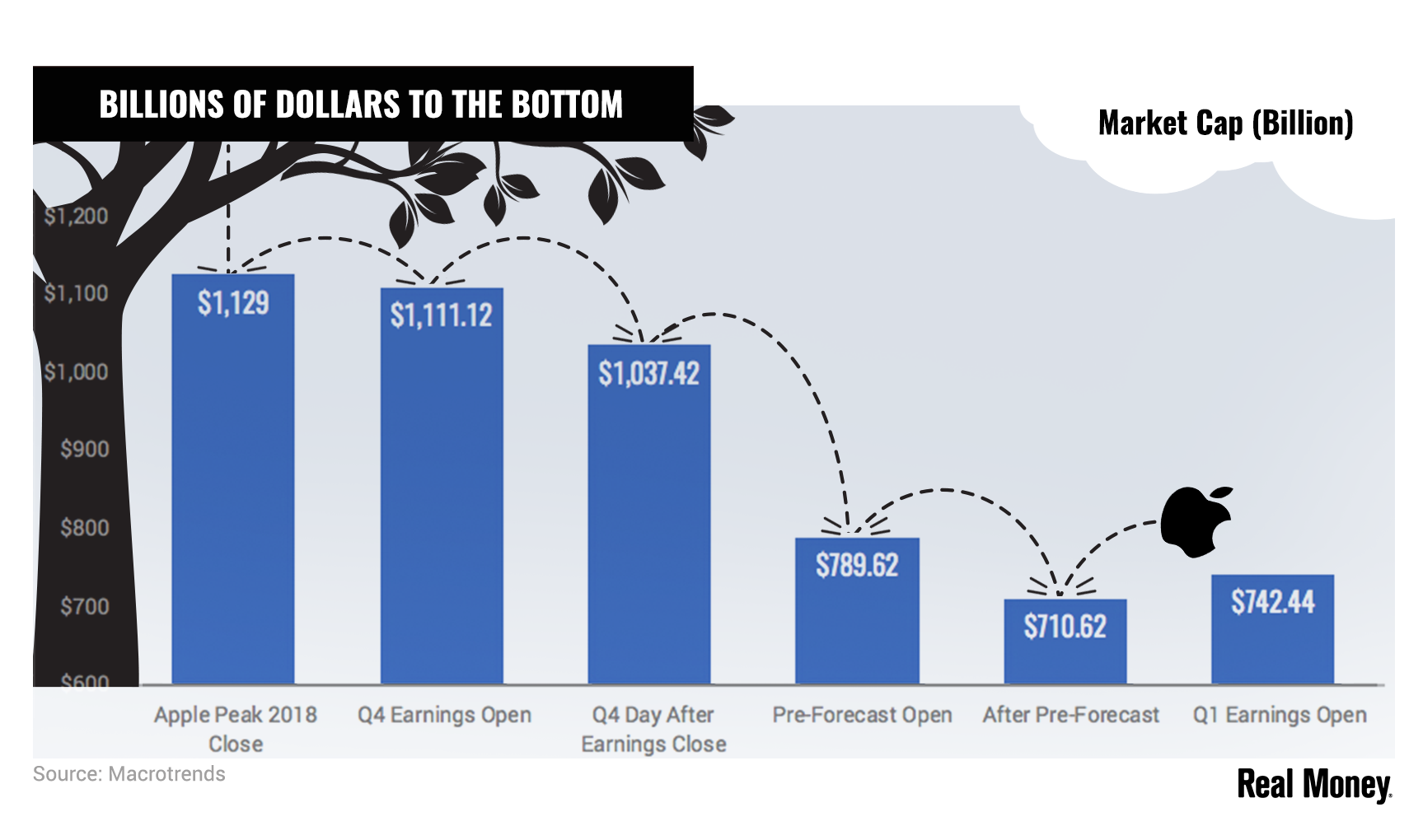 "While disappointed by the weaker-than-expected iPhone sales, we were encouraged by the performance of its other products and services in the December quarter, with nearly 19% growth," he commented. "We look to April/May when management has historically updated its plans for its buybacks and dividends. We see the potential for it to increase its buyback from its last $100 billion authorization."

Forte set a $245 price target that, while tempered from its $280 level prior to the pre-forecast, is the highest estimate on Wall Street. The move would suggest an over $100 move from the stock's 2019 lows.

"We remain confident in management's ability to find the next big product opportunity given the company's track record from Mac to iPod to iPhone to iPad," he explained in a note touting the lofty target.

One such initiative could be the company's rumored release of a gaming service that is being called a "Netflix (NFLX) for gaming".

Even the rumors alone from the tech giant have helped send GameStop (GME) shares spiraling on Tuesday as that company also foregoes a sale. The outsized move suggests the industry impact such a service could affect.

Further, the company's inroads into health care could prove a strong long-term thesis as CEO Tim Cook touts it as the overarching legacy of the company that Steve Jobs started.

"I believe, if you zoom out into the future, and you look back, and you ask the question, 'What was Apple's greatest contribution to mankind?,' it will be about health," Cook told Jim Cramer in an interview earlier this month.

These factors coupled with the company's entree of Apple Pay to retailers like Target (TGT) and Yum Brands'  (YUM) Taco Bell to foment services revenue could be catalysts that are underappreciated in the view of bullish onlookers.

The technical indicators are an additional bull boost according, to Real Money technical analyst Bruce Kamich.

"Overall, the charts and indicators of AAPL look constructive and I would prefer the long side heading into today's close," he commented in his Tuesday morning column.

Still, as Apple's pre-forecast largely vindicated those with bearish outlooks earlier this month, many remain pessimistic.

Action Alerts PLUS portfolio manager Jim Cramer warned that there are only negative indicators coming through and that even the paltry P/E ratio touted by analysts won't help now.

Cramer added that in his analysis of historical pre-announcements, stocks generally remain lower for the following quarterly report. Given the confluence of bearish indicators, he remained pessimistic on the popular stock.

"We view the overall risk/reward on AAPL as neutral," he said. "While the Company's buyback and historically strong customer loyalty provide some measure of protection, we see little to cure the unit and pricing challenges faced in the iPhone segment and expect Services revenue to decelerate, with growing risk of regulatory scrutiny."

The regulatory scrutiny cited by Hargreaves includes a case before the Supreme Court that could serve to seriously curtail the company's App Store revenue stream due to its monopolistic practices. If the highest court were to find against Apple, the narrative shift from hardware to services would incur a serious blow and foment the expected deceleration significantly.

Just recently, top revenue drivers like Netflix, Spotify (SPOT) , and Fortnite creator Epic Games have voluntarily left the platform in order to avoid the exorbitant fees charged for App Store hosting. If that trend holds, the company's segment may remain challenged even without legal action.

The regulatory risk may spread as well, as bugs acknowledged by the company in its FaceTime feature are likely to draw Facebook (FB) -like questions from Congress.

Hargreaves set a price target at $150 for the stock with a "Hold" rating. The price target is the lowest among major firms surveyed by FactSet and comes in nearly $100 lower than the target set by  D.A. Davidson's Forte.

In the end, even bullish analysts like J.P. Morgan's Chatterjee noted that management's commentary on the company's ability to mitigate the myriad of risks will be pivotal to the stock in the medium to near term.

Even amid low expectations, the significant concern from investors will need powerful commentary to correct.

"We believe despite low expectations heading into the announcement, there is little likelihood that the firm can address some of the major investor concerns just yet, and the stock price reaction is more likely to be range-bound," Chatterjee concluded.

He added that CEO Tim Cook will need to signal some dovish indicators on this important region during the company's after-market earnings call to have the shares react meaningfully to the upside.

The ball is in Cook's court at this point.

Get an email alert each time I write an article for Real Money. Click the "+Follow" next to my byline to this article.
TAGS: Investing | Stocks | Software & Services | Technology | Technology Hardware & Equipment | Telecommunications | China | Analyst Actions | Stock of the Day