By BRUCE KAMICH May 19, 2022 | 02:26 PM EDT
Stocks quotes in this article: UNP, NSC, CSX
As three railroad stocks -- Union Pacific ( UNP) , Norfolk Southern ( NSC) and CSX Corp. ( CSX) get downgraded, traders familiar with the Dow Theory may be asking whether this is another "nail in the coffin" of the secular bull market. Let's check out the charts of CSX for clues.
In this daily bar chart of CSX, below, we can see that prices have been a choppy affair the past few months. Prices have weakened in the past four weeks or so, but we don't see the kind of longer-term declines visible on so many other charts.
The slope of the 50-day moving average has turned negative recently, but the 200-day moving average is still positive. The On-Balance-Volume (OBV) line declined from November to March, but has since improved. The Moving Average Convergence Divergence (MACD) oscillator is bearish, but may not be far from a cover-shorts buy signal.

In this weekly Japanese candlestick chart of CSX, below, we see a mixed picture. Prices have turned modestly lower and now trade below the cresting 40-week moving average line. The weekly OBV line shows only modest weakness the past three months. The MACD oscillator is pointed down and close to the zero-line, but it has not (yet) crossed the line. Are we splitting hairs?

In this daily Point and Figure chart of CSX, below, we can see a downside price target of $28. Not too bearish. A rally to $32 should turn the chart to an up column of X's.

In this weekly Point and Figure chart of CSX, below, we see only a $31 price target. 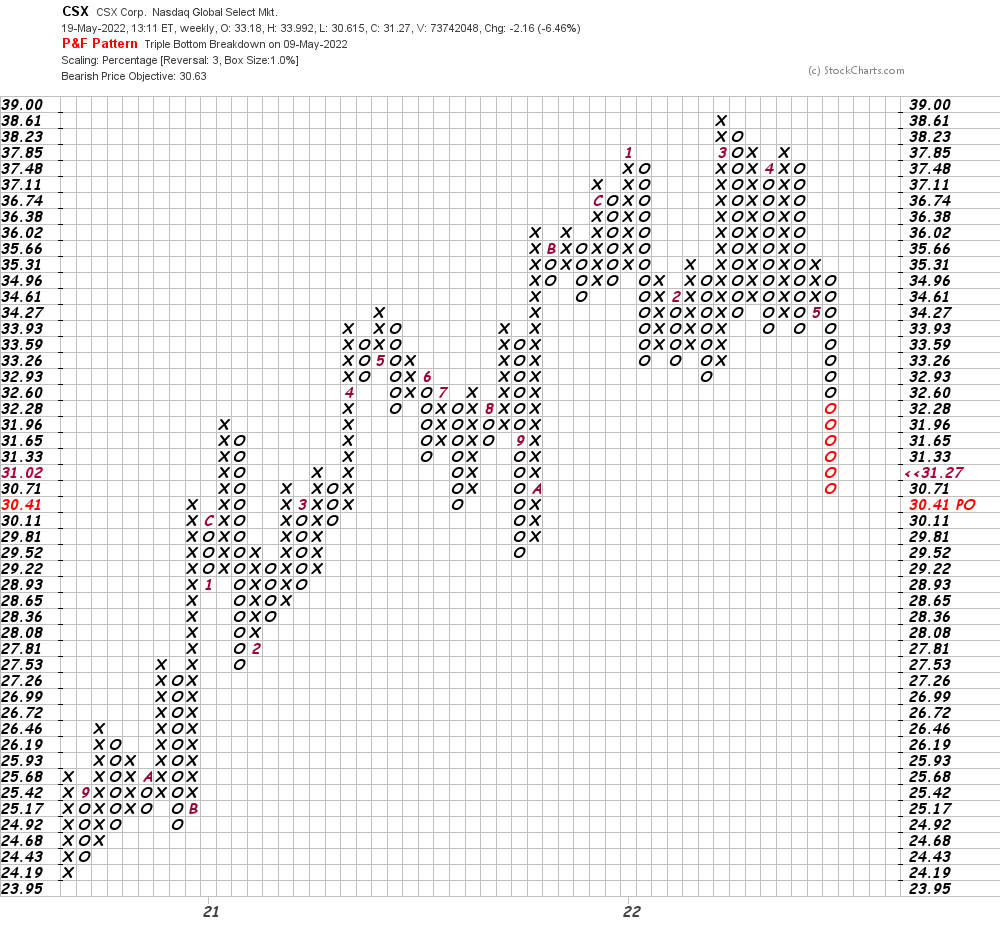 Bottom line strategy: Charles H. Dow did not set out to make a trading tool. He did not coin the term "Dow Theory." What he aimed for was an indicator of the economic conditions of the time. Remember this was way before all the economic data series we now have today.
He put together a short list of industrial companies and a short list of railroads. What he saw in the movement of the average price of the "industrials" he wanted to see it be "confirmed" by the movement in the "rails." Dow never imputed any special powers to the rails. He may have decided to find some other group of stocks for confirmation. Dow wanted to avoid false signals, because he knew that stocks could be manipulated. It would be harder to manipulate two averages.
Today we move goods and people by the "rails" but also trucks and planes.
The charts of CSX are not particularly bearish and we could see them recover in the weeks ahead.
The Dow Theory has worked for about 120 years but like other things it needs some fresh interpretation.
Get an email alert each time I write an article for Real Money. Click the "+Follow" next to my byline to this article.
TAGS: Investing | Technical Analysis | Transportation | Analyst Actions