George Armstrong Custer graduated last in his class from the United States Military Academy at West Point in 1861. The Army was engaged in a rapid expansion throughout the early years of Custer's military career as the American Civil War would last through 1865. Custer served with distinction throughout the war, famously surprising Confederate cavalry on the outskirts of Gettysburg in July of 1863. Custer would serve at both the brigade and division command levels, his career peaking at the rank of Major General (two stars), incredibly as a 25 year old.

In the days after the Civil War, the U.S. Army needed to thin out the ranks drastically for fiscal purposes. This would happen again after World War 11. Career soldiers would have to accept substantial reduction in both rank and responsibility if they were lucky enough to remain employed by the Army at all. At the time of his apparently reckless death in 1876, Custer commanded but a regiment, as a Lt. Colonel. Kind of reminds me of General Electric (GE) in a way.

It seems to me that I am writing more and more about General Electric of late. There was a day, not to long ago, that bravado, and arrogance had led the firm into their own Little Big Horn. Down the stock went seemingly forever. Warren Buffett headed for the exits in the high $20's. The firm changed CEOs, tried to restructure, tried to rid itself of a myriad of debt and pension related issues, not to mention less than productive business lines. The shares sunk even lower. The firm cut the dividend. The shares went lower still.

Then it happened. GE changed CEOs yet again. This time, they brought in not another loyal citizen, but a proven value creator with a track record. They hired Larry Culp, former CEO of Danaher Corp. (DHR) . The value creator needed to work fast, and it looks like he is. After a year where the firm lost $90 billion in market cap, and its coveted spot among the 30 blue chip members of the Dow Jones Industrial Average, the firm had also suffered a loss in reputation, not to mention credit rating. Culp slashed the dividend again.... to a penny, and accelerated the intention to sell off non-core businesses in order to raise cash just to meet obligations. Baker Hughes (BHGE) is the low hanging fruit. On Friday, news broke that Apollo Global Management (APO) was considering making a bid for GE's jet leasing business. This is considered a key asset among those that GE might sell, so they have to get this right, and talk is that the unit could fetch as much as $40 billion. That would go a long way towards satisfying a black hole that could amount to an estimated $100 in net liabilities. 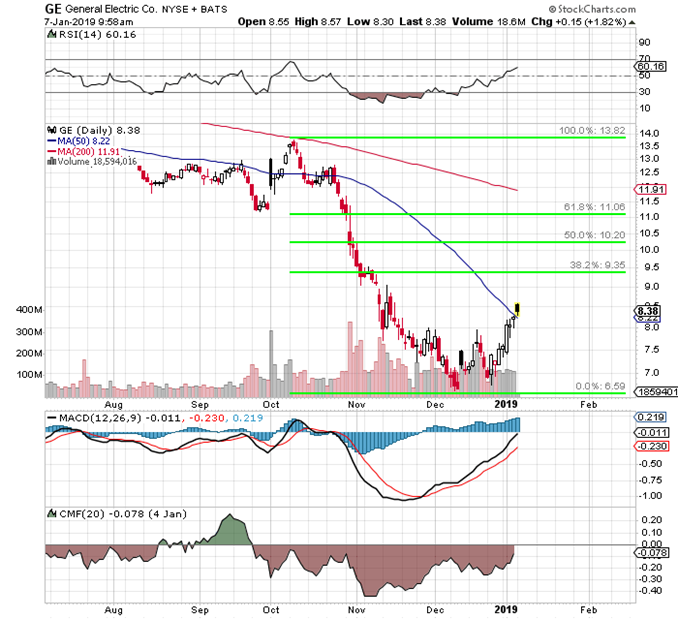 First off. I have the "Stocks Under $10" portfolio in this stock since December 14, and we are up 19% in the name. Think I lie? Matter of record. Personally, I am short a cascading series of GE puts that expire in June. I've been short those since well before I pulled the trigger for the SU $10 crowd. The fact is that if I did not run the SU $10 portfolio, I would have bought these shares for myself instead of for the people. Sometimes, one must take a pass on opportunity when one sees the potential for a conflict in interest. The firm reports fourth-quarter results later this month. consensus view is for EPS of $0.22 on revenue of $32.12B. If the firm realizes that revenue number, that would represent year over year growth of 8.5%, or a lot more than the 6.3% growth expected for the S&P 500 in aggregate. $32,12B would also be the highest revenue print for this firm since third-quarter 2017. Yes, the firm now has a shot. The potential benefit of risk vs. reward is no longer this firm's enemy.
General Electric, the stock:
Target Price: $10

Get an email alert each time I write an article for Real Money. Click the "+Follow" next to my byline to this article.
TAGS: Investing | Stock of the Day