There are many types of cats. There are scaredy cats. In fact we saw quite a few of those this morning. There are fat cats, or maybe there used to be. Haven't seen one of those in along time. Years in fact. If one is stumped and needs to explain a market retracement, there's the dead cat. Your pal does not believe in those. There's always a reason even if we don't know it. There's the cool cat. Hey, where did I leave my shades? Did I happen to omit any other significant cats. Copy cats? I see you. How about Caterpillar (CAT) ? Now, that's one important cat.

Readers will recall that way back (a couple of weeks ago) when the 3 month/10 year Treasury yield spread turned positive that I mentioned that if it held that I would start migrating my main trading portfolio from the very defensive to a more value oriented approach. Cat Tractor, which is what we used to call that name on the trading floor, was one of the very first out of cash allocations made for that reason, and the shares indeed had a heck of a run into earnings.

Let's Get One Thing Straight

There are reasons that I believe Caterpillar deserves my attention as well as my investment. Yes, I saw the third quarter results. A nasty miss on the top line that produced the first quarterly year over year contraction in sales since the cows came home. Maybe longer. An even nastier miss on the bottom line. In fact, a second quarterly contraction for EPS in a row. Let's get one thing straight. If this game was easy, everyone would do it, and you and I? We would find something else to do. That said, let's unsheathe our sabers, Let's terrify our opponents with a guttural roar and in the sheer joy that only challenge can bring to the soul, wade into the melee before us.

Revenue performance breaks down by segment as one might expect in a planet wrestling with a reduced environment for cross-border commerce that has produced slower economic growth across many fronts. Construction Industries and machinery, Energy & Transportation, easily the two largest components experienced growth of -7% and -6%, respectively. There was a bright spot. Sales for the Construction Industries segment derived within North America saw an increase of 3%, not to mention a 12% increase (though a much smaller number) in these sales out of Latin America. That, unfortunately was offset many times over by a 29% decline for this segment in the Asia/Pacific region.

That's right. This name is a play on U.S. trade with China. Plain and simple. A deal is reached, and I believe we'll watch this one take off. Negative trade headlines, and your old pal will be left with a new project in risk management. For the time being, net cash provided by operating activities stabilized from the same period last year, actually experiencing a slight uptick. That might surprise.

That does nothing to change the fact that the quarter is disappointing, as is the guidance. 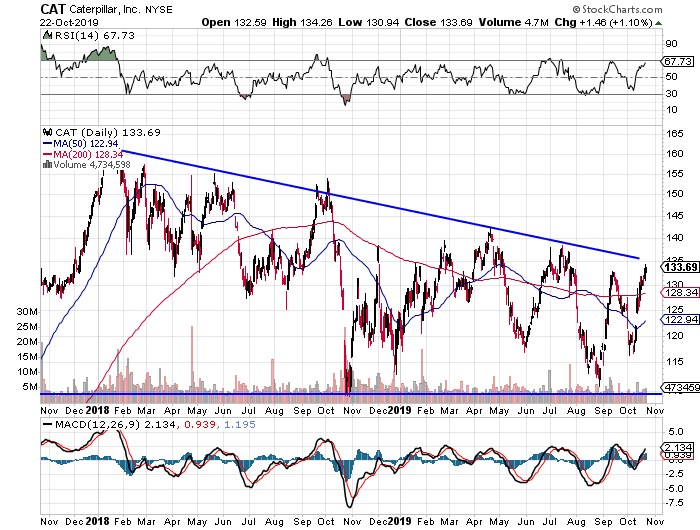 Going back two years, the chart shows nothing but a continuous line of lower highs. Not a positive. Yet, there seems to be base long-term support between $110 and $115. The shares are trading about 1% lower on Wednesday morning just after the opening bell as I submit this piece. I would however still expect some volatility. I will add to my long on any selloff that were to test the 200 day SMA at $128. Bear in mind that with the 50 day SMA moving below the 200 that there is potential at some point in the short to medium term for a "golden cross" which would in all likelihood provoke a bullish algorithmic reaction at that time.

Well, for starters, the shares trade at just 11 times forward looking earnings. The Industrials as a sector in aggregate trade at about 16 times. Secondly, if you think there will be a trade deal, this is in my opinion is a good pick. Third, the firm pays shareholders to stick around. At an annual dividend of $4.12, the shares yield more than 3%, and in addition, Caterpillar just this past summer revealed a target of at least high single digits in percentage terms increases to this dividend over the next four years. My target for these shares is a very achievable $140.

Get an email alert each time I write an article for Real Money. Click the "+Follow" next to my byline to this article.
TAGS: Earnings | Investing | Markets | Stocks | Technical Analysis | Trading | Construction & Engineering | Industrials | China | Stock of the Day