On Tuesday morning, Dow component Caterpillar (CAT) released the firm's second quarter financial results. The crowd was not pleased. CAT posted adjusted EPS of $3.18 (GAAP EPS: $3.13) on revenue of $14.247B. While these bottom line results did beat Wall Street, and the top line did grow 11% from the year ago comp, that sales number also fell (slightly) short of consensus view.

Construction Industries grew sales 7% to $5.656B, as favorable price realization offset a negative impact from currency exchange rates and a slight decrease in sales volume. This produced a segment operating profit of $989M, which was down 4%.

Energy & Transportation grew sales 15% to $4.975B as the firm benefited from favorable price realization as well as increased sales volumes despite a negative currency exchange rate impact. This produced a segment operating profit of $659M, which was down 11%.

Resource Industries grew sales 16% to $2.547B as the firm benefited from favorable price realization as well as increased sales volumes despite a negative currency exchange rate impact. This produced a segment operating profit of $355M, which was up 2%.

CAT ended the quarter with a net cash position of $6.014B, which was down more than $3B over six months, while inventories expanded by almost $2B over that same time frame to $15.881B. This took current assets down a rough $1.5B to $41.982B. Current liabilities amounted to $28.963B, which is roughly in line with where that entry was at year's end.

The firm has on the books $5.741B in long-term debt now considered current. This brings the firm's current ratio to 1.45, which is fine. The firm's quick ratio works out to 0.90, which is not what I like to see. Given the current environment and the need for a business like this to stack inventories, I think maybe we don't harp on the current ratio, but instead keep an eye on its development.

Total assets amount to $81.107B including $7.084B in "goodwill" and other intangibles. At 8.7% of total assets, for a global business, this is certainly not abusive. Total liabilities less equity comes to $65.348B including $26.219B in long-term debt not labeled as current and $5.16B in pension liabilities. Caterpillar can meet short to medium-term obligations and cash needs. That said, $6B in cash doesn't seem like a lot when it stands against $31.96B in debt, especially when $5.741B worth of that debt is due in less than one year.

Obviously, I am not very impressed. What could help would be the launch of large fiscal infrastructure packages both here and abroad. That said, I don't think Congress should be very aggressive fiscally at least until inflation is much lower and interest rates are returned to a stable environment. I don't think too many foreign governments are thinking about being fiscally aggressive right now either. That means that CAT is on its own and will have to rely upon a return to economic growth. How to time such an event?

Bottom line... I think CAT is going to have to find a new discipline in improving the balance sheet that has just not been there. I don't care if CAT yields more than 2.3% and opened down a few percentage points this morning. I have no problem with an interest in trading the stock short-term. Investing in CAT is a tough argument to make though. 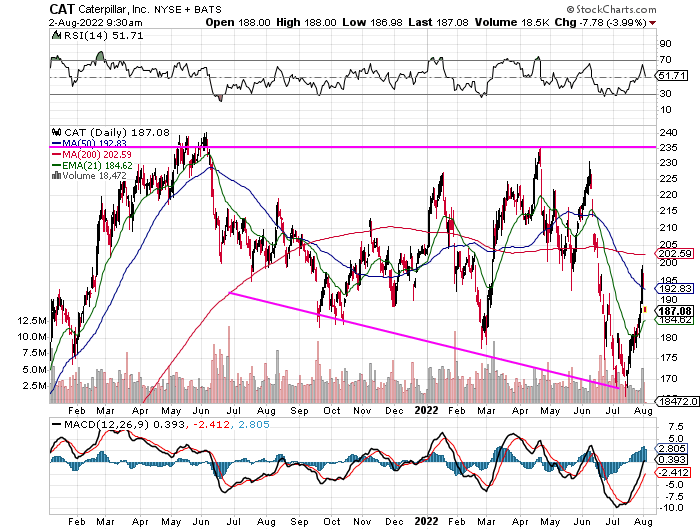 Readers will see that resistance has been hit repeatedly over a year and a half up in the $230's. Support however has been working its way lower, with a series of lower lows in place since June of 2021.

The stock has given back its 50 day SMA and 21 day EMA this morning. That will turn the swing crowd against the stock, and if that 50 day line is not quickly retaken, it could force a number of portfolio managers to reduce exposure.

Get an email alert each time I write an article for Real Money. Click the "+Follow" next to my byline to this article.
TAGS: Earnings | Economy | Investing | Stocks | Technical Analysis | Trading | Construction & Engineering | Industrials